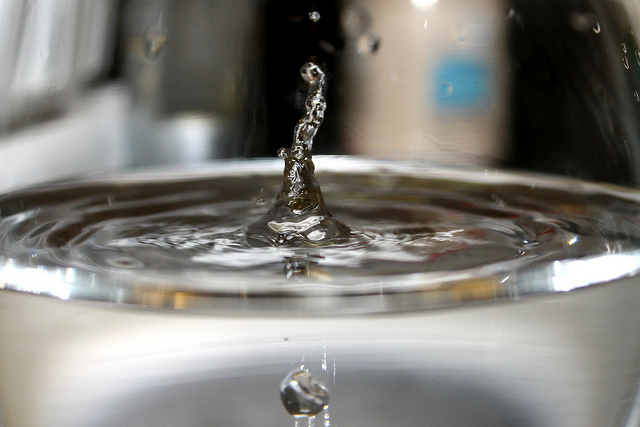 One of the things I’ve learned from writing daily devotions over the last eighteen months is that biblical passages stretch further than we sometimes imagine. Indeed, what I’ve really learned is that sometimes we need to stretch them to make them useful to us. This Sunday’s parable is a prime example. But I’d like to address one thing up front about the parable before inviting you to consider stretching it.

A lot of folks — especially folks who come from traditions descended from the Reformation — become rather uncomfortable in the presence of parables like this one because we fear it runs contrary to our notions of “justification by grace through faith.” After all, if the rich man and Lazarus are both translated immediately to different conditions in the afterlife based entirely on their actions and condition in their earthly lives, what room is left for grace or faith? Two things in response.

First, a parable is a parable, not a complete systematics. Parables aren’t told to give you a complete theological system or to address ultimate questions once and for all. They are meant to give us a glimpse — often surprising, even jarring glimpses — into the kingdom of God. They present various slivers of the “kingdom logic” of the God who regularly surprises us with God’s compassion and concern. So maybe this parable isn’t interested in explaining to us how people get to heaven but rather invites us to look at the people around us — right here, right now — from the perspective of this peculiar logic of God.

Second, and related, should we be surprised that this parable conveys that God is really, really concerned for the poor? God’s unrelenting care and compassion for the poor and vulnerable is a major topic of both testaments. So if this parable seems to push that concern to the extreme, perhaps it’s to grab and refocus our attention on a theme that is consistently present in Scripture but only inconsistently present in our thoughts and actions.

Having said that, I want now to invite you to stretch the parable by imagining a different one, or at least a different ending. I’ve long thought that the chasm set between the rich man and Lazarus in heaven is only the manifestation of the one that existed in their earthly lives as well. Although the rich man apparently made no attempt to relieve the suffering of Lazarus, it’s not that he didn’t know him, or even that Larazus was invisible to him. After all, in the afterlife he not only recognizes Lararus but refers to him by name. Moreover, he continues to treat Larazus as if he were a servant, asking that Abraham send him to bring a drop of water and, failing that, to warn his brothers. The rich man, that is, continues to fail to treat Larazus as a person, as an equal, as one deserving of compassion and regard.

Must we continue to act that way? Might we imagine a different ending to this parable? Indeed, given Abraham’s reference to a man rising from the dead, aren’t we invited to? We have, after all, seen a man put to death for caring for the poor, for announcing God’s mercy for all, for daring to forgive the sins of any, and we have heard the testimony that this man was raised from the dead and vindicated by God as the supreme embodiment of God’s kingdom logic and royal love.

Many good sermons on this passage have invited us to identify with Lazarus or, more frequently, with the rich man who paid Lazarus no heed. But could we this time instead imagine that we are one of the rich man’s brothers and sisters and that though we have the law and prophets yet God saw fit also to send a man from the dead to awaken us? In this context, I’m struck by how small are the requests the rich man makes: a drop of water, a messenger to tell others. Might we not do these very things, bringing a measure of relief to others and telling all we meet that God desires we care for each other?

Three years ago I suggested that you stretch your congregation’s sense of stewardship and agency by giving them each a dollar and asking them to report back how they used it to exercise care for the poor and vulnerable as is clearly God’s command and intention. Many of you shared that your parishioners reported this as one of the most impactful sermons they’d heard in some time. This year I’ll invite you to do so again, but in addition to commit the congregation to do the same as a community.

Given the vividness of the parable, I’d suggest that this Sunday might be a good time to remind folks that there are today few needs greater than that for clean water. Many agencies offer us an opportunity to contribute to bringing a drop of cold water to our neighbors. Lutheran World Relief, for instance, can provide an emergency water filter to those coping with disaster for just $35 and a whole irrigation system to a community for $2,500. Can we imagine committing ourselves as a community of faith to directing some of our funds to bringing water to those in need and then inviting others to do the same?

If we do, the results will be amazing. Did you know, Working Preacher, that even in this age of relative decline of church attendance, going to church is still the one thing that more U.S. citizens do than any other shared activity? That’s right, more people show up in church each week than view any particular television show, participate in any volunteer activity, or even watch football on Sunday afternoon. Imagine, for a moment, harnessing that audience to share water with a neighbor and tell others about it!

So this week, Working Preacher, remind us of the barriers that exist already between us and those who are less fortunate. But also remind us that this is a parable, not a prediction, and that we have the power to rewrite the ending. Remind us, that is, that we are those who have seen a man raised from the dead and that in his name we are both able and committed to sharing water, love, and good news with all those in need.

Thanks for your good efforts, Working Preacher, they make more of a difference than you’ll ever know. For you not only bear witness to God’s law but also to God’s grace, the grace of the Risen Christ that empowers us to stretch our imaginations and lives and share God’s love with all. Thank you. Thank God for you.