Matthew’s Version of the Incarnation 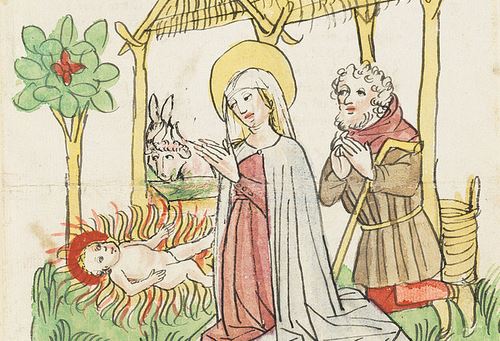 First, notice the turmoil in the holy family. I mean, think for a moment about the upset and distress that must have consumed both Joseph and Mary upon learning that Mary was pregnant.

A word about first-century Jewish marriage may help explain what I mean. Various texts render this passage differently. The NRSV describes Mary and Joseph as “engaged.” The NIV describes them as “pledged” to be married, while the KJV says Joseph was “espoused” to Mary. No matter how you render it, however, it’s important to note that the bond between Mary and Joseph at this time was contractual, not merely social, as would be the case when talking about “engagement” in our day. That is, espousal/betrothal/engagement constituted the legal contract and pledge of marriage. The wedding itself was the time when the bride and groom were accompanied by friends and feasting to celebrate the occasion of actually joining their households.

For all intents and purposes, then, Mary and Joseph were married but had not yet moved in with each other or consummated their union. Hence the turmoil created by discovering that Mary was pregnant. It could, as far as Joseph was concerned, mean only one thing: that his espoused wife had been unfaithful. And this is why Matthew describes Joseph as a righteous man — he lives according to the law. And so, wanting out of what he believes is an unfaithful union, he has two options — public stoning or divorce. He opts for the latter course, not wishing, as Matthew describes, to expose her to public disgrace and, presumably, punishment.

Some contend that the jury is still out on whether Joseph actually was a righteous man, as they believe he should have explored other options, that he did not need to dismiss her, that such an action would have condemned Mary to poverty, if not death. I don’t know enough about first-century customs and possibilities to offer a helpful judgment. But for just a moment, I’d invite us to tarry at this point of the story, and imagine the great distress that fell upon Joseph (and Mary if he made his intentions known to her).

We’re not used to this. We’re accustomed to thinking about the beauty and wonder of the birth of Jesus, and that’s appropriate. But let’s not forget the distress, sense of betrayal, disappointment, and a host of other emotions that Joseph must have experienced, or the fear and hurt that Mary would likely have also felt as they sorted out their divinely complex relationship.

Why might that be helpful? Because Mary and Joseph aren’t merely characters from a stained-glass window, but flesh and blood people. And the more we can imagine them as people like us — with ups and downs to their relationships, for instance — the more we might imagine ourselves to be people like them — that is, people who go through all kinds of things, some quite damaging, and yet whom God uses nevertheless to accomplish God’s purposes.

Second, notice the extreme brevity of Matthew’s account. I mean, the whole “birth narrative” takes up just two bracketing verses. Actually, just one and a half: 1:18a — Now the birth of Jesus the Messiah took place in this way. And 1:25 — [Joseph] had no marital relations with her until she had borne a son; and he named him Jesus. Yeah, that’s it, two verses book-ending the larger story and drama of the turmoil this birth created.

Which kind of begs the question: Could you start your depiction of the life of the Messiah in a more matter-of-fact way? One-and-a-half measly verses. If you sneezed, you might just miss it.

But while I miss the fuller description Luke gives — with mangers and shepherds and angels and all the rest — there is something fitting about Matthew’s spare depiction. Because, truth be told, most people did miss it. The local news team didn’t follow Mary’s pregnancy the way they might a sports playoff or presidential election. There were no camera crews or gaggle of first-century reporters awaiting the birth. There were no baby showers beforehand or christening invitations afterward. From all we can tell from Matthew’s story, just about no one noticed.

Which is why Matthew wrote, of course. He lifts his pen to record, if only in a few sentences, the birth of Jesus, the Messiah, and in this way bears witness to an event most of the world ignored. Except it wasn’t as if the world actively ignored anything. It was just a birth, like millions of others, unremarkable in every possible way.

Which is, once again, the point. Jesus came as one of us. Jesus was born like we are, lived as we live, loved and laughed and suffered as we do. And died as we will die. And on the third day, God raised him from the dead, that we might no longer live in fear of death.

But I’m getting ahead of the story. For now, we should wait, content with Matthew’s spare story, his odd version of the Incarnation. For Matthew paints a picture of the utter normalcy of the holy family. Which means, of course, he tells us about the complexity, the confusion, and the frailty that attended this family, just like every other family. Indeed, there is nothing exceptional about this couple or birth … except that God works through it to save to draw near to us in love, grace, and salvation.

So preach this extraordinary story and promise, Working Preacher: that God comes through ordinary, mixed-up people in order to save ordinary, mixed-up people, and that God comes through a birth like all the millions of other births in the world to promise us freedom from sin, fear, and death and rebirth as the children of God. It’s an odd story, for sure, but one that deserves telling. Thanks for your part in doing that.

Blessed Advent and Christmas, Working Preacher. I know this is a crazy time, and that you’ll be working like the dickens to get everything done. But know that your labor is not in vain, and know as well that even as I give thanks for your faithful labor I also pray that you, too, will experience Emmanuel, God with us, during this hectic and holy season.