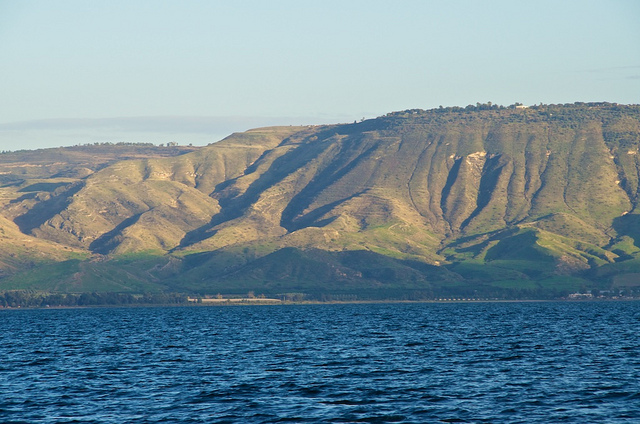 I remember an English professor somewhere along the way saying there are only seven or eight great themes in literature — the struggle of human against nature, human against human, unrequited love, the quest for a better life, etc. I often think the same is true of preaching, and if you’re willing to risk it this week, the Gospel reading in front of us invites us to take up one of them.

I say “risk” because anytime you tackle one of the great themes not just of literature or preaching but of life, you will cause a stir, touching a place deep in your hearers and setting off a chain of reactions that you cannot control. So while I think it’s definitely worth the risk, if you’re going to preach this message you might want to clear a little more time than usual in your calendar in the week after your sermon for pastoral conversations. 🙂

When he gets there, he’s confronted immediately by a man who is possessed. Actually, he’s more than possessed, he’s occupied. Because that’s what a legion was — a unit by which the Roman military organized itself. And this guy isn’t possessed by just one unclean spirit, but rather he’s occupied by a host of them — dozens, hundreds, more? We don’t know, though for what it’s worth in the Roman army “legion” designated 6,000 soldiers, so we can be pretty sure that Luke employs this term to impress upon us that it was a lot!

I find it devastating that he has no name, no identity left, except for what he is captive to.

His story is tragic — he’s alone, wandering the tombs (a place of utter desolation and uncleanness), and clearly a frightening hazard to himself and to others. But Jesus heals him, sending the host of demons to inhabit and drive mad a herd of pigs. (Keep in mind that although this detail may trouble those of us who are fond of animals, losing a herd of pigs would have been no big deal to a first century audience, especially those from or familiar with Judaism.)

In response to this healing, people are amazed (and a little uncomfortable, perhaps?), the man is grateful and wants to follow Jesus, but Jesus tells him to stay where he is, sharing word of what God has done for him in his own homeland.

Perhaps by now you’re wondering why I think this is such an important an potentially risky story. It’s because I believe this story is, at heart, about identity — his identity and ours. The heartbreaking moment in the story for me is when Jesus asks the man his name and one of the horde answers, “Legion, for we are many.” I find it devastating that he has no name, no identity left, except for what he is captive to. It’s not Elijah, or Isaac, or John, or Frank, or Jo-Jo; it’s Legion. He has been completely defined by what assails him, by what robs him of joy and health, by what hinders him and keeps him bound, by all those things that keep him from experiencing life in its abundance.

And here’s the thing: I think a lot of us aren’t all that different. Don’t we also tend to define ourselves in terms of our deficiencies and setbacks, our disappointments and failures? Not always, of course, but enough to rob us of the abundant life God hopes that we experience and share. Why is it that every time we want to take a risk and in this way be vulnerable, we are reminded of every failure, every disappointment we’ve experienced before? Perhaps because we’ve allowed these things to possess us. We, too, are Legion.

Moreover, we live in a culture that seeks to create in us a palpable sense of lack. The majority of advertisements we see or listen to have as their goal creating in us a powerful sense of insecurity. Whether they focus on our looks or status, our possessions or our relationships, they try to create in us a sense of insufficiency that can only be remedied by buying the product being advertised. And all too often we comply. Not always, of course, but take a look around your home and notice for just a moment how many things you bought that you just didn’t need. Not even a little bit. Why did we buy all this stuff? Because we believed the promise the product made, but before we could believe its promise we had to believe its claim: that we are insufficient. We, too, are Legion.

A striking but often overlooked element of this week’s gospel story is that after healing this man, Jesus sails away again. Which means that all he did in the land of the Gerasenes was heal this one possessed man. Which might mean that Jesus’ whole detour into this strange and unfamiliar place was to do just that, to rid this man of his demons and transform him from being Legion to being a human being again, a human being who was also a beloved child of God.

Jesus is still crossing boundaries to do just that. He is still coming into the strange and unfamiliar world of our failure-ridden and lack-driven lives to cast out our demons. Jesus says to us again and again that we are more than the sum total of our past failures and disappoints. We are God’s beloved children, forgiven of our sins, healed of our disappointments, and blessed with an open future. So also Jesus comes to tell us that no matter how many ads we see telling us the contrary, we are not insufficient or undeserving of love. Indeed, I would argue that the whole point of Jesus’ ministry and mission is to tell us — or, rather, show us — just how much God loves us.

Do you see what I mean? This story is really about identity. The Gerasene man Jesus encounters lost his amid the legion of demons, but Jesus gave it back to him. So also Jesus gives us our identity. It’s the identity first announced to us at baptism, when we were washed with water, marked with the cross of Christ, and sealed with the Holy Spirit … forever. And so when we lose our identity, when we feel trapped by our past hurts or possessed by a culturally-induced sense of lack, we’re bidden to come back to church in order to have those demons cast out, our identity restored, and be reminded once again of just how much God loves us.

It’s a cool story, isn’t it? And more than that, it’s powerful, because it dares to call so many of the identities foisted upon us a lie and invites us to receive once again our God-given identity of being a beloved child worthy of love, honor, and respect.

Nowhere is that made clearer than in baptism, when God announces God’s unconditional love for us and publically declares us God’s beloved children. So perhaps, Working Preacher, this week we should remind our people of their baptismal identity that stands over and against all those other false identities the culture throws their way. Maybe we could invite people to the baptismal font and mark the sign of the cross on their foreheads and remind them that they are God’s beloved children. Or perhaps, for time’s sake, we could have multiple stations where we could do this. Or maybe we could pass around small bowls of water and have people trace the cross on each other’s foreheads with water while saying this simple but powerful affirmation: “Never forget, you are a beloved child of God.” If we would try this, I think we would be living out Jesus’ instructions to this man to tell others of what God has done for us.

There are lots of possibilities, I’m sure, Working Preacher, and I don’t know which might be best for your setting. But I do know that this message needs to get out. There are so many voices trying to possess and discourage us that we might still call them Legion. Yet against all of them stands the still, small, but mighty voice of the one who still crosses oceans and boundaries to tell us of God’s love and call us back to our right minds and grace-filled identities. Thanks to be God.

Which reminds me, Working Preacher: thanks be to God for you as well, for on this Sunday and on so many other days, you are the one who bears and speaks this life-giving Word of mercy and grace.

Note: Thanks to Tim Delkeskamp and the rest of our Biblical Preaching Doctor of Ministry (D.Min.) class this past week, as Tim’s sermon and the great conversation we had around it greatly influenced these reflections.