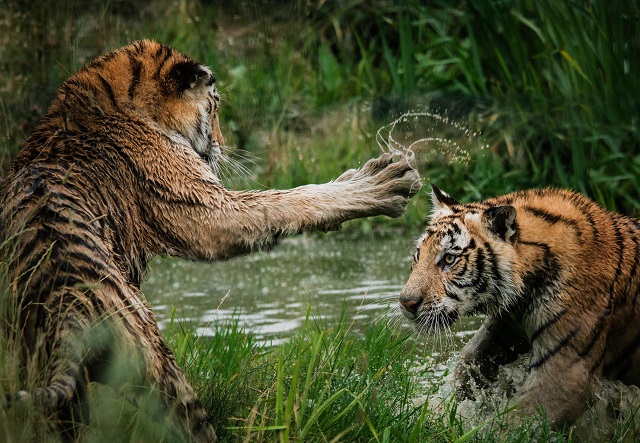 If consensus exists around anything today in American society, it is that we are afflicted by “division.” This general sense of heightened divisiveness is confirmed by numerous Pew Research studies done between 1994 and 2014. Given the current levels of toxicity, it would be easy to set aside this text in favor of a less controversial one. But the thing we wish to avoid may be the very thing that requires our attention.

On the face of it, Jesus asks a rather puzzling question: “Do you think that I came to bring peace on earth?” At first glance, the answer might be, “Well, yes. Isn’t that what the Gospel is all about? Hasn’t peace always accompanied Jesus’ ministry” (Luke 2:14; 7:50; 8:48). And isn’t peace an important part of the Old Testament’s eschatological hope anyway (see, e.g., Isa 11:1-9; 60-62)? But the truth is, the ministry of Jesus in the Gospel of Luke has never been peaceful.

He stood up to read, and the scroll of the prophet Isaiah was handed to him. Unrolling it, he found the place where it is written:

“The Spirit of the Lord is on me,
because he has anointed me
to proclaim good news to the poor.
He has sent me to proclaim freedom for the prisoners
and recovery of sight for the blind,
to set the oppressed free,
to proclaim the year of the Lord’s favor.”

All well and good, but the story doesn’t end here. After declaring his Isaiah-inspired mission, Jesus offers a sharp-edged retelling of the Elijah-Elisha narratives (Luke 4:24-27). And at that point, the crowd turns on him:

All the people in the synagogue were furious when they heard this. They got up, drove him out of the town, and took him to the brow of the hill on which the town was built, in order to throw him off the cliff. But he walked right through the crowd and went on his way (Luke 12:28-30).

In a story that foreshadows Jesus’ crucifixion (Luke 23), we learn that his bondage-breaking ministry was incendiary from the start. It was always about kicking up dust, stirring up demons, and exposing human beings for what they truly are.

In a similar move, Jesus takes aim at the crowd in Luke 12, calling them “hypocrites” (verse 56). But his use of the term differs from its use in everyday English. The crowd is not hypocritical because its members live a double life — saying one thing and doing another. No, he lashes them with criticism because they can’t properly discern what is right in front of their faces: they can read the weather, but not the season (see Jesus’ complaint against the city of Jerusalem in Luke 19:41-44).

The divisive nature of Christ’s ministry is present elsewhere in Luke-Acts. The events surrounding Jesus’ crucifixion come to mind. In that account, Jesus is both denied (Luke 22:31-34, 54-62) and betrayed (verses 47-53). And at Pentecost, the Spirit’s dramatic outpouring is followed almost immediately by opposition (Acts 4:1-4, 23-31). Jesus’ Sabbath healings, moreover, are also marked by deep division, especially among the religious leaders (Luke 4:1-13, 31, 38; 6:6; 10:18; 13:10, 16; 14:1). The conflictual nature of Jesus’ ministry is finally also seen in his relentless assault on the demonic powers (see, for example, Luke 4:41; 8:26-39; 9:1; 10:17; 11:14-26), which catch people up in various forms of bondage. Jesus’ ministry has the disturbing effect of exposing human beings’ deepest loyalties, and often showing them to be idolatrous, ridiculous, and even demonic.

North American Christians, however, often suffer from a terrible affliction: We hate conflict and despise division. Far from interpreting these things as signs of Christ’s presence, we see division and conflict as crises to be managed, contained, and extinguished. As such, American Christians have developed a well-worn arsenal of avoidance strategies, which we deploy whenever conflict and division emerge. And we call this “peace.”

But in our anxious attempts to conceal and contain conflict, we often succumb to the same hypocrisy on display in Luke 12: we fail to recognize that Jesus’s ministry itself may be responsible for stirring up that conflict, bringing both heat and light to how sin, death, and the devil are at work in our communities. The ministry of the king of peace (Luke 19:37) often hides under the sign of its opposite.

One of the remarkable “gifts” of conflict is that when it reaches a boiling point, the invisible social buffers melt away and one is left staring at a gaping chasm. And echoing off the walls of that chasm are the voices of our wounded communities. It is tempting to run from that moment and to shield one’s eyes from the horror — especially if we helped create it.

But those moments of crisis call us to cling to Christ, thank him for his fire, and acknowledge that he is present, exposing us for what we are, and ultimately offering us the gift of true peace.

As we see elsewhere in Luke, there are times when Jesus offers words of “peace” (Luke 7:50; 8:48). In these texts, it is significant that his peaceful words come in the context of forgiveness, healing, and resurrection. For example, in Luke 7, Jesus’ words of peace are directed to the woman who bathed Jesus’ feet “with her tears and dried them with her hair” (verse 44). This sinner receives a public announcement of forgiveness: “And he said to the woman, ‘Your faith has saved you; go in peace.’” In Luke 8, a woman secretly touches Jesus’ garment in order to obtain healing. Recognizing that power had gone out of him (verse 46), he exposes her, commends her faith, and sends her off with a word of peace (verse 48).

Jesus does have a ministry of peace in Luke, but it is integrally wrapped up with his ministry of fire. The fire of God cuts to the root (Luke 3:9), clearing a way for true peace. Luke 12 helps use more clearly perceive “the things make for peace” (Luke 19:44).