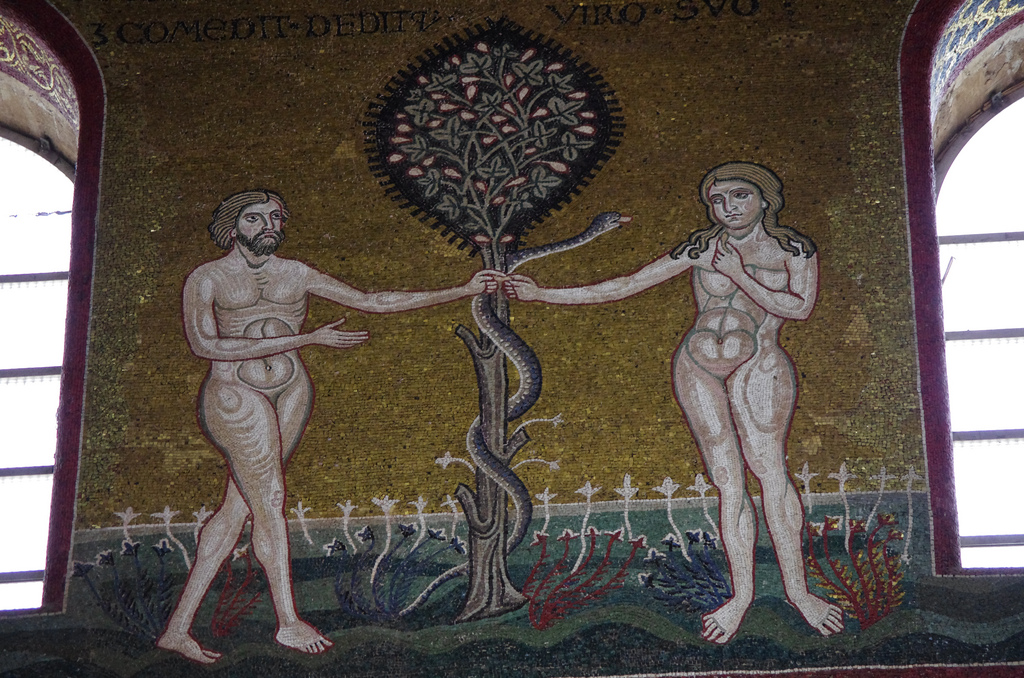 In recent weeks we’ve been working together on helping our people take the biblical stories with them as they leave church, offering these stories as lenses by which to make sense of their lives in God’s world. This week offers an excellent chance to continue down this path. Rarely, in fact, do we encounter passages that tell us so clearly and keenly the truth about ourselves and about how we are to live in the world with both honesty and hope.

The first reading tells the story of “the fall” of Adam and Eve. It is one of the most iconic passages in Scripture, cropping up regularly in paintings, music, literature, film, and television. I’d suggest, however, that as interesting as it may be as a mythic explanation of the origin of sin, it’s even more compelling as a portrayal of what it is to be human. Here are Adam and Eve, living lives of peace and plenty in a garden created by God and given to them to till, tend, and enjoy. Yet even in this paradise they are incomplete, insufficient, and ultimately insecure. It is this insecurity that the serpent plays upon, calling into question the fundamental trustworthiness of God their creator. “God has not told you everything,” the serpent suggests. “Completeness, wholeness, self-sufficiency, mastery — these are within your grasp.” And by naming their incompleteness, the serpent makes it manifest, drawing their attention to their want, their lack, their need like a dentist probes a cavity.

Blaise Pascal, the seventeenth-century French philosopher, spoke of the condition of being human as one, indeed, of having a hole, what he called a “God-shaped hole.” He did not see this as a flaw, however, but rather as the means by which God keeps us tethered to our life-giving relationship with God. Similarly, St. Augustine, the fourth-century African bishop, writes in the first lines of his Confessions that God created a restlessness in our hearts that can only be satisfied when we rest in God. And the seventeenth-century Welsh poet George Herbert went so far as to describe this same restlessness as the “pulley” by which God draws us back to God.

Read in light of these classic theologians, the Genesis narrative indicates that before there is “original sin” there is what I would call “original insecurity.” Adam and Eve, then, are tempted to overcome that original insecurity not through their relationship with God but through the fruit of the tree of the knowledge of good and evil, fruit that in that moment looks to be shaped just like their hole.

Now jump to the Gospel reading. At the heart of the temptation of Jesus rests the same insinuation that God is not trustworthy. “If you are the Son of God,” the tempter begins. This pernicious “if” calls Jesus’ relationship to God into question and suggests that he could and should establish himself on his own terms. Jesus — in this sense truly the “second Adam” as Paul describes — resists the temptation to define himself apart from God and instead is content to know who he is in relation to whose he is.

So a question to ask our hearers — not just to think about, but to take with them, to look for, and to answer in the week to come — is this: what things present themselves as perfectly shaped to fill our own God-shaped hole? What things, that is, are we tempted to look to in hope of eliminating the “original insecurity” that also beats within our breasts?

The PBS documentary series Frontline produced an episode a few years ago called “The Persuaders” that got at a similar question by examining the evolution of modern advertising. In years past, advertisements boasted of the quality of the product. Not too long ago, they would seek celebrity endorsements. Today, however, advertisements make a promise less about the quality of a product and more about an imagined lifestyle that owning the product can somehow provide. By owning this kind of car, or using this kind of wineglass, advertisers suggest, we will discover our identity and move closer to having a meaningful life.

On the face of it, such advertising sounds ludicrous — how can using a particular laptop or television enhance your sense of self-worth? Yet the documentary suggests that we are so starved for a sense of meaning and purpose that we make many of our purchasing decisions based our hope that the story they tell us — that we will feel less alone, less incomplete, and more whole if we simply by their product — is true. We should be clear, it’s not that the stuff itself is bad, but rather that we expect too much from it. As one guest on the program says, “In the end it’s just a laptop or a pair of running shoes. They may be great, but they’re not actually going to fill those needs.”

Which brings us back to the gospel reading. One way to read it is to imagine that Jesus shows us the key to resisting temptation by finding our identity in our relationship with God. And I think there’s something to that. As we remember that in Baptism God confers upon us our essential identity as beloved children, we may be less likely to succumb to the various pressures that seek to tempt us — like Adam and Eve — to define ourselves in terms of what we have.

At the same time, it’s important to recognize that temptation is not once and done. Jesus rejects the tempter here, but he has other moments of doubt, particularly at Gethsemane and the cross. Similarly, our life as Christians does not eliminate doubt, need, or a sense of incompleteness. Rather, we are oriented to our relationships with God and with each as those places where our needs are met, though not taken away. Further, as heirs of Adam and Eve, we will inevitably fall short in claiming our God-given identity. Yet Jesus has triumphed, not only at this moment but also and more importantly at the cross, committing himself and his destiny to God. Therefore, when we fall short we can confess our failings and trust that in and through the crucified and risen Jesus we have the promise of forgiveness and new life.

So I wonder if one way to help our people take both this passage and this promise with them into the world would be to have a time of confession and absolution during or right after the sermon. Perhaps we can be both honest about the temptations we face to define ourselves by what we have (or what we don’t have!) rather than through our relationship with God. Perhaps we can even equip our people with both words of confession (honesty) and words of absolution (hope) to take with them into the world, so that by remembering our baptismal identity we will be better armed to deal with the original insecurity that is part and parcel of being human.

Toward this end, I will put a few possible resources below. For now, know how grateful I am for your ministry and your commitment to root our people in our shared identity in Christ. What you do matters — thank you for your fidelity.

“What else does this craving, and this helplessness, proclaim but that there was once in humanity a true happiness, of which all that now remains is the empty print and trace? This we try in vain to fill with everything around us, seeking in things that are not there the help we cannot find in those that are, though none can help, since this infinite abyss can be filled only with an infinite and immutable object; in other words by God alone.”
Blaise Pascal, Pensee 10.148.

“You have made us for yourself, and our hearts are restless till they find their rest in you.”
St. Augustine, Confessions 1.1.1

When God at first made man,
Having a glass of blessings standing by–
“Let us,” said he, “pour on him all we can;
Let the world’s riches, which dispersed lie,
Contract into a span.”

So strength first made a way,
Then beauty flowed, then wisdom, honor, pleasure:
When almost all was out, God made a stay,
Perceiving that, alone of all his treasure,
Rest in the bottom lay.

“For if I should,” said he,
“Bestow this jewel also on my creature,
He would adore my gifts instead of me,
And rest in nature, not the God of nature:
So both should losers be.

“Yet let him keep the rest,
But keep them with repining restlessness;
Let him be rich and weary, that at least,
If goodness lead him not, yet weariness
May toss him to my breast.
George Herbert, 1633

A Brief Order of Confession & Absolution

Congregation: God in whom alone we find rest, we confess that we often turn from the gifts of identity, purpose, and meaning that you would give us.
Instead of serving others, we serve ourselves.
Instead of being motivated by love, we are motivated by fear.
Instead of seeking wisdom, we seek possessions.
Instead of working for peace, we work for security.
Instead of seeking our good in you, we look to so many other places, trading your abundant and enduring love for the shiny things of this world.
Draw us back to you, O God, and remind us that all that we have and need we find in relationship with you and with each other. This we pray in the name of Jesus, who came as one of us, tempted as we are, yet without forsaking trust in you.

Presider: In the name of Jesus, who suffered temptation and prevailed, who was crucified on the cross and raised on the third day, hear the word of the Gospel: you are a beloved child of God, forgiven, redeemed, renewed, and called to lives of wholeness and life. Therefore depart this place in peace to serve your neighbor in love.

All: Thanks be to God. Amen.