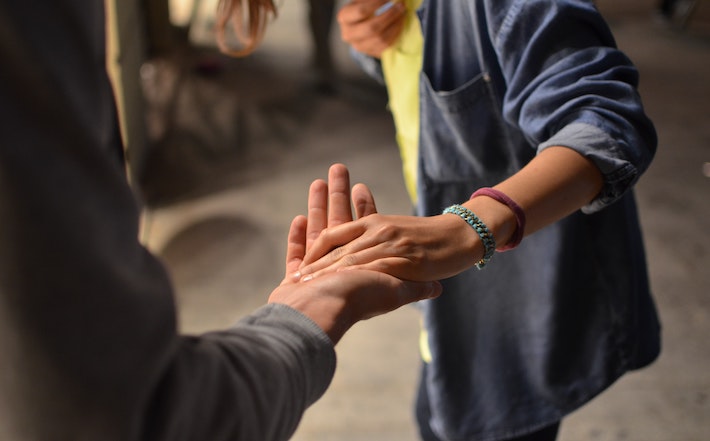 Photo by Rémi Walle on Unsplash; licensed under CC0.

I don’t know about you, but I’ve been feeling grumpy at this beginning of the new year. Partly it’s because my son got Covid (for the second time, and despite being fully vaccinated) and had to miss several days of school. But it’s also because I have been absorbed the last few days by news articles and images commemorating and analyzing the January 6, 2021, insurrection at the Capitol in Washington, D.C. That event a year ago was a day of violence and hate, fueled by lies from the former president and from conservative media figures who were more interested in ratings than in truth.

For a short time after that terrible event, it seemed that such a violent shock to the system would finally wake people from the fever dream of extreme partisanship that had consumed the previous four years. But now, a year later, the divisions are just as deep, and Republicans and Democrats seem to live in two different realities, reinforced by social media echo chambers and cable news programs that feed a 24-hour outrage cycle.

It’s enough to make anyone feel grumpy, and exhausted.

Unfortunately, those same divisions are present in the American church. An article I read a few months ago spoke of the increasing equation of the word “evangelical” with “Republican.”1 The word “evangelical” in American culture has become less and less associated with personal commitment to Jesus Christ and more associated with political and social conservatism, and the result is too often judgmental, unbiblical, and mean-spirited attitudes and actions. (What is hard to understand about Leviticus 19:34: “You shall love the foreigner as yourself, for you were foreigners in the land of Egypt”?)

On the other hand, many mainline Protestant churches seem unable to offer a compelling Gospel message that speaks to the losses and longings of the modern age. Such churches, while earnestly trying to enact social justice, unthinkingly embrace the social mores of the wider popular culture without any serious biblical or theological reflection on them. The result is too often legalistic and moralistic preaching about various social ills, moral relativism about individual sin, and an insipid theology that doesn’t seem to believe that God still acts in the world.

And on both sides, people who self-identify as Christians are careful to distinguish themselves from the “other” kind of Christian. Christians of all stripes would rather associate with those who agree with them politically and socially than with those who claim the same Lord and Savior.

“For the common good”—it is a phrase that is too often lacking today in our political and social discourse. The pandemic is still raging in large part because some people think that their personal “freedoms” are more important than the common good. Exhausted medical workers are once again dealing with full ICUs because there are too many people who refuse to get vaccinated; again, citing their “freedom” to do whatever they like.

Personal “freedom,” in this understanding, is utterly opposed to the common good. By contrast, Martin Luther, in “Freedom of a Christian,” offers another description of freedom by making two assertions that seem to contradict one another:

Luther roots these insights in a later verse from 1 Corinthians: “For though I am free with respect to all, I have made myself a slave to all” (9:19). He also cites Romans 13:8: “Owe nothing to anyone except to love one another.”

Luther says of this latter verse, “But ‘love’ by its very nature is dutiful and serves the one who is loved. The same was true of Christ who, although Lord of all, was nevertheless ‘born of a woman, born under the  law.’”3

Free in Christ, forgiven of our sins, we are not bound to any particular political or social ideology. But we arebound to our neighbor in Christian love and service, following the example of Jesus.

And what is that example? Well, we can look to Gospel stories like the one for this week, where Jesus provides wine for a wedding feast—wine of the finest vintage, abundant and overflowing.

We can look to the testimony of the psalmist, who extols God for God’s covenant love: “Your steadfast love, O Lord, extends to the heavens, your faithfulness to the clouds … [All people] feast on the abundance of your house, and you give them drink from the river of your delights” (Psalm 36:5, 8).

The biblical testimony, in other words, is that God is a God of generosity, even profligacy. God gives extravagantly out of God’s abundance. Jesus provides copious amounts of fine wine for a wedding feast and then becomes himself the living water, “springing up to eternal life” (John 4: 14). The Holy Spirit pours out gifts on the church, and all for the sake of the common good, for building up the body of Christ.

So, where does that leave us? Well, if we claim to be children of this generous God, and disciples of Jesus Christ, then we cannot give in to cynicism, despair, or grumpiness (at least, not for long). God is still active, the Spirit still gives gifts to the church, and calls us to use them for the common good.

Divisions will persist, both in society and in the church, but we can show a better way. Freed in Christ, we “owe nothing to anyone except to love one another.” Love lived out in generous service to the neighbor—this is the kind of love Paul describes in the very next chapter of 1 Corinthians:

Love is patient; love is kind; love is not envious or boastful or arrogant or rude. It does not insist on its own way; it is not irritable or resentful; it does not rejoice in wrongdoing, but rejoices in the truth. It bears all things, believes all things, hopes all things, endures all things. Love never ends. (1 Corinthians 13:4-8)

God grant us grace to embody such love this year, especially towards those with whom we disagree.

A blessed New Year to you and yours.