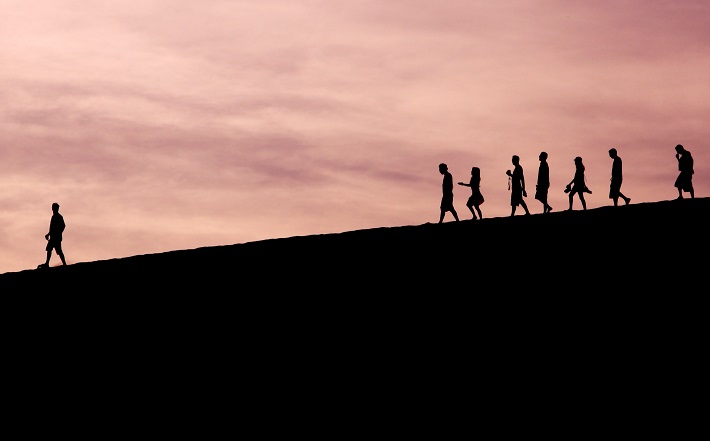 Photo by Jehyun Sung on Unsplash; licensed by CC0.

“By faith Abraham obeyed when he was called to set out for a place that he was to receive as an inheritance; and he set out, not knowing where he was going” (Hebrews 11:8).

There are similarities between Abraham’s call and the call of preachers. Each week, Working Preacher, you respond to God’s call to prayerfully study biblical texts and prepare a sermon intended to not only convey God’s word, but also to draw people into an encounter with the Living God. This is no small task! Like Abraham’s journey to an unknown land, so too does your preaching preparation take you to unexplored corners of biblical texts and perhaps to a sermon you did not expect to preach. And as Abraham knew there was no going back once he set out, so too do you know that once the words leave your mouth, you cannot take them back or control how they will be received.

The preaching vocation, therefore, is a journey of faith that can be both exciting and daunting.

This week’s texts explore the nature of faith in the God who called Abraham and continues to call people through Jesus Christ. But preaching faith can be challenging, especially because hearers have different experiences and understandings of it. Oversimplified expositions of biblical texts can distort faith, including by presenting it as:

Each of these portraits of faith finds at least a grain of support in the Bible. For instance, Hebrews 11 does present Abraham as exemplary of a faith that believes and receives the impossible, including the child that God promised to him and Sarah in their advanced age. And Luke’s Gospel indicates that Jesus does heal people and that his disciples are to petition God for what they need.

But whenever snapshots of faith focus too sharply on outcomes or on human capacity to believe, they obscure what faith is all about: a living, loving relationship with the God who is perfectly faithful. This God takes the initiative to call broken and flawed people into relationship with the One who created the universe by the divine word and resurrects the dead to eternal life. This God promises people an eternal kingdom where God’s justice and peace will reign—a kingdom that human effort cannot ultimately construct.

Faith, at its core, is about who God is and what God does. Yes, Abraham “believed the LORD; and the LORD reckoned it to him as righteousness” (Genesis 15:6). And yes, Abraham concretely responded to God’s promise by hitting the road. Human action reflects trust in God, but it is not the primary source of such faith. Instead, faith begins with God’s self-revelation that calls us into covenant relationship with the Creator, Redeemer, and Sustainer of all that exists. And it grows as we walk daily with this God, who is always faithful to fulfill God’s promises.

So, I encourage you to see preaching on the life of faith/discipleship of Christ as fundamentally an opportunity to point people to the character of the God we are called to follow. This is the God most fully revealed in Jesus Christ who is pleased to bestow the kingdom as a gift (Luke 12:32).

Focusing on God does not mean that preaching should ignore that God’s graciousness elicits an appropriate human response, as seen in this week’s texts. Indeed, much harm can come from preaching faith or radical discipleship of Christ as apathy to the realities of this world that do not reflect God’s reign, such as climate change contributing to dangerously high temperatures and famines that are exacerbated by the war against Ukraine. Jesus himself is clear that preparation for the promised land involves selling one’s possessions to give to those in need (Luke 12:32-40). Faith in God yields good fruit. But people cannot trust and sacrificially serve someone they do not know.

It is my hope that your preaching will draw people into a fresh encounter with our loving, gracious God and remind them that the life of faith is not just for the perceived biblical A-listers. Along with Noah, Abraham, and Moses, Hebrews 11 includes less-celebrated exemplars of faith such as Rahab (Hebrews 11:31) and the women who “received their dead by resurrection” (verse 35; see also 1 Kings 17:17-24; 2 Kings 4:18-37).

Although faith does not provide an escape from this life, it does mean holding loosely to everything in this world so that one’s trust is ultimately in God. I have met some of the most inspiring contemporary exemplars of faith in immigrant congregations in the United States. As when Abraham lived like a foreigner (Hebrews 11:9), so too do many of these Christians display a deep trust in God and God’s promises because the temporal sense of security provided by citizenship and being accepted by others often alludes them. In your preaching, you might highlight such “ordinary” people of faith who did not necessarily have as dramatic of encounters with God as did the biblical “greats,” but who are no less inspirational.

Ultimately, faith is not a formula for prosperity or a roadmap to navigate the end times. Rather, it is living in dynamic relationship with the faithful God who guides us one step at a time, in our particular circumstances.

Take comfort in this reality, Working Preacher. To preach is a bold act of faith. You might not see right now exactly where your sermon will go or how people will respond, but know that God is guiding you. Trust that the God who created the world by God’s word will also work to evoke faith through your words, as imperfect as they may be. As Jesus exhorts us to anticipate his return at an unknown time (Luke 12:39-40), expect God to show up in surprising ways through your preaching. Because God is faithful.