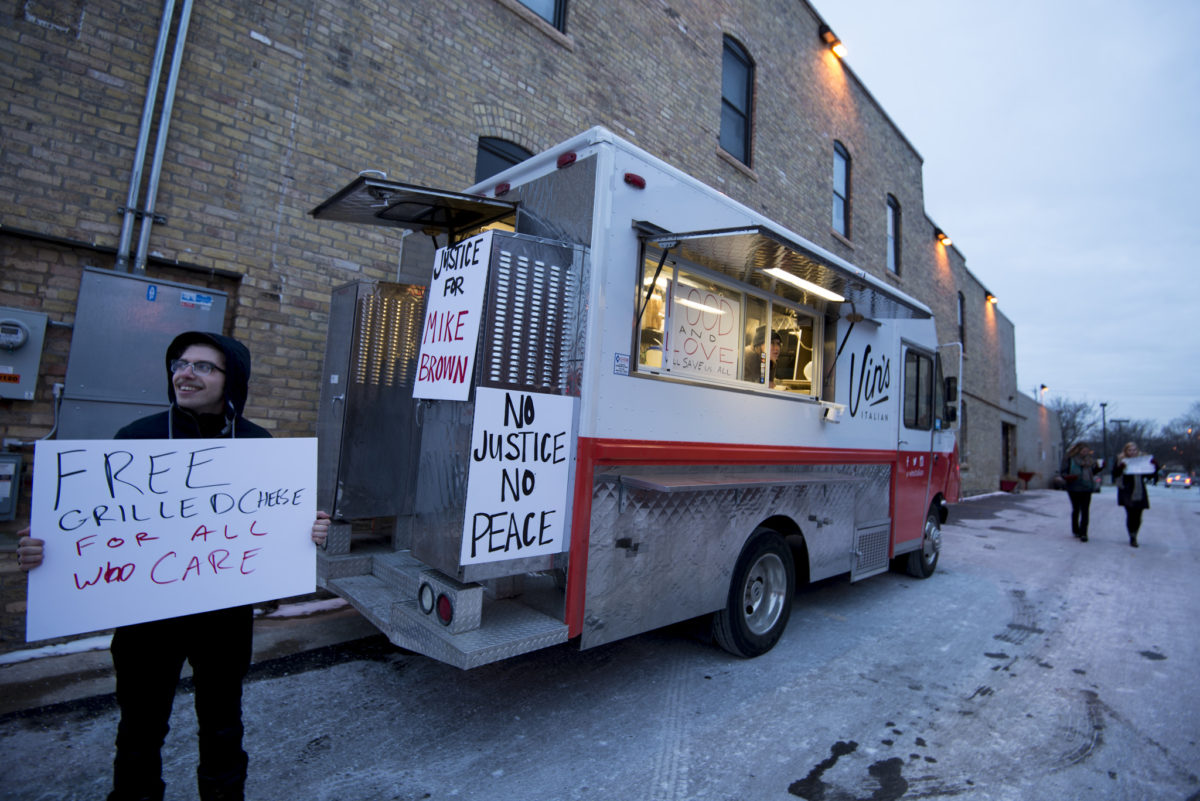 "Free food at at the rally and march for Michael Brown." Image by Fibonacci Blue via Flickr; licensed under CC BY 2.0.

I know what you’re thinking, Dear Working Preachers. Five weeks of John 6. The bane of a preacher’s existence. Wishing you had taken a vacation, hired a supply preacher, assigned the intern to preach. After all, what’s really new?

But maybe, we don’t need anything new — and to what extent that can be part of the church’s problem, part of the preacher’s problem — enticed into thinking that the only way the Gospel will survive, will matter, will be relevant, is coming up with something novel to say. But more often than not, all we really need is a simple, yet clear reminder. And in this case, a reminder that when Jesus says he’s the bread of life, he means it.

Most of you already know that chapter 6 represents John’s narrative pattern of sign, dialogue, discourse – Jesus performs sign, which is followed by conversation where people debate the meaning of the sign, after which Jesus offers a discourse on or an interpretation of the sign (see also John 5, John 9-10:21). Why the dialogue and the discourse? Because we have significant potential to misinterpret Jesus’ miracles. So it’s a good thing we have four more weeks to figure this one out.

The first thing to remember for this first Sunday, the “Sign Sunday,” is that this sign just might mean more than it appears to at first blush. That for some reason, for several reasons, even, we need 5 weeks, we need 71 verses to abide (get it?) in Jesus as the bread of life. Jesus is asking us to remain there for a while, to consider for quite some time, what difference it makes that he can feed 5,000 people. Jesus’ invitation itself should change our perspective for the next five Sundays.

So, we start with the feeding itself and there are two details on which the whole event hinges – there’s a lot of green grass and Jesus himself feeds the 5,000 folks.

So what’s up with the grass? Fast forward to John 10, where Jesus is the Good Shepherd, providing pasture, abundant life, for his sheep. Fast forward one more time to John 21, where Jesus will tell Peter he needs to be the Good Shepherd after Jesus ascends to the Father. In other words, before we start over-metaphorizing, over-symbolizing, and over-ecclesializing the feeding of the 5,000 as the Eucharist, the Lord’s Supper, Holy Communion (whatever your denomination calls it), let’s take it at face value – Jesus feeds the hungry. Jesus tends his sheep. And discipleship means we are called to do the same.

Jesus feeds the 5,000, unlike Matthew, Mark, and Luke where the disciples distribute the food. Yes, discipleship means we are called to do the same, but first Jesus embodies himself what it looks like. Jesus feeds the 5,000. Jesus goes to the blind man, finds him, and brings him into the fold, so that he can go in and out and have abundant life. Jesus serves up breakfast on the shore of the Sea of Galilee. Only when we experience Jesus’ feeding of us can we begin to imagine living out Jesus’ words to Peter, “tend my lambs.”

And, if you are tempted to sacramentalize this story as, “on the night in which he was betrayed,” another important, yet rather obvious reminder — the two times Jesus hosts a meal in John are connected with his life and his resurrection, not his death. Yes, Jesus and the disciples share a meal before his arrest, but there is no indication Jesus is the host of that meal, nor do we hear the words we regularly associate with communion. Instead, Jesus provides sustenance, nourishment, pasture — and abundantly so — all connected to his life. John 6, in the middle of his ministry and John 21, his resurrected life, where his invitation to “come and eat” follows the disciples’ recognition of him only when there is an abundant catch of fish.

So, what does this mean? At least, on this first of five Sundays in John 6? I think it means that being fed, literally, is a hallmark of the presence of God. That where people are fed, literally, is where you can expect to experience grace — see it, taste it, smell it, feel it.

This past week, I was blessed to be one of the presenters at the Young Clergy Women International Annual Conference. The other presenter was the Rev. Dr. Tracy Blackmon. If you do not know who she is, you must. Her ministry in the aftermath of the killing of Michael Brown in Ferguson, Missouri, is what embodying the Gospel looks like — period.

She shared with the 100+ clergy women there her “most holy” of Holy Communions — when she was fed by Cathy “Mama Cat” Daniels. Mama Cat has been serving Sunday meals to demonstrators outside the Ferguson Police Department’s headquarters nearly every week since Michael Brown was shot by Officer Darren Wilson on Aug. 9, 2014.

In Mama Cat’s words, “These [sic] our mothers, and fathers, and brothers, and sisters, and nieces and nephews. It’s our people, so when we say black lives matter we need to know that we need to include every last one. I can’t sleep at night knowing people is laying out in the cold. I spent the night out here two days before Christmas because you got to understand what they going through. You know? That’s what motivates me to keep on going,” she said.

I suspect Jesus shared similar sentiments. He saw a great crowd. He asked, “where will the bread come from?” but knew what he had to do, and invited the people to sit down.

Sometimes, Dear Working Preachers, it really is as simple as that.

P.S. If you haven’t already seen the Working Preacher video featuring Michael Curry talking about the Bread of Life series, take a few minutes to watch. “How is it that God is trying to feed the world, not on fast food, but on gourmet [food] that gives life?”