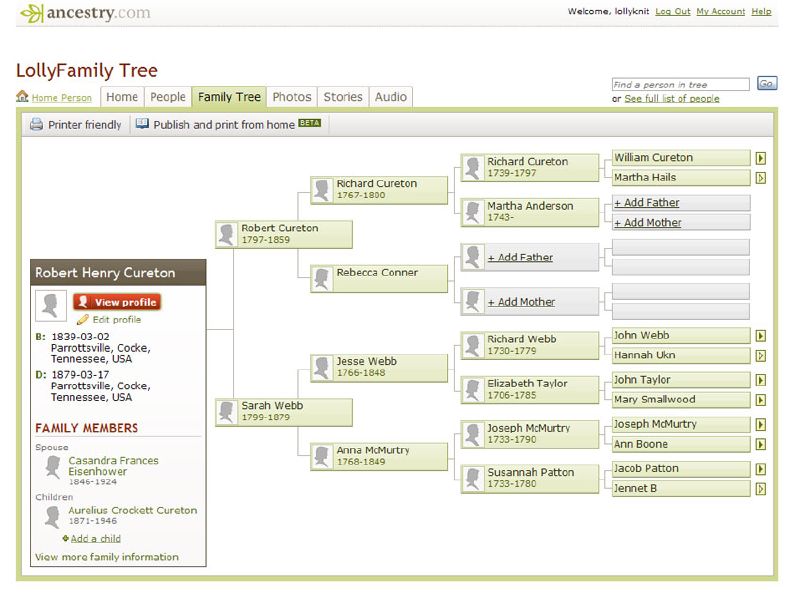 “Connect to a deeper family story,” urges the website Ancestry.com. For a price, the service will connect you to the stories of your ancestors, telling you where they came from and when.

It is an attractive proposition. In this age when so many of us have moved away from where we grew up, there is something compelling about the promise of finding our roots. Because finding our roots may help us to discover our identity, who we are now.

Though I have not enlisted the services of Ancestry.com, I had a similar experience last fall of delving into family history. I was visiting my mother in Missouri to help her host a visit from her six cousins, children of her two aunts who had left Missouri in the 1930’s to seek their fortune in California. Those two sisters married two brothers and had six girls between them, and they are delightful women.

Before the cousins arrived, I found in my mother’s closet a box with photos and letters–letters between my grandpa and his two sisters, letters from their parents in the 1920’s, and letters between my grandpa and grandma when they were courting. We had a wonderful time sitting around the table reading out loud from these letters. The voices of our parents, grandparents, and great-grandparents came alive again in all their warmth and humor.

There was one letter that I found especially moving. It was from my grandpa Urban right after he proposed to my grandma Esther in 1938. He was writing to her brother, the pastor of a small church in rural Minnesota, to tell him the news of the engagement. Grandpa wrote in his elegant handwriting: “Your dearly beloved sister has graciously consented to cast her earthly lot with one not deserving of such honor.” How lovely.

This experience of delving into my family’s history comes to my mind when I read John 4, as that story about the meeting between Jesus and the Samaritan woman is in many ways about identity, about knowing and being known.

The Samaritan woman is astonished that a Jewish rabbi would speak to her and more astonished that he knows her personal history: “You are right to say, ‘I have no husband.’ For you have had five husbands, and he whom you now have is not your husband.”

Now, without adding to the many bad interpretations about this woman, it is clear that having five husbands is not a badge of honor even in our day, and certainly not in first century Palestine. Whether through death or divorce, the woman has been unlucky in love. And now, here she is faced with a stranger who knows the intimate details of her life. It is an uncomfortable situation. So she goes on the offensive, and jumps immediately into the safer realm of theological debate: On what mountain should God be worshiped? This dialogue, in turn, leads to the topic of the Messiah, and then, in a striking moment, Jesus reveals who he is:

“I am” he says. Ego eimi. An echo of the burning bush, of course. I am the Messiah. Surrounded as he has been by his disciples and sought out in the previous chapter by Nicodemus, Jesus reveals himself first not to them, but to this outsider, this Samaritan woman. It is an extraordinary moment.

By telling the woman who she is, Jesus shows her who he is. By confirming her true identity, he reveals his own, and that is how it still happens. The Messiah is the one in whose presence you know who you really are–the good and bad of it, the all of it, the hope in it.1

And we all have those parts, of course. The letters from my grandparents and great-grandparents, for instance, speak honestly about the depression that my grandpa struggled with off and on throughout his life. They also reveal some very hard times. There is a letter from 1928 from my grandpa, off at school in Indiana. He writes to his mother, “Please don’t become afraid, Mama.” His father, in his early fifties, was in the hospital with cancer. He died soon after, at the very beginning of the Great Depression, and my grandpa had to drop out of seminary in order to care for his mother and two sisters.

Or there is the letter from my great-aunt (also named Esther) several decades later, as her own husband Herbert was diagnosed with terminal cancer. She writes from California back to my grandparents in Missouri: “We are saddened by this news, of course. But we are so very grateful to God for all the many blessings we have in our lives. The girls are a bastion of strength for us, and we know that Christ is with us and will give us all that we need for the days ahead.”

Jesus speaks to the woman at the well about “living water”: “Those who drink of the water that I will give them will never be thirsty. The water that I will give will become in them a spring of water gushing up to eternal life.” The witness of the saints that have gone before us–the Samaritan woman as well as the saints we knew and loved in this life–demonstrates how that living water works.

The identity of those saints, their true and deepest identity, was not something that could be found on a printout from Ancestry.com. Their deepest identity was found in the living waters of baptism. Grafted into the family tree of Christ, they were named beloved children of God. And that’s the identity that sustained them throughout their lives.

Because here’s the thing: The living water that is Christ’s life in us, that living water is not just for the joyful times; it is also and especially for the hard times and the hard places in our lives, the times when we are dealing with depression or bitter disappointment or grief or guilt. Philip Yancey puts it this way: “Grace, like water, flows downward… No matter how low we sink, grace flows to that lowest part.”2

That’s what happens to the Samaritan woman. She is unexpectedly known and loved by this itinerant Jewish rabbi, and the living water that he offers becomes in her a spring of water that overflows into her own life and even into the lives of her neighbors. “Come and see!” she says to them. She is an evangelist, one of the first: Come and see!

As you preach this week, ask your parishioners: Where is the low point in your life right now? Where is the place where you are stuck in grief or guilt or anger or pain? Invite them to come and dip their hands into the baptismal font (or pool), marking themselves with the sign of the cross. Invite them to remember their true and deepest identity, that they are named and claimed as beloved children of God in the living waters of baptism. And invite them to let those living waters flow to that lowest point, to heal and renew and bring them back up to life again.

Thank you, dear preacher, for being an evangelist, for inviting others to come and see, to come and taste the living water. May it become in you, too, a spring of water gushing up to eternal life.