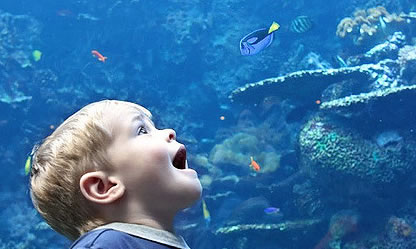 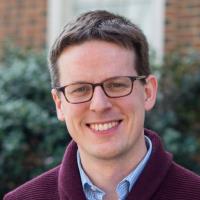 Somewhere between the top shelf of Pixar masterpieces (Wall-E, The Incredibles, a few others, though of course opinions vary) and the dustbin of Pixar less-desirables (Cars and its progeny), history will file Finding Dory, the new sequel to 2003’s Finding Nemo. As cinematic narrative, it’s not transcendent. But what it lacks in artistic creativity it makes up for with attention to a surprisingly theological theme, which is the role of disability in the shape of our personal and community stories.

In the original film, a young clownfish named Nemo gets abducted from the ocean for display in a waiting room aquarium, and his risk-averse father Marlin sets out on an unlikely journey to bring him home. Along the way, he meets Dory, a blue tang fish who suffers from short-term memory loss; every few moments, Dory seems to restart from scratch. She’s funny, charming, and endlessly energetic; though, without the ability to hold a character motive in her head, she doesn’t come off as a figure capable of advancing her own story.

But of course, with this summer’s sequel, Pixar has set themselves precisely that challenge: construct a story in which the central character lacks the capacity to drive what we might consider a classical narrative. She can’t always remember where she’s going, or why. Some things do stay with her: she flashes upon this memory of her parents, and sets out to find them, and that motivation never disappears. Other memories, however, vanish: at times we find her literally going in circles.

In some ways, it’s disappointing that Dory’s capacity seems to adjust itself depending on the contextual needs of the narrative. On the other hand, what Finding Dory does remarkably well is to find ways of advancing the story without fundamentally healing her disability. Dory changes, to be sure: she finds confidence, she makes new friends. But especially for a film that largely takes place in and around a marine hospital (motto: “Rescue, Rehabilitation, Release”), Finding Dory refuses to paper over the hardest truths about memory loss and disability: sometimes brains and bodies don’t work, and we can’t always fix them.

It can be hard for churches to hear this message. Even congregations that don’t trace their roots to old faith healing traditions nonetheless very often revive that theology in less conspicuous ways. Sitting at the bedside of a parishioner with Alzheimer’s or dementia, most pastors have heard questions like, “Why did she deserve this?,” almost as if to say, “If only she had been more faithful, God would never have let her memories go.” How seductive it is to think that any of us are so fully in control of our own fates!

What Finding Dory provides, then, is a bit of helpful complexity. Dory’s not the only fish in the hospital, and their stories cover the spectrum. Bailey, a beluga whale, recovers his broken sense of echolocation through hard work and faithful determination — a classic movie moment, and the story we so readily want to tell. But Bailey’s story is the exception to the rule: whether we’re talking about memory loss, disability, or even mental health issues like anxiety and depression, the central work of Finding Dory is to remind us of the limitations of the Gospel of Believing In Yourself and Trying Really Hard.

In its place, Finding Dory substitutes a gospel of community. The most prominent new character in the film is Hank the surly octopus, who gradually softens over time into a close friend and companion. At one level, Hank serves a very basic practical function: sometimes the fish need to get from one container of water to another, and the octopus is the only way they can travel. But in that sense Hank begins to stand in for the entire community of Dory’s friends: they can shepherd her through the gaps in her narrative without robbing her of her central role and importance. In Dory, at least, a broken body can absolutely be at the center of its own story, as long as it takes place in community.

In this way, Dory’s friends remind me of church — or at least of the church for which I hope. In Dementia: Living in the Memories of God, John Swinton writes about the church’s responsibility to re-narrate its corporate story through its attention to those with memory loss: “A church that remembers well and is attentive to the needs of people with advanced dementia is a church that is remaining faithful.” Surely this is generally true for all who gather around the table with broken bodies: surely the church can be a place where each story is held sacred, and lifted up, and we can all be a little bit broken, together.