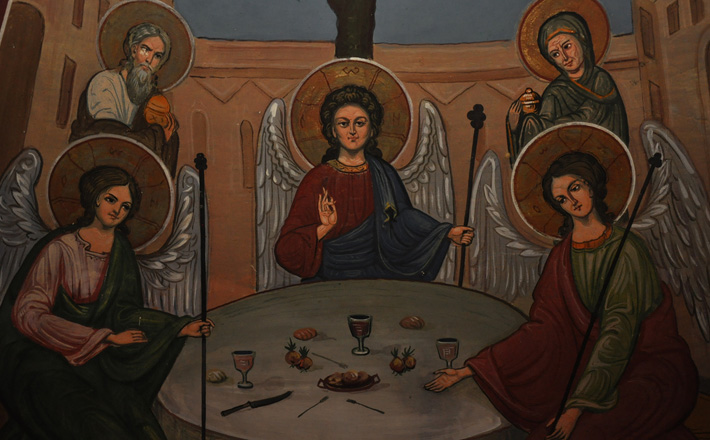 Year A opts for Genesis 1, and Year C for Proverbs 8. Genesis 1 and Isaiah 6 evidently owe their slot to traditional exegetes’ understanding of the plural divine language in both passages. Isaiah 6:3’s “holy, holy, holy” also helped commend it, as the hymn by that name shows: “Holy, holy, holy … God in three person, blessed trinity.” Proverbs 8 actually portrays a plural Godhead, with Wisdom, a precursor to John’s Logos, coexisting with God before creation. So what can we do with Isaiah 6 — or rather, with a truncated version that stops before the punch line?

The narrative places the prophet in the temple. Though Isaiah says, “I saw the Lord,” his description only reveals the edge of God’s enormous robe, as if he had quickly averted his eyes. The seraph’s hymn juxtaposes divine transcendence and immanence in a single chorus, setting God apart from all creation as thrice holy, yet nevertheless seeing divine glory in creation’s fullness. As they voice praise, God’s descent to meet the people at Mount Sinai is echoed through the smoke and shaking (Exodus 19:18). The theophany in the day’s lectionary psalm, Psalm 29, resembles Isaiah’s vision, especially in verse 9: “The voice of the LORD causes the oaks to whirl, and strips the forest bare; and in his temple all say, ‘Glory!’’’

Like the Israelites witnessing God at Mount Sinai, the prophet fears for his life. But whereas they retreated, insisting that Moses mediate for them, Isaiah continues standing in God’s presence. Some scholars associate his concern about “unclean lips” with Akkadian texts depicting mouth purification rituals, in which the mouth symbolizes the entire body. Isaiah suggests that he is not ritually prepared to stand in God’s presence, nor are his people prepared to stand trial in the holy tribunal. A seraph touches his mouth with a hot coal and pronounces his guilt “departed” and his sin “atoned.” Though Isaiah has expressed concern for his community too, this atonement applies only to him. Yet atonement so easily obtained suggests a God ready to forgive others just as quickly.

It is only after Isaiah is purified that he hears God’s voice. It is not clear whether God is speaking only to the heavenly attendants or to the prophet as well, nor whether Isaiah is meant to participate in the discussion. In the prophet Micaiah’s story of the heavenly council in 1 Kings 22, Micaiah had stood in God’s court as a spectator only, witnessing one of the heavenly host offering to carry out God’s mission. On the basis of this precedent and that of the conversation between God and the Satan in Job 1-2, it’s reasonable to think God expected a heavenly, not human, response.

What happens next contrasts intriguingly with other key moments of divine-human encounter. Abraham (Genesis 22:1, 11), Jacob (Genesis 46:2), Moses (Exodus 3:4), and Samuel (1 Samuel 3:4-6) all responded “Here I am” to God’s calling them explicitly and repeatedly by name. Isaiah is not called in this story, but rather volunteers. In only one other place in Scripture does someone answer “Here I am” to a call that has not been extended, and that was God:

I was ready to be sought out by those who did not ask,

to be found by those who did not seek me.

This verse from close to the end of Isaiah communicates pathos in God’s fervor to be found by a nation that still rebels after centuries of drama and suffering. Similarly, Isaiah’s response to a call that has not been issued suggests eagerness to bring a message to people with whom he identifies. Unlike Moses with his myriad excuses, Isaiah is hardly able to contain his excitement, waving his hand like a student raring to speak up in class. He is Scripture’s only figure to cry out: “Here I am! Send me!” In a very few strokes the story paints a prophet who, despite discouragement, remains eager to mediate between God and his community.

If we read beyond verse 8, we find that the message Isaiah is given could scarcely be more incompatible with prophetic sensibilities. Isaiah is told to tell his neighbors, who so far have played deaf to him, to neither see nor hear. He might have taken ironic comfort in realizing that those not listening would not hear this terrible word either. Still, the directive is strangely out of step with everything else the prophet has understood God to say.

In fact, the message is logically impossible since, in order to obey its imperative, “Do not understand,” one must first understand. A prophet who repeated such a paradoxical message enough times would certainly stop listeners’ ears and shut their eyes, and if not dim their wits, at least administer a severe headache. But Isaiah’s preaching tends toward punchy irony. So here, the prophet depicts himself as privy to a noncommunicative message, a command to make his hearers do exactly what they are already doing. Had Isaiah taken this message at face value, we would have record of his going and saying little else besides a terse, Jonah-like “Keep listening, but do not comprehend.” But instead, in the very next chapter, Isaiah gives King Ahaz a message of reassurance, and practically pleads for the king’s response.

The prophetic message Isaiah conveys through describing his vision in the temple is not “Keep listening, but do not comprehend,” but rather, “I saw the Lord, and he told me to tell you, ‘Keep listening but do not comprehend.’” Such spilling of divine secrets amounts to a paradoxical intervention, when straightforward communication has failed, an intervention designed to goad listeners into hearing.

Within the temple, all say “Glory!” God’s voice shakes the foundations and causes plain members of the natural world to whirl. What about us humans — what does it take to shake us into response?

From one perspective, it may seem that the poet who composed Psalm 29 was an ancient version of what we might today call a storm-chaser.