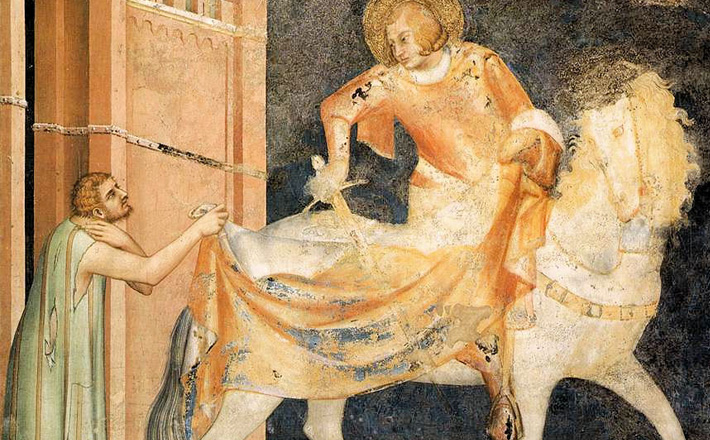 Simone Martini. St. Martin and the Beggar, from the Church of St. Francis of Assisi, Italy. Creative Commons image by jimforest on Flickr. Sourced from Art in the Christian Tradition, a project of the Vanderbilt Divinity Library, Nashville, Tenn. Original source.
February 23, 2014

An alphabetic acrostic poem (cf. Psalm 9–10), the psalm is composed of twenty-two stanzas, one for each letter of the Hebrew alphabet. In each eight-verse stanza, all the lines begin with the same Hebrew letter. Through this complex literary form, the psalm celebrates the righteousness of God as graciously revealed in the law. Indeed, the poetic structure of Psalm 119 presents an orderly exposition of “order” itself — God’s law.

In the lectionary for this Sunday (verses 33-40), all eight verses begin with the letter heh, the fifth letter of the Hebrew alphabet. And the first word in each verse is a usually a verb (verses 33-39).

Students of Hebrew will know that there is something unique about verbs that begin with heh.These heh-verbs verbs convey a sense of causality and are thus called “causatives.” One could, for example, have a regular old verb that means “to know.” However, if one were to add a heh to the beginning of that verb, the verb would now mean “to cause to know” or “to inform.” Consider the verb “to march.” If one adds a heh to the beginning of that verb, “to march” becomes “to cause to march” or “to lead.”

In fact, this is the word that begins verse 35: “Lead me in the path of your commandments for I delight in it.” The psalmist is praying here that God will “cause him to march” along the paths that God has established, and the psalmist further suggests that the psalmist delights in this marching!

The psalmist begins each line of the stanza with a plea that God would cause the psalmist to do something. The series of seven petitions (verses 33-39) leave no doubt as to who is the agent, the one who causes the actions to happen. With all of these heh-verbs the psalmist proclaims unambiguously that God does the work.

The psalmist knows that only God can cause such things to happen and eagerly asks God to do just that. The psalmist may indeed march along the right paths (verse 35), but God leads the psalmist’s procession. Taking all of these pleas together, we realize that the psalmist is, in effect, asking God to orient the psalmist to God’s word and to the righteousness that God’s word proclaims.

Verses 33-35 begin with verbs that petition for God to guide and illumine the psalmist. In response to God’s guidance, the second half of each of these verses expresses the psalmist’s deep desire to follow where God leads.

The next part of the stanza, verses 36-39, conveys a sharp contrast. God’s law, which is the picture of order and right relationships, is contrasted to that which is false and fleeting. To follow God’s law means that one must choose between what is true and what is false, that which is fleeting and that which is constant and abiding. God alone enables the psalmist to choose the right path. The psalmist is incapable of discerning without God’s guidance, so the psalmist invokes God’s wisdom to illuminate the way.

In Hebrew, the last verse of the stanza (verse 40) is the only one that does not begin with a verb. “Behold, I have longed for your precepts, in your righteousness give me life.” By breaking this pattern, the psalmist brings the stanza to a climax and conveys a fundamental posture of reliance on God, which the psalmist has been describing throughout prayer.

The prayer for illumination, like the psalm, asserts that it is God who graciously opens our hearts and minds to God. We do not enlighten ourselves. Ultimately, we do not illuminate the Scripture through our own talents or intellect.

The numerous heh-verbs in Psalm 119:33-40 conveyed unambiguously that God is the primary actor, the ultimate cause. God causesour eyes to turn, causes us to learn, causes us to have life. We may desire to know God, but only God makes God’s self known. The psalm and the prayer for illumination speak the same message as with one voice. God alone illumines. God alone can open our hearts and minds.

The Sermon on the Mount is Jesus’ first discourse in Matthew’s Gospel.

The Old Testament Reading comes from the book of Leviticus this week.

Discussion Questions for Epiphany 7A