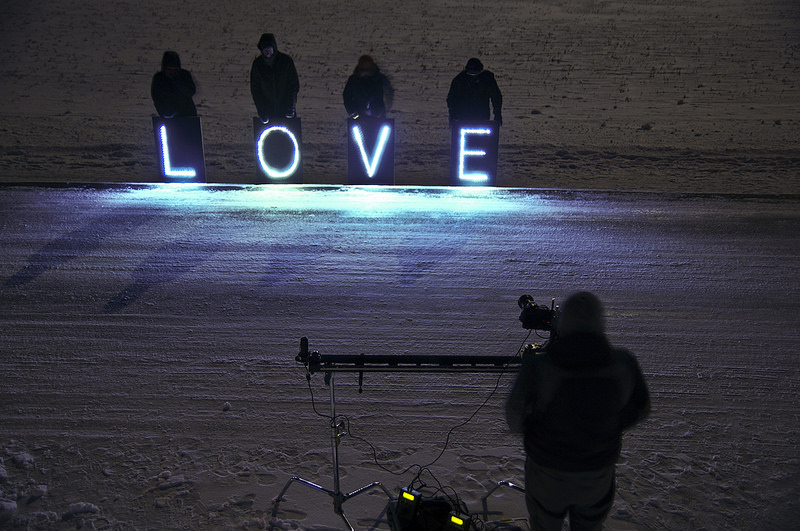 I think a lot of us probably have one of two reactions to this passage and the (in)famous commands it contains. The first is simple, and a little sad: we’ve heard Jesus’ commands so often that they hardly register. “Turn the other cheek.” Yeah — yawn — sure. “Love you enemies.” Sounds nice — why not? And out of our trained indifference we rarely think deeply about actually trying to follow them.

The second response takes Jesus’ words more seriously, but also assumes they’re somewhat out of reach. “Turn the other cheek.” Are you kidding?! And get treated like a doormat? “Love you enemies.” You can’t be serious! Both commands — and a host of Jesus’ other injunctions to boot, seem from this point of view to be sheer folly, idealistic sentiments that would be crazy to apply in the “real” world.

But here’s the thing: Jesus isn’t kidding and is dead serious about these commands. In this sermon, Jesus is outlining his vision of God’s kingdom and issuing a summons to those who desire to be a part of it. Which is why we need to take them seriously. Of course, if such sentiments seem a little crazy to us, we’re not alone. Critics from the extreme right and left have often characterized Jesus’ teaching as ludicrous. Consider Ayn Rand, political philosopher, literary bestseller, and recent darling of the Tea Party, who wrote, “If any civilization is to survive, it is the morality of altruism that men have to reject.” And then there’s Karl Marx, father of communism, who said, “The social principles of Christianity preach cowardice, self-contempt, abasement, submissiveness and humbleness.”

Before dismissing these critiques too quickly, however, we should perhaps point out that, indeed, turning the other cheek and returning hatred with love is no way to get ahead in this world. For the rules of this kingdom are well known — it’s a dog-eat-dog world where only the strong survive. But that’s just the point. Jesus isn’t trying to modify the rules of the world. He’s not, contrary to prosperity preachers, inviting you to figure out how to make the most of this world or have your best life now. And he’s not even inviting you to find a safe port amid the storms of this world. Rather, he’s starting a revolution by calling the rules of this world into question and, at the very same time, redeeming this world that he loves and that will, in due time, put him to death.

Jesus calls the powers of the day into question by describing an entirely different way to relate to each other, inviting us into relationships governed not by power but by vulnerability grounded in love. “’An eye for an eye’ makes all people blind,” Gandhi would similarly say almost two thousand years later. Here Jesus invites us to overcome the urge to retribution with loving submission and forbearance.

Yet he isn’t satisfied with merely overturning this world. For the very essence of his critique — that we were created not merely for justice but also for love and life — is simultaneously the only possible hope for those enmeshed in the orders of the world. Strength eventually fails. Power corrupts. And survival of the fittest leaves so many bodies on the ground. Love alone transforms, redeems, and creates new life. As Martin Luther King, Jr., a student of both Jesus and Gandhi, once said, “Darkness cannot drive out darkness: only light can do that. Hate cannot drive out hate: only love can do that.”

So if we are inclined to read over these familiar words too quickly in our haste to get on with the familiar story, or if we want to dismiss these commands out of hand as pious idealisms, I’d urge us instead to slow down and take them more seriously. For in these few crazy sentiments Jesus lays before us the plans for the kingdom he proclaims and the revolution he starts. And so before joining either, we should probably know just what it is we’re getting ourselves in for!

As we do so, however, allow one more observation. The last line of this passage — “Be perfect, therefore, as your heavenly Father is perfect” — helps to reframe the whole of this passage. For while telos, the Greek word Jesus employs, can indeed be translated “perfect,” it typically denotes something not so much morally perfect as it does something that has grown up, matured, and now reached its perfect end. That is, telos is the goal or desired outcome of a thing. A fruit tree’s telos, we might say, is to grow mature and tall so that it can bear fruit.

So might Jesus be not simply commanding something of us but also commending something in us? That is, perhaps Jesus simply knows that we have more to give, that we can be and do more than we have settled for, and that we can absolutely make a difference in the world if we simply believe in ourselves. And so I hear in these commands also the invitation to be those people God has created us to be so that we might not just persevere through this challenging life but actually to flourish, making a difference to those around us by sharing the abundant life Jesus has given us. Crazy? Maybe. But Jesus is not only dead serious about what he promises but actually will die — and rise again! — to show us that it’s true.

Three years ago, Working Preacher, I shared several possibilities for how we might bring this message more tangibly to life, and you’ll see in the comments that a number of folks used those ideas to good effect (and added some of their own, to boot!). This time around, I’d simply invite you to share Jesus’ confidence that the persons present in the worship service over which you presides represent God’s family on earth, those with the God-given potential to change the world, live by Jesus’ radical ethics now, and model a new and different way of being in the world that we simply call the kingdom of God.

Blessings on your ministry and life, Working Preacher. Your words, too, make such a difference and I am grateful for them … and for you.

PS: A quick reminder that in my daily devotions on my blog, “…In the Meantime,” I am following Matthew’s story of Jesus, and I’d ask you to consider letting your folks know of this resource.