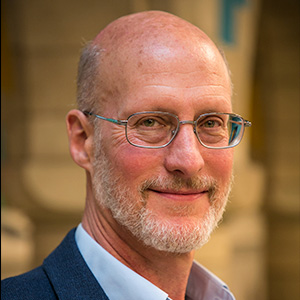 In 2 Thessalonians 2:1-2 Paul (let us call the author Paul, since that is what he calls himself) seems to refer back to a discussion that appears in 1 Thessalonians 4:13-18 concerning the return of Christ, when he will gather believers to himself. If one reads verse 2 as a reflection of the life of the Thessalonian church, then it seems to reflect a deeper, more existential concern than 1 Thessalonians 4. There the issues concern the order of events when Christ returns. In 2 Thessalonians the community seems to need reassurance and comfort that Christ’s return has not yet happened.

Paul, Silvanus, and Timothy go to great lengths to reassure the Thessalonians, urging them not to be “shaken in mind” or “alarmed.” They even seem to suggest that someone else may have sent a letter claiming to come from them. This might account for the emphasis in 3:17 on Paul’s signature. The message is quite clear: The Lord has not yet returned.

This strong assertion, however, still leaves us readers with a host of unanswered questions: “Why might the Thessalonians have thought that the Lord had returned?” “Are there specific events that might have led to this view?” “Who might have claimed this?” “Someone inside the church? Other missionaries?” As much as we readers might want answers to these questions, there is little in the text to help us.

This rebellion led by the man of lawlessness is directed at countering the supreme lordship of Christ. This person sets himself up as superior to all other deities, even taking a seat in the Temple in Jerusalem in verse 4 (a Temple destroyed in 70 CE and still not rebuilt). (Perhaps this is the abomination of desolation referred to in Mark 13:14.) The rebellion is founded on delusions, falsehood, and deceptions (2:9-11). Even extending the lectionary reading to take the entirety of this paragraph, we learn little of the precise nature and character of this rebellion and even less about the concrete identity of the man of lawlessness. This is clearly a battle between the truth of the gospel and its opponents who deal in falsehoods and misinformation. The power behind the man of lawlessness is Satan (2:9) and Christ will ultimately defeat this rebellion (2:8). The rebellion seems completely parasitic. It has no strong assertions of its own, it defends no clear truth, there is nothing it aspires to other than resistance to God.

For Paul to assert that this rebellion and the revelation of the man of lawlessness must precede the return of Christ seems to offer little by way of a timeline for the Lord’s return. There is no sense of how long the rebellion will last. It even seems unclear when it begins (it seems to already be underway in some limited and restrained ways based on 2:7). Moreover, the history of the church and its engagements with the world throws up a multitude of possible candidates for “man of lawlessness,” people opposed to God who use lies, deceptions, and misinformation to deceive the people of God from following the truth.

It is essential that believers bring their questions to the text of Scripture. In cases such as this text, however, it may be worth asking whether a text so resistant to our questions may in fact be inviting us to stop asking those questions and be content with the answers this text provides: The day of the Lord has yet to appear (we have no idea about how soon it may come). Now, as ever, believers must be attentive to the claims of leaders who may either directly or indirectly seek to usurp the Lordship of Christ. There are entities in our world eager to deceive and manipulate the truth of the gospel for unworthy ends. The grace of diligent attentiveness may be all that we can ask or hope for as we patiently await the coming of the Lord.

As chapter 2 comes to an end, Paul does begin to outline both his own confidence in the congregation and his hope and expectation that regardless of when the day of the Lord may occur, the Thessalonian congregation will remain as a faithful witness to the gospel.

As in last week’s reading from 1 Thessalonians, Paul speaks about his obligation to thank God for the Thessalonians. They are beloved: they are the “first fruits” of those who are saved (this image of first fruits indicates that the Thessalonians were one of the early congregations to respond to the gospel); they are sanctified by the Holy Spirit and by their faith in the truth (2:13).  his addition of the sanctifying capacity of the truth stands in contrast to those mentioned in verse 12 who are condemned because they do not believe in the truth. This recitation of God’s work in the Thessalonian congregations serves to remind them that however long they may need to wait until the day of the Lord, God has given them the resources they will need to remain faithful, obtaining the glory of Christ (2:14). These resources will allow them to stand firm and “hold on to the traditions they were taught” (2:15).

In many respects 2:16-17 sound as if they are the closing benediction for the entire letter. The beginning of 3:1 serves to make a transition to the actual closing of the epistle which concludes with a benediction in 3:16-17. Instead of closing the epistle, 2:16-17 concludes this discussion of the Thessalonians’ future hope and their anxieties about the return of the Lord. It asks the God of comfort to comfort their hearts. This is the ultimate aim of the discussion that begins in 2:1. If the Thessalonians are anxious, shaken and disturbed about the coming of the Lord, Paul’s discussion has been designed to comfort them. This comfort does not come from a precise timeline for the Lord’s appearing, but from the God of comfort who will establish and sustain them in Christ.