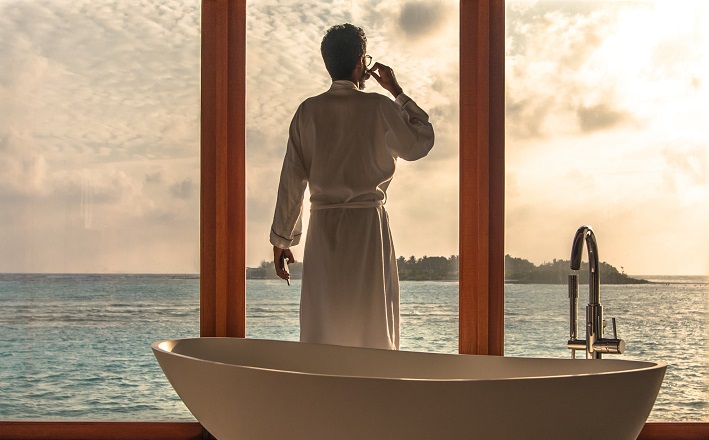 And for good reason—many studies show that in the United States, the rich get richer while wage growth stagnates for middle class families. And the gap between rich and poor continues to grow. Just one striking example: In 1965, CEOs made about 20 times more in income than the average production worker in their companies. In 2016, that gap had risen to 271 times more income.1

The inequality is even greater from a global perspective. In 2018, less than one percent of the world’s population owned 45 percent of the world’s wealth.2 This gap between rich and poor is especially apparent in the developing world. One photographer, Johnny Miller, illustrates the vast divide between the wealthy and the poor by taking aerial photographs of cities, primarily in developing countries. In city after city, luxury homes and golf courses are bordered by protective walls that separate them from squalid slums of corrugated tin or wooden huts.3

Such scenes would not be unfamiliar to the prophet Amos. He passes judgment against the luxurious lives of the wealthy upper class in Israel: “I will tear down the winter house as well as the summer house; and the houses of ivory shall perish, and the great houses shall come to an end, says the LORD” (3:15).

Archaeology has shed some light on the setting that Amos describes. Excavations at Samaria (the capital of Israel) unearthed a large collection of carved ivories from the 8th century BCE, the time of Amos (cf. the “beds of ivory” in 6:4). Excavations at Tirzah (an earlier capital of Israel) found striking differences between the 10th century BCE and the 8th century. In the earlier time period, the houses of the town were of similar size to each other. By the 8th century BCE, there was a section of large houses, while the majority of the city had smaller, more cramped homes.

If we take Amos as our guide, it seems that while Israel’s upper class enjoyed many luxuries, they did so at the expense of the poor, who were in danger of being sold into slavery if they fell into debt (2:6).

And so, Amos chastises the rich, those who—like the rich man in the parable from Luke—ignore the plight of the poor: “Alas for those who are at ease in Zion, and for those who feel secure on Mount Samaria.” The judgment of God that he pronounces is on the rich people of the northern (Mount Samaria) and southern (Zion) kingdoms alike, those who “lie on beds of ivory, and lounge on their couches, and eat lambs from the flock and calves from the stall; who sing idle songs … but are not grieved over the ruin of Joseph” (6:1, 4-6).

It is not completely clear what Amos means by “the ruin of Joseph.” “Joseph,” of course, is a name for the northern kingdom of Israel. Some scholars date this phrase to later in the 8th century, when Assyria threatened Israel. Given the context of the passage, though, it seems likely that “the ruin of Joseph” refers to the unjust economic conditions about which Amos was concerned, the “reign of violence” under which the majority of Israelites lived as they struggled to survive (6:3).

This economic system was not what biblical law envisioned. The Jubilee legislation in Lev 25, for instance, mandated a system whereby no one could accumulate too much wealth and where every family had land to support themselves. Even if they had to sell their land because of illness or drought, they got it back in the Jubilee year.

But 8th century Israel did not embody that vision of economic justice, and so Amos’s judgment is harsh. Those who enjoy luxuries while ignoring the poor will not only be considered “the notables of the first of the nations” (6:1); they will also be “the first to go into exile” (6:7). It is worth noting that Assyria conquered Israel and took its people, especially its nobility, into exile some 40 years after Amos prophesied.

The prophet’s words are outbursts of violent emotions. His rebuke is harsh and relentless. But if such deep sensitivity to evil is to be called hysterical, what name should be given to the abysmal indifference to evil which the prophet bewails?

They drink wine in bowls,
And anoint themselves with the finest oils,
But they are not grieved over the ruin of Joseph! (Amos 6:6)4

Amos decries complacency. He chastises those who consider such economic inequality just “the way things are,” those who have the time and wealth to be idle while people around them struggle to make ends meet.

God’s judgment in the book of Amos arises out of Israel’s status as God’s chosen people. God wants them to live as those who are chosen, and with that election comes special responsibility:

Hear this word that the LORD has spoken against you, O people of Israel, against the whole family that I brought up out of the land of Egypt: You only have I known of all the families of the earth; therefore I will punish you for all your iniquities (Amos 3:1-2).

A sermon on this text should not shy away from the topic of economic injustice. All of the texts for this week speak in blunt terms about the dangers of wealth. And our current economic system (especially our global system) bears enough resemblance to Amos’s that the words of judgment are fitting.

But the sermon should also note the basis for this judgment. To be God’s people (in either synagogue or church) is to be held to a high standard. We follow a God of justice, a God who has special concern for the poor and the oppressed. Part of our calling as people of God is to live out in our daily lives the character of the God we follow.

For the wealthy among us (and if we are Americans, we are among the world’s wealthy), the judgment Amos pronounces is not only for the sake of our brothers and sisters in need; it is also for our sake, so that we may learn to see clearly and discern rightly even in the midst of distractions that would keep us from following Christ. The judgment is also for our sake, so that we, in the words of our Epistle lesson for today, “may take hold of the life that really is life” (1 Timothy 6:19).

God is concerned about our neighbor. God is also concerned about us, that the wealth with which we are entrusted does not become reason for complacency or spiritual torpor. These words of judgment are intended to lead us to “the life that really is life”—life for ourselves, for our planet, and for our brothers and sisters in need.