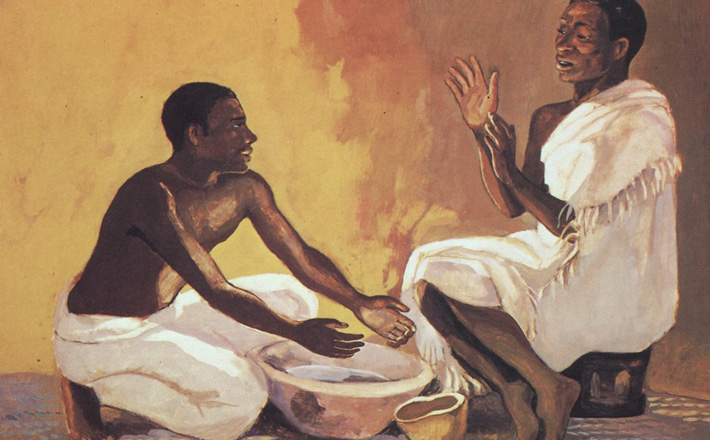 On Maundy Thursday, we commemorate Jesus’ institution of the Eucharist during his last meal with his disciples before his death. As told in the Gospels, this meal took place during the Jewish feast of Passover and right after a disciple had betrayed Jesus to high priests who were plotting to kill him.1 Paul’s comments on this meal provide yet another angle on its significance.

Handing on what we have received

As he repeats in this passage what had been passed on to him from traditions around Jesus, Paul addresses a problem within the Corinthian congregation.2 When they would meet as a congregation, they would have a meal together that combined a community meal with their observance of Jesus’ last supper. It appears, however, that poorer members in the congregation, who probably came later to this meal because of their work, would have to leave these meals hungry because the richer members, who had come earlier, had already eaten most of the food. In light of this, Paul admonishes the Corinthians to examine themselves, warning those who “eat and drink without discerning the body” that they “eat and drink” judgment on themselves (11:29). This reference to “discerning the body” has a double reference—it refers both to the Messiah’s body and to the body of the congregation itself, which is assembled in him (12:12-31).

This double meaning of “body” helps us understand how Paul plays on a double meaning when speaking about transmitting to the Corinthians what he himself has received (11:12). The word he uses for “hand on” (paradidōmi) was also used to depict Judas’ betrayal of Jesus (Mark 14:10) and God’s handing over of Jesus to his death (Romans 4:25). Analogously, Paul says that we are daily “handed over” to death, so that we can “manifest” the life of Jesus throughout whatever is taking place in our lives (2 Corinthians 4:10-11). Indeed, Paul presents his own apostolic ministry— and the Christian life in general—as a sharing in the Messiah’s sufferings and consolations (2 Corinthians 1:3-7). Thus, what we transmit when we “pass on” what we have received is a reality—Jesus’ death and life—that takes place precisely as we ourselves share in his distinctive mode of death and life, as Paul says, “death in me, life for you” (2 Corinthians 4:12).

Sharing the bread and cup

What, then, do we transmit to one another when we celebrate the Eucharist?  Earlier in the letter, Paul speaks of the Lord’s Supper as a “sharing” in the one “bread” of which we partake (Christ’s body), a sustenance that, in turn, makes “many” into “one body” (10:17). As Martin Luther observed, such communion and sharing in a common life—that is, our common life with Christ and with one another—leads us to the practices not only of forgiving and consoling one another, but also of sharing in our wealth and poverty with one another.3

What do we drink when we drink from the same “cup”? In Scripture, “cup” signifies not only a vessel for drinking but also one’s death and ultimate destiny, whether good or bad. For example, in a conversation predicting his suffering and death, Jesus asks his disciples—who are competing for privileged status in the coming age—whether they are able to drink his “cup” of suffering and be baptized with the same baptism (in other words, destiny) to which he has been baptized.4

“Cup” is further defined in this passage as the cup of the “new covenant,” a theme Paul develops in Second Corinthians where he speaks about how the “Spirit of the living God” will write the law on “fleshy hearts” and not on “tablets of stone.”5 This idea of the new covenant, which Luke also speaks of in his account of the Lord’s Supper, is drawn from Jeremiah’s portrayal of the new covenant the Lord will make with the people of Israel—when the law will be found within them, written on their hearts, and God will be their God, and they will be God’s people. On that day, all people will indeed, “know the Lord”—from the least to the greatest—because God will be merciful on their unrighteousness and remember their sin no more (Jeremiah 31:34).

Proclaiming the Lord’s death until he comes

Lastly, what does Paul mean when he concludes by saying that whenever we eat this bread and drink the cup, we “proclaim the Lord’s death until he comes” (11:26)? With this concluding reference to the Lord’s death, Paul spotlights the eschatological character of the Eucharist—that it is an anticipation of the future the Messiah’s death and resurrection ushers in, a future that is yet come but which we can anticipate even now through the “pledge” of the Spirit within and among us (2 Corinthians 1:22, 5:5).

Paradoxically, it is through death that we anticipate this future in our lives in the present. Such anticipation takes place when we die to or no longer live out of the dysfunctional patterns that keep us hooked, as individuals and communities, within cycles of sin and injustice, and the destruction they bring about in our lives.

Thus, what the Eucharist symbolizes and enacts is that wherever there is death, sin, and injustice, the Messiah Jesus, crucified and raised from the dead, is creating new life and righteousness within and among us. When we eat and drink at this Lord’s Supper, what we enact within the present is a future that recreates the past we have inherited or created—a future, as signified by biblical visions of an eschatological banquet, that brings us into harmony with one another and the social and natural worlds to which we belong.