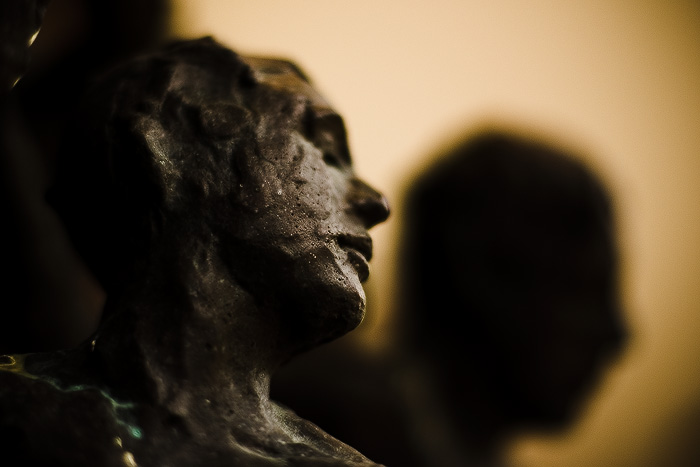 In between, readers witness Jesus’ trial, Peter’s denial, Jesus’ last words from the cross, and finally his death and burial. At one point in the narrative, the narrator switches back and forth between two scenes in the trial: one outside, in the courtyard where the crowd interrogates Peter; the other on the inside, with Pilate interrogating Jesus.

This gives the viewer “double insight” into the development of the story — a double insight that would be consistent with John’s hope that we would believe and believe again. But believing may also mean getting close to the possibility of unbelief.

The story begins with one screen: Jesus, his prayer still hanging in the air, and his disciples go “across the Kidron valley to a place where there was a garden, which he and his disciples entered” (John 18:1). At this point, John supplies a dramatic climax to the prologue: “The light shines in the darkness, and the darkness did not overcome it” (John 1:5).

Perhaps ironically, the narrator of John introduces the creaturely lights of human power (lanterns, torches, and weapons) alongside the uncreated light of God in Christ. If Nicodemus came to Jesus under cover of night, with what he knew (“we know that you are a teacher,” John 3:2), now, we see other “lights” coming for Jesus.

Under cover of a different night, religious authorities assemble “a detachment of soldiers together with police” — they bring lanterns, torches, and weapons — or light as a weapon. Think police flash lights and how they might be used to disorient a suspect — shone into the eyes, the suspect often shields himself or herself, turns but doesn’t know where to turn.

Only this time, these weapons bounce harmlessly off Jesus who is the light of the world. Thus, according to John, he knew all of what was going to happen and he, not they, comes forward with the question: “Whom are you looking for?” (John 18:4).

A stunning reversal! We expect shouts and commands from the police, but instead the captive interrogates his captors.

Not incidentally, this image of excessive police force, commands to comply, is a far too familiar one. If one wanted to explore how this text “interrogates” the militarization of the police force, it would not be out of line — the text invites this kind of analogy.

Readers will recall a similar question in other contexts, including the call of the disciples: “What are you looking for?” (John 1:38). The disciples looked for Jesus and, in some ways, recognized him, desired to stay with him. By contrast, the police and religious authorities come “looking for Jesus” but they cannot see him, despite their lights and their weapons, and perhaps precisely because of them.

Twice Jesus asks, “Whom are you looking for?” And they answer two times, “Jesus of Nazareth” (verses 5a, 7b). Jesus’ self-description, simply “I Am” (no “he” in the Greek) throws out a shockwave of unrecognition — “they stepped back and fell to the ground” (verse 6b). Still staggering with shock and disorientation, Jesus asks them again, “Whom are you looking for?” (verse 7b).

Noteworthy, too, is Simon Peter’s reaction — he lashes out, using a sword not unlike those who came to arrest Jesus. Jesus’ exhibits a power wholly unlike the world of Roman and religious elites.

Verses 12-14 supply a transitional text, almost like a screen that goes black with a written account of what happened after the lights went dim — you might even call this a brief intermission before resuming the story.

Now the screen splits into two pictures, one showing Peter “outside at the gate” (verses 15-18) and the other showing Jesus in the courtyard of the high priest (verses 19-24).

How does this split screen arrangement change our engagement with the text? On the one hand, it gives the reader an insight into the narrative. The reader enjoys an advantage over Peter and the other disciples. But it also creates a closeness to both conditions — Jesus’ trial as well as Peter’s denial.

John’s account of believing includes our proximity to denial. But what is denial? Is it only what Peter says, in response to being questioned, or is it that and something else as well? Beyond the denial itself, Simon Peter seeks invisibility — he warms himself by a coal fire, along with others, guarding his identity. Dietrich Bonhoeffer writes that “any community of Jesus which wants to be invisible is no longer a community that follows him.”1

How many of us struggle with this, wanting to hide our faces in the anonymity of our “coal fires”? An all too common image of all of us is the downturned face reflecting the light of a screen. It seems like a metaphor or a symbol for Peter’s particular version of invisibility. Even so, even Peter cannot escape detection — some of that light must cling to him, even amid his denials!

With Peter’s third denial, the story moves to the trial before Pilate. The question, which Jesus raised before, “Whom are you looking for?” returns, only this time it is on the lips of Pilate: “Are you king of the Jews?” (33b).

It seems like a bit of cat and mouse, but the truth is that John deals in double meanings. Pilate unintentionally confesses Jesus as king — he does not understand Christ’s kingdom but, like Caiaphas, he inadvertently testifies to the saving purpose and power of Jesus, whose kingdom is in this world but not of this world. Pilate asks, “What is truth” and yet, the whole time, he has been speaking to the one who says, “I am the way, and the truth, and the life” (John 14:6) — he talks to him, he is his “captive” — but he does not see him!

Who is this king? For whom are we looking as a church? As people of faith? As a society? Do we need to look with new eyes, with a different heart upon this one we know and yet do not know? We will see more completely the kind of kingship Christ brings in the crucifixion.