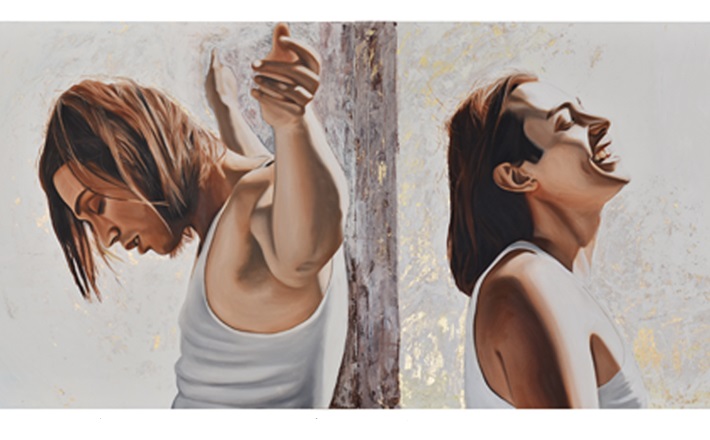 Here I will divide the passage into three sections: 18:1–27; 18:28–19:16a; and 19:16b–42. Throughout these scenes, Jesus’ steadfastness is contrasted with a number of other characters, who flicker in and out of focus, often compelled by fear. Jesus, however, remains determined to fulfill his Father’s will and shouts victoriously from the cross, “It has been finished!” (19:30, my translation) As the story unfolds, we hear Jesus’ earlier words ringing in our ears: “I am the noble shepherd who lays down his life for the sheep … No one takes it from me, but I lay it down myself. I have authority to lay it down and I have authority to take it again. This is the commandment I received from my Father” (10:11, 18, my translation). In 18:1–19:42, we watch our Noble Shepherd in action.

When the narrative resumes in 18:1, we find Jesus with his disciples in the Kidron Valley, the same valley to which King David escaped when his son, Absalom, attempted his coup (2 Samuel 15–17). Unlike David, Jesus knows betrayal is coming; he has known Judas was a “devil” at least since John 6:70. Rather than fighting, Jesus surrenders to the cohort of armed Roman soldiers—a “cohort” was made up of 600 men! But he does not do so without first showing his full might. When Jesus responds, “I am he” to the questioning group, the men all fall immediately to the ground before Jesus. According to John’s Gospel, Jesus surrenders not out of weakness, but out of obedience to his Father and for the protection of his own disciples (18:8–9). In contrast, the high priest (who is not present) is unable to protect his own slave, Malchus, who suffers a deforming cut to the ear from Peter (18:10–11).

John 18:12–14 narrates the transition in locations. The fact that a Roman cohort leads Jesus to Annas’ house along with the “soldiers of the Jews” shows us that the Jewish elite are working hand in hand with the Romans they fear. In 18:15–18 and 25–27, Peter denies Jesus three times. After all his boldness in the garden (willing to attack in the presence of 600 Roman soldiers plus more Jewish soldiers!), Peter is suddenly paralyzed in a courtyard. What Peter seems to fear is shame rather than death. Peter was willing to see Jesus die, and to die with him (13:31–36), but only in a way he thought was noble—through combat that he would have instigated! But now, arrested, Jesus will die shamefully without a fight. Peter is not interested in that type of king.

In 18:28, the location shifts again, this time to the governor’s headquarters, the praetorium near the temple grounds. In a well-recognized chiasm, Pilate shuffles in and outside his own abode, looking more like a slave with a message than an all-powerful representative of Rome. Throughout this section, the fear of those surrounding Jesus comes to a head. In 11:45–54, the high priest, Caiaphas, met with the Sanhedrin to discuss what to do about Jesus after his raising of Lazarus. Rather than jealousy, this meeting is motivated by fear: they are afraid that Jesus will become so popular he will mount an uprising against Rome. And Rome, of course, will destroy everything and everyone, including the temple, to reassert their authority. For a Gospel written twenty years after the destruction of the temple, this fear is well-warranted. Pilate too, though, is a person of fear in John 19:8. Pilate’s shuffling shows a willingness to appease the crowd before him; it is not in his best interest to rile up the Jewish people right before Passover either. In the end, both these parties, already complicit in Jesus’ arrest, now join together in their fear, resulting in Jesus’ unjust conviction.

With his conviction complete, Jesus carries his own cross to the hill where he will be “lifted up.” Jesus’ “lifting up” or “exaltation” is double-sided: on the one hand, it is a sorrowful moment of humiliating suffering and death; but viewed from God’s (and Jesus’) perspective, it is an “exaltation” that brings life. As he hangs upon the cross, Jesus does not cry out in anguish. Instead, he watches as soldiers unwittingly fulfill Scripture by gambling for his clothes (19:23–24); he provides for his mother and disciple (19:25–27); and actively fulfills Scripture by requesting a drink (19:28). After his death, the soldiers repeat their ignorance, fulfilling Scripture even as they mutilate Jesus’ corpse.

The turning of all to look at his pierced body in 19:36–37 reminds readers of Jesus’ first extended conversation with Nicodemus. In 3:14–15 Jesus promised Nicodemus, “Just as Moses lifted up the serpent in the wilderness, it is necessary for the Son of Man to be lifted up in the same way, so that everyone who believes in him shall have eternal life” (my translation). Suddenly, Nicodemus appears for the third time in John 19:39, working with Joseph of Arimathea to bury Jesus. Joseph’s bold action to request Jesus’ body from Pilate, and Nicodemus’ joining him with a large amount of costly materials, may indicate the fulfillment of Jesus’ words. Having seen their pierced shepherd, do Joseph and Nicodemus begin to live? Even though this section of the Gospel ends with a burial, it already hints at resurrection.