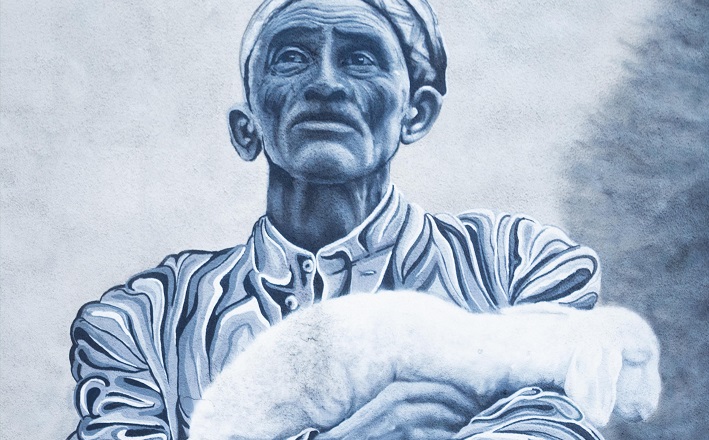 Jesus is walking in the portico of Solomon, an area in the eastern part of the building protected from the inclement weather of the winter, during the feast of the Dedication. The festival was established in 164 BCE to commemorate the rededication of the Second Temple after Antiochus IV had defiled it by building a statue to his own gods on the altar of burnt offering (1 Maccabees 1:54-61). Details of this rededication are found in 1 Maccabees 4:36-59. Today it is called Hanukkah, or the Festival of Lights, because it features the lighting of lamps.

Another thematic pointer is the snatching of the sheep from Jesus and the Father’s hand in verses 28-29 (see 10:12). This makes Jesus one with God, something he will affirm in verse 30, and which will provoke the hostile reaction of verse 31. In 10:12 it is the wolf who snatches the sheep and scatters them, while the hireling flees. In 10:28-29 it is “no one.” What is the identity of the snatcher?

In 10:12, the wolf is obviously the enemy of the flock. He will eventually eat the sheep, as wolves do. The imagery of snatching is very graphic. It conveys the idea of force on the part of the snatcher and weakness on the part of the one holding the sheep. But in this case the sheep are in God and Jesus’ hands and are therefore protected. No one can harm them.

This is a very strong message for the Johannine community, or any community, past or present, experiencing harassment on the part of the larger society, and which include undocumented immigrants, refugees, racial and sexual minorities, women, children, etc. God is stronger than the community’s enemies. We would benefit from never forgetting it, for it will determine our response to the harassment. As Paul said in Romans 8:31, “If God is for us, who is against us?

Eternal life is another theme we find in this passage. It is a concept that appears at least 17 times in John but just a few times in the Synoptics. It is obviously a Johannine concept and it is always related to believing in Jesus. This is summarized in those powerful words many of us learned in Sunday School: “For God so loved the world that he gave his only Son, that whoever believes in him should not perish but have eternal life” (3:16). Now, as we know, eternal life in John has more to do with quality of life in the present than with extension of life in the future. The one who believes “has” eternal life (3:36).

This idea is repeated throughout the gospel, as any concordance will show. The point is: we don’t have to wait to enjoy this kind of life, we can have it right now. This is the unmistakable message of John. And it can be explained in terms of his particular context, one in which the community he belonged to was suspect of holding certain beliefs concerning Jesus that put them at odds with both the Greco-Roman world and the Jewish synagogue. These beliefs were that Jesus was the Messiah, something that contravened the Jewish understanding of Messiahship, and the Son of God, which was a political affront in view of the Romans’ valuation of the emperor as god. To have life eternal being affirmed was a welcoming message for John’s group.

Unfortunately, this message has been over spiritualized. With the promise that what really counts is eternal, heavenly life, people have been deprived of enjoying life on earth fully. Many have accepted this as a God imposed necessity and have suffered incredible hardships with the hope of a future reward.

The example that comes to mind is that of the slaves in the USA, who were told to wait for the “pie in the sky” while they were toiling to provide their white owners with an earthly one, and a very succulent one at that, building through their work the wealth that was to be the foundation of the capitalist system we currently live in. That was a deceiving way of using scripture to enslave, both physically and psychologically, in such a way that even when slavery was abolished, people remained bound to this mentality, and some still are.

In Latin America, land of extreme poverty, the poor and the underprivileged have been told the same thing. That is until Liberation Theology came along with the revolutionary insight that God was on their side, something very obvious when you read scripture, but which was obscured by what we call bourgeois hermeneutics. This revisionist reading of the biblical text brought much needed hope to the lives of the poor as well as concrete ways of being in the world through an emancipatory praxis.

Unfortunately, in the last 20 years or so, a conservative ideology promoting again a literalist and spiritualizing reading of the Bible has resurfaced in Latin America undoing the liberating effects of Liberation Theology and sending us back, spiritually and emotionally, to a view of Christianity that fosters escape from the harshness of reality into heavenly bliss. This ideology is modeled after European and North American conservative theologies, and threatens to snatch the believers out of the hand of the liberating God. May we oppose it with all our strength and follow the one who is our shepherd!