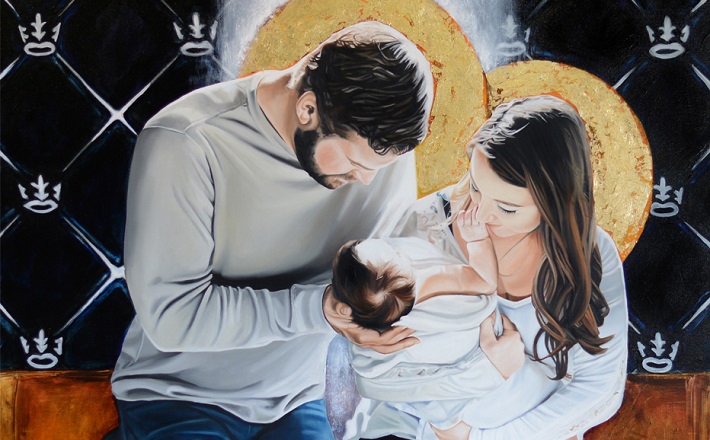 Old and New Testaments alike bear witness to a God characterized by both mercy and justice, both grace and truth (John 1:14). This God we worship is both One and Three, both transcendent and immanent — and this God teaches us that power and victory come through weakness and submission (Philippians 2:5-11), that the last will be first (Mark 10:31), and those who seek greatness should become servants (Matthew 20:25-28).

Reading Psalm 97 at Christmas reminds us of these paradoxes. Today we gather with shepherds around the manger where a young, displaced mother has laid her new baby boy, and we celebrate the fact that “God with us” means we have an intercessor who has experienced all our vulnerabilities, fears, and hurts. Today, we also rejoice with all creation that this powerless infant reigns as God of the universe. On Christmas Day, Psalm 97 gives us an opportunity to place the Nativity in its larger theological context and revel in one of the central paradoxes of our faith.

Psalm 97, an “enthronement” or “Yahweh is king” psalm, is part of the collection of Psalms 93-100 that reflects a major theme in Book IV of the Psalter: no matter what seems to be going wrong in the world, we can have confidence that God reigns over all. Most of the “Yahweh is king” psalms, including Psalm 97, begin with the proclamation “Yahweh is king!” or “Yahweh reigns!” These psalms may have been read each year at the temple as part of a fall festival in which the people would dramatically reenact and celebrate Yahweh’s enthronement.1 The vivid language and imagery certainly lends itself to community performance — whether in the Second Temple period of Israel or in a twenty-first century church.

The “Yahweh is king” psalms highlight different aspects of Yahweh’s reign and its practical implications for our lives. The Psalter largely took shape during a time when Israel held little to no political power. Psalm 97’s prompt to confess that “Yahweh is king” is not the triumphant shout of privileged movers-and-shakers. Instead, it represents a desperate cry of hope for those who look around and see the effects of human injustice and evil intentions. In particular, Psalm 97 encourages those who read it to remember that God is the only true hope we have: the idols and false gods we build up for ourselves — whether in the form of golden calves or political parties or personal accomplishments — are powerless to bring real justice, reconciliation, wholeness, peace, and joy.

Psalm 97 unfolds in three sections. As the psalm unfolds, the psalmist slowly builds up a picture of Yahweh’s character: powerful (verses 3-5) and glorious (verse 6) and exalted (verse 9), but also righteous and just (verses 2, 8) and concerned for the vulnerable (verse 10).

The first stanza (verses 1-6) describes a “theophany,” an appearance of God to humanity — all humanity, as the psalmist emphasizes by saying “the many coastlands” will be glad (verse 1) and “all the peoples behold his glory” (verse 6). The imagery of dark storm clouds, fire, lightning, and earthquakes is standard language for describing times when God appears physically (compare with Exodus 19-20, Deuteronomy 5, and Psalm 18). These are dramatic, terrifying occurrences, and they stand in sharp contrast to the physical appearance of God in Christ. When Yahweh appears in Psalm 97, the whole earth shifts in response; when Jesus appears in Bethlehem, most people remain unaware that something radical has happened.

The second stanza (verses 7-9) spells out what Yahweh’s reign means for worship. Yahweh does not share the throne. Originally written in a polytheistic context, verses 7-9 proclaim that the gods of the nations surrounding (and even dominating!) Israel were nothing compared to Yahweh. At a time when a god’s power was judged by the military and economic status of its worshippers, Psalm 97 makes the bold declaration that no matter how strong a human king might seem, he’s a shameful fool if he bases his strength on “worthless idols” rather than the true God. Ultimately, everyone — even the false gods of Babylon, Persia, Greece, Rome, and the twenty-first century — will bow down before Yahweh, the bringer of justice (verses 6a, 8b).

The final stanza (verses 10-12) describes what implications Yahweh’s reign has for the lives of worshippers. Yahweh brings justice and righteousness to a world characterized by false justice (verses 8b, 10b), so Yahweh’s worshippers should also seek justice and righteousness in the world (verse 10a). This call to “hate evil” and the assurance that Yahweh will “guard” and “rescue” those who do so (verse 10b) acknowledges that the world is not yet at peace, but it also confidently assures us that the same God whose glorious throne is hidden by clouds and fire reaches down to care for “the upright in heart” (verse 11). In Psalm 97, divine judgment merits rejoicing because it means the restoration of justice in the world (verse 12).2

Psalm 97 puts flesh on the bones of the angel’s announcement to the shepherds that the birth of Jesus would be “good news of great joy for all the people” (Luke 2:10). This psalm gives us a picture of who this glorious “God in the highest heaven” really is and how God’s work will bring peace on earth (Luke 2:14). And it confronts us with the paradoxical truth that the mighty God of Psalm 97 is the same God-child “lying in the manger” (Luke 2:16): “Rejoice in the LORD, O you righteous, and give thanks to his holy name!”

The reference to Jesus’ appearance in the flesh, which accords with the feast of Christmas that we celebrate today, is embedded in a series of moral instructions.
Print All Text Print All Commentary