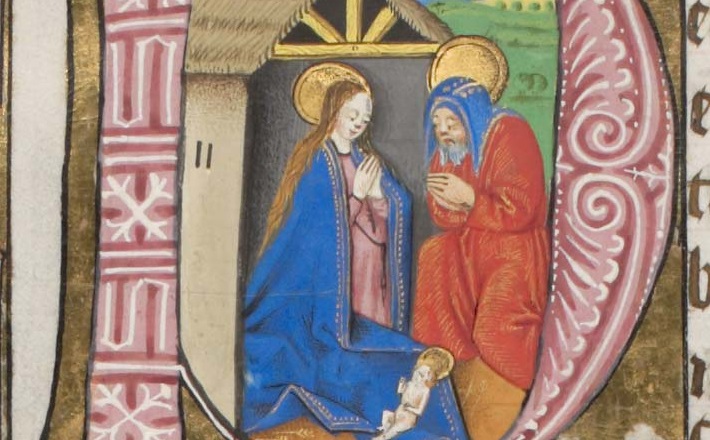 This psalm might even be recited in a few churches (those that utilize all the lections), and perhaps even heard by the handful of the zealous who leave the presents behind to show up for worship.

We have a little cluster of Psalms (93 through 99) whose primary theme is “The Lord reigns! The Lord is King!” Worshippers in ancient Israel must have had considerable hutzpah to travel for miles in caravans over rocky, dangerous terrain to press with the crowd into the temple to shout “The Lord is King!” History seemed not to be on their Lord’s side, as all the vast territories, tax revenues and military victories were concentrated in the hands of the gods of Babylon, or Egypt, or Greece, or Rome, or any of a long parade of the truly high and mighty.

On the first Christmas Day, it was the mighty Caesar Augustus who reigned; the angels didn’t sing loudly enough for the echoes to reach his palace in Rome. The shepherds heard the “heavens proclaiming his righteousness” (97:6) — but they were more startled than moved to deep faith.

The God of the Psalmist and the shepherds (whose ‘name’ was ‘Yahweh’) must have seemed like the weakling on the playground of bigger, more impressive deities (like Marduk or Ea of the mighty Babylonians, or Osiris or Horus of the wealthy Egyptians). All other gods could boast of military triumphs, vast hordes of gold, shinier cultic objects; if success was the measure, the gods of the Assyrians or the Phoenicians or just about anybody else had superior reasons to elicit praise from their subjects. Psalm 97:1 says “Let the earth rejoice” — but I imagine the rest of the earth smirked, chuckled in ridicule, when Israel gathered to sing that Israel’s Lord was King.

Why this foolishness in Israel? Was it lunacy or a profound faith that could stand boldly in the face of being small, puny, a laughingstock, and still affirm that “Our Lord is King! — and yours isn’t”? Did they understand the true nature of the true God? I suspect they did, although it was when Jesus arrived that the world was treated to the ultimate display of exactly what a King looks like.

Jesus lay in a manger instead of a palace. Instead of issuing edicts, Jesus simply let out a cry only his mother could hear. Jesus surrounded himself with poor clueless fishermen instead of slick bureaucrats. Jesus recruited an army of grateful lepers instead of well-drilled regiments. Jesus rode a wobbly donkey instead of a sprightly stallion. Jesus assumed a cross instead of a throne, and a crown of thorns, not gold and jewels.

Laugh out loud when the Wise Men tell King Herod, “We have come to worship the king” (Matthew 2:2) — a rather rude affront to the guy sitting in the palace. Furrow your brow when Pontius Pilate snidely asks Jesus, “Are you a king?” (John 18:37). He commands no regiments, he calls down no heavenly power to defend himself, he says not a single word. In his entourage were not senators and oligarchs, but lepers, prostitutes, the unlettered, the nobodies. At a crossroads he hangs on an olive shaft, a placard of mockery posted above his head in multiple languages so all can chuckle, or scratch their heads in wonder, or perhaps even believe. Let earth receive her king.

Christians who strive for power in America or any other place on earth misconstrue the heart of our faith. We are historically wary of power: when J.R.R. Tolkien told his scintillating stories of the hobbits in The Lord of the Rings, and their quest not to possess the ring of power but to destroy it, he articulated in fable form the essence of Christianity, which is not about us wielding power; we yield to the power of God, which is itself a small, paradoxical power, the power of humble service.

Or perhaps wisdom intuits that with our God, we glimpse a very different, and much better type of royalty. “The word of the cross is folly to the perishing, but to us being saved it is the power of God” (1 Corinthians 1:18). Want to see power? Watch Jesus touch the untouchables, or wash the feet of those who would gladly have washed his. Watch Jesus surrender his very life, so powerful was his love. Watch Jesus forgive the very people who just spat on him and drove nails into his flesh. Watch Jesus breathe his last — and then quite fantastically show up three days later.  “The Lord is King! Let the earth rejoice.”

The world still mockingly laughs — or yawns. But we know, and we pray, and praise the Lord who is king. “Let the earth rejoice”: we pray that they will, and until they do, we rejoice for them, on their behalf, raising a chorus of “Joy to the world; let earth receive her King” on behalf of those who are tone deaf, who have not yet grasped the true nature of power and the wonder of love become flesh.

It is quite fitting to preach on this text on Christmas day.

Most preachers who encounter this text will do so on Christmas morning itself.
Print All Text Print All Commentary