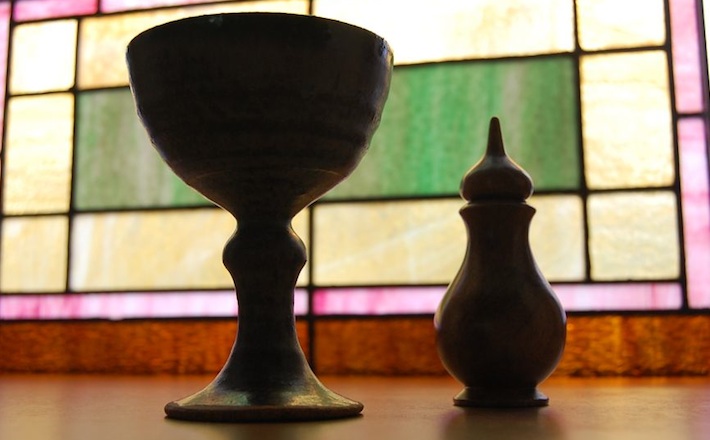 It includes Jesus’ teaching on almsgiving, prayer, and fasting, which became penitential practices especially associated with Lent, as well as a saying about earthly and heavenly treasures. This commentary will focus on 6:1-6, 16-18.

The structure of these verses is clear. Matthew 6:1 can be seen as a general introduction to 6:1-6, 16-18, sounding the main themes in the sections on almsgiving (6:2-4), prayer (6:5-6), and fasting (6:16-18), namely, a warning against demonstrating one’s “righteousness” (dikaiosyne) before others, lest one lose one’s reward with the Father in heaven. Each of the following three sections will warn against showing one’s piety before others, encouraging one to exercise it in secret, so as to receive a reward from God.

Intervening between the first and second sections is further instruction on prayer, including the Lord’s Prayer (Matthew 6:7-15), which is not part of the day’s reading. There is reason for this. The warning against long-winded (rather than ostentatious) prayer in 6:7 and the motivation given for simplicity in prayer in 6:8 diverge from the pattern in 6:1-6, 16-18. Moreover, whereas most of the material in 6:7-15 has parallels in Mark 11:26-27 and Luke 11:2-4, the material in 6:1-6, 16-18 has no synoptic parallels, which suggests a different source. Finally, the practices of almsgiving, prayer, and fasting appear together in earlier Judaism (e.g., Tobit 12:8), which indicates that Jesus is commenting on traditional practices of Jewish piety. All of this together supports taking 6:1-6, 16-18 together as a single thematic unit.

The reference to Tobit is an important reminder that it is all too easy to (mis)read the Sermon on the Mount, including this section, in an anti-Jewish way, as though Jesus is establishing a completely new, “Christian” piety differing from all other kinds of piety, including Jewish piety. In fact, Jesus is commending a kind of piety already found in ancient Judaism. Moreover, although one does not need to doubt that there were Jews in Jesus’ day who exercised such ostentation as Jesus condemns here — pious practices in any religion are vulnerable to excess — even Jesus’ warning against ostentation is actually deeply rooted in Judaism; for we find in ancient Judaism cautions against ostentatious piety similar to what we find here.1

It is important when interpreting these verses to keep the larger context in view, especially the Sermon on the Mount. In 5:20 Jesus admonishes his disciples that, unless their righteousness (dikaiosyne) exceeds that of the scribes and Pharisees, they will never enter the kingdom of heaven. Although Jesus’ teaching should not be seen as a polemic against Jewish piety as such, it is likely that the condemnations of hypocrisy and ostentatious piety in Matthew 6:2, 5, 16 are an implicit reproach of the scribes and Pharisees, since elsewhere in Matthew Jesus reproaches them for the same reasons (cf. 23:5-7, 28), as Matthew 5:20 also suggests. As can be seen from the rest of the Sermon on the Mount, especially Matthes 5:21-48, Jesus’ teaching aims at sincere motivation from the heart. The Pharisees are presented as those who lack such sincerity (cf. Luke 16:15). Jesus’ instruction in Matthew 6:1-6, 16-18 can be seen, then, as an example of the “higher” righteousness that Jesus demands, a purity of heart preceding and informing external demonstrations of piety.

Another verse to keep in view is Matthew 5:16: “Let your light shine before others, so that they may see your good works and give glory to your Father in heaven.” At first this verse may seem precisely contrary to our verses: Does not Jesus say that one should hide one’s righteousness? What unites our verses with Matthew 5:16, however, is the motivation: If one does good works before others, it is to bring glory to God, not to ourselves. Might that also hint towards what the “reward” is for our secret piety — not our own glory, but something else entirely, something to do with God and our relationship to him?

The talk of “rewards” for our piety may be off-putting to us at first. Should one not exercise piety precisely without the expectation of reward (cf. Luke 17:7-10)? Does this talk of rewards for our piety undermine the biblical teaching on grace? Two things should be said. First, one notes that, despite the talk of heavenly rewards in our passage, the emphasis falls primarily on motivation: one should not perform acts of piety in order to win praise from humans. The relationship to God should be primary. Our piety or righteousness should be visible to God and should be so self-effacing and invisible to humans that it is even invisible to ourselves! (Matthew 6:3). Elsewhere in the gospels Jesus teaches a similar self-forgetfulness (Mark 8:35; Matthew 25:37-40). Second, one notes that Jesus does not actually say what the reward for our piety is, and we probably should not speculate about it. It should be said, however, that there is a strong sense in the New Testament that the “reward” for our good works somehow lies inherently in the works themselves (1 Corinthians 3:10-15; 9:16-18; Gal 6:7-8). (As the saying goes, virtue is its own reward.) The more deeply we live in God’s love, the more deeply we live in and towards that which endures forever (1 Corinthians 13:8, 13), and that itself is a reward. If our deepest desire is for God and his love, then there can be no greater reward than to live in God’s love. That is its own reward.

Which leads to the question: Why gives alms? Why pray? Why fast? Why do it all in secret? And what is the reward for these things? Obviously when we give alms we love others. But beyond that, the reason for doing these things can hardly be anything other than that, through repentance and self-denial, they bring us closer to God. According to the gospels, when Jesus prays and fasts — alone, in “secret!” (Matthew 4:1-11; Mark 14:32-42) — his prayer and fasting become channels through which he comes closer to his Father. Prayer and fasting align his will with his Father’s will. They can do the same for us. Fasting (or abstention), not just from food but from any of our desires, reminds us of our complete dependence on God. Fasting and self-denial can also purge us of desires that are not aligned with God’s will. For the God who sees in secret sees even those desires. To be drawn closer to God by being freed from those desires is, again, its own reward.

If my commentary on Psalm 50 for the Festival of the Transfiguration (three days ago) is correct, everything hinges on Nathan’s oracle calling David and us to see ourselves as others see us — indeed, as God sees us.

This week’s epistle reading stands near the end of Paul’s extended defense of his ministry that occupies the first half of an impassioned letter to the Corinthians.
Print All Text Print All Commentary