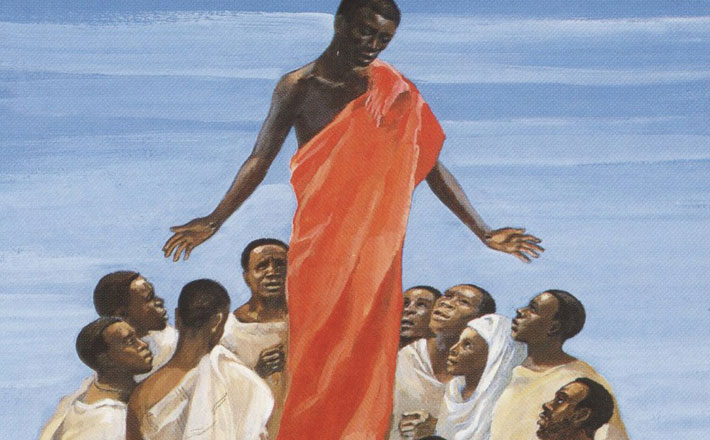 JESUS MAFA. The Ascension, from Art in the Christian Tradition, a project of the Vanderbilt Divinity Library, Nashville, Tenn.
May 5, 2016

Few people would have heard of it if Anna Quindlen hadn’t taken us there in her newspaper column. The center, run by Roman Catholic sisters, welcomed children whose families were homeless, families with no addresses. One day the sisters took the children to the Jersey shore. The 3 and 4 year olds scrambled up the sandy dunes, falling and giggling their way to the top of what must have seemed like mountains to their little legs. When they got to the top, they could hardly believe their eyes: water as far as they could see — more water than they had ever seen. They slid down the dunes and ran to the ocean’s edge. They chased the waves that teased their toes. Then they went off for a picnic in a nearby park. After lunch they begged to go back to the dunes. One little boy named Freddie outran the rest and climbed his way to the top. He looked out, then turned to the others and shouted, “It’s still there!”1

In Freddie’s short life, so much had disappeared — even the ocean could disappear over lunch. We’re older and wise enough to know the ocean is there even when we’re not looking. But we’re not so sure about other things. We may feel a bit like the poet who said: you discover that “ … you live in a different place though you have never moved.” We’re scrambling up the sandy dunes, trying to find a place that will hold.

Jesus’ disciples must have felt the earth slipping beneath their feet at the thought of being left alone. Again. It had been a roller coaster ride of emotions since they followed Jesus into Jerusalem — hope, fear, death, and then the unbelievable presence of Jesus — no longer dead, but alive. But they knew he wouldn’t stay. Indeed, Jesus speaks as though he’s already gone: “These are my words that I spoke to you while I was still with you … ” Isn’t he still with them? His words must have seemed very confusing. Then Jesus opened their minds to understand the scriptures and interpreted the meaning of all that had taken place. He had done the same thing with two disciples on the road to Emmaus. Now Jesus promises even more than scripture: “See, I am sending upon you what my Father promised; so stay in the city until you are clothed with power from on high.”

What did he mean? What was this “power from on high”? Jesus doesn’t say “Holy Spirit” here, but he does in Luke’s second volume, the book of Acts: “But you will receive power when the Holy Spirit comes upon you. And you will be my witnesses in Jerusalem, in Judea and Samaria and to the ends of the earth.” (Acts 1: 8) This is the same Spirit that rested on Jesus at his baptism, the same Spirit that anointed Jesus to preach good news to the poor and freedom for the oppressed. This same “power from on high” would now be given to the disciples and by extension, to us. This is a gift from beyond ourselves — not the same as “team spirit” or conscience or inner peace or anything we create on our own.

But how can we speak of something we have never seen? Could the Spirit be anything we imagine? In John’s gospel Jesus compared the Spirit to the wind — you hear the sound of it, but you don’t know where it comes from or where it goes. Though we cannot see the Spirit, we can see where the Spirit has been. There’s a wonderful woodcut of Jesus’ ascension by Albrecht Durer. If you look closely at the picture — not up in the clouds, but on the ground — you can see footprints on the earth. Durer has carefully outlined Jesus’ footprints down on the level where the disciples are standing with their mouths open. Perhaps the artist was simply imagining a detail that isn’t in the text. Or perhaps, he is asking us, “Why do you stand looking up into heaven?”

Look at Jesus and we will see where the Spirit has been: Jesus’ feet carried him where others wouldn’t go, brought him to tables surrounded by odd companions, gathered children on his lap, and questioned the disparities between the wealthy and the poor.

Theologians haven’t had an easy time talking about the Spirit. They’ve talked far more about God the Father and God the Son. Theologian Elizabeth Johnson says, “Perhaps at the end of their long treatises, they simply got tired.”2 Sometimes, they forgot about the Holy Spirit all together. “This is a shame,” says Johnson, “for what is being neglected is nothing less than the mystery of God’s personal engagement with the world … the mystery of God closer to us than we are to ourselves.”3 This is staying power.

The Spirit is something rather than nothing. Look at the life of Jesus to see where the Spirit has been — leaves moving, then still upon the tree, nailed down. But the story didn’t end there. God breathed into lifeless clay and brought Jesus forth from the tomb. And when the risen Jesus appeared to his disciples, he said: “Stay in the city until you are clothed with power from on high.” From now on, Jesus says, I will be with you in the power of the Spirit. Though I am leaving, you will not be left alone. This is staying power.

The Spirit that anointed Jesus anoints us, still breathes with us and surprises us. Still reshapes the community called the church. If we forget and imagine that we’re in this all by ourselves, if we trust only in our own efforts, I hope we’ll hear a little boy named Freddie calling out to us: “It’s still there!”

2 Elizabeth A. Johnson, She Who Is: The Mystery of God I Feminist Theological Discourse (New York: Crossroad, 1993) 128.

The book of Acts begins by reminding its reader, Theophilus, of an earlier book — the Gospel of Luke (Luke 1:1-4), placing the reader in the midst of an extended story with Jesus at the center.

The earlier preaching studies for this passage gathered here in Working Preacher surely offer us part of the “wisdom and revelation” given by the Spirit (Ephesians 1:17) to help the “eyes of our hearts” be opened more fully to both the immanent and heavenly presence of God in Christ throughout the cosmos.
Print All Text Print All Commentary