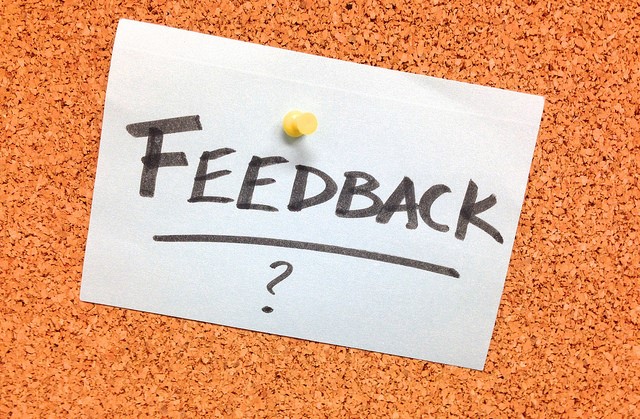 Got Feedback?(Creative Commons Image by Alan Levine on Flickr)

My dad once told me a story about preaching instruction during his time in seminary that would be impossible to imagine happening today. After one student delivered his sermon to the class, the professor pronounced his judgment on it: “That sermon was weaker than a broth brewed from the strained shadow of a starving sparrow.”

Times have changed. When I was in seminary, sermon labs were primarily peer-reviewed and it would be only a slight exaggeration to say, “Never was heard a discouraging word.”

There was a professor in a church history class who tried to revive the caustic spirit of the old professor by assigning the class to write sermons and, after reading them, announcing his shock that no one in the class knew the first thing about writing a sermon. But his critique was merely a complaint about the lack of conformity to his personal theology than about the art of writing a sermon.

As a professional writer, I came into seminary well-acquainted with criticism. The amount, and sometimes the intensity, of give-and-take between writers and editors would astonish most people. When that is resolved and a finished work is produced, writers are then subject to public criticism from reviewers.

Because of this background, I assumed that in peer-review sermon labs honest criticism was actually welcome. I soon discovered this not to be the case. I do not recall anyone but me ever saying anything that could be construed as criticism. Although I’m certain I was far more tactful than the above-cited professor, I got the distinct impression that my observations were not welcome. The etiquette of the situation seemed to proscribe anything but praise.

I bring this up because I have been on a number of call committees, primarily as a lay person, but also as a pastor. In the course of that, I have examined dozens and dozens of mobility papers in which pastors are asked to rate their strengths and weaknesses. I can remember only one pastor who did not rate preaching as one of his greatest strengths. (Interestingly, he turned out to be an above-average preacher.)

Worship attendance trends in recent decades, as well as many discussions with parishioners and former parishioners, would suggest that this elevated opinion of preaching skills is not shared by the laity. I can’t help but wonder if the understandable desire to support and encourage pastoral candidates has created a disconnect between self-perception and reality that is harmful to both pastors and to the church.

In looking back over my career, the most honest and critical feedback I ever received on sermons came from my internship support group. I guess it’s the only time I ever had a group formally in place who took it as their job to help me by critiquing sermons.

They were actually much better at this than my seminary peers. It’s not that they would rip apart my sermons; in fact, on the whole, they were very encouraging. But the encouragement came from the fact that I knew the positive comments, as well as the negative, were honest and thoughtful.

They were wise enough not to get bogged down in critiquing the theology that I proclaimed; they focused on how the message was presented and how they were able to receive it. They were not afraid to tell me what worked for them and for people they knew, and what did not. They gave insight into whether or not I was addressing their questions about faith, and if not, what were some approaches that would get at the real issues.

Looking back on my career now, I wonder why I did not follow through on that once I became ordained. Why did I not set up a group whose purpose was to evaluate and give honest feedback on my preaching, at least in the early years? I’m trying to decide if this task could fall under the purview of a pastor support committee; I’m inclined to think it might.

If you have an idea about this, or have any other suggestions on how to get valuable feedback on sermons, I would love to hear from you.