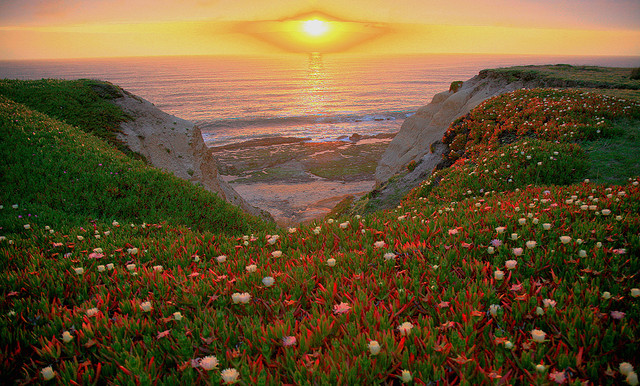 Easter and post-Easter lectionary passages naturally dwell on resurrection and salvation, themes that Christians sometimes separate from earthly concerns. Distancing heaven from earth in the lead-up to Earth Day (April 22) would be unfortunate. If we look closely, however, community is a vital lectionary theme recurring throughout the month of April, beginning on Easter. Human community, and more besides: scriptural writers imagine a cosmic community characterized by trust in God and lived out in a full and fruitful natural world.

(For more on links between Easter and Earth Day, see my April 2014 column. And here is a link to preaching resources especially on climate change from Hoosier Interfaith Power and Light.)

The wide community envisioned by biblical writers offers a powerful antidote to the isolation and materialism that degrade Western culture. Scripture reminds us that we thrive not as individuals alone with an individualistic God, but in sharing with other creatures, so that all are strengthened, both materially and spiritually.

Easter Sunday, April 5: Community emerges first in Acts 10:34-43 and Isaiah 25:6-9, two alternate Easter Day passages. Isaiah envisions a mountaintop where God alleviates hunger, swallows up death, and wipes away sorrow. Within three verses (vv. 6-8), the word “all” (kol) is repeated five times: “all peoples (twice),” “all nations,” “all faces,” “all the earth.” This is a holy feast with doors open wide.

Acts 10:34-43 likewise recounts Peter’s realizing for the first time that Jesus “is Lord of all” (v. 36). He emphasizes his growing awareness that the good news is good for everyone. This post-resurrection discovery of mercy’s wideness is something new for Peter.

Meanwhile, the resurrection story in John 20:1-18 poignantly tells of Mary Magdalene’s mistaking the risen Jesus for a gardener — an image with high overtones, given the creation stories’ attention to plants and planting, and God’s placing the first Adam to tend and keep the garden. What better image for the risen Lord than this, a gardener tending the earth?

April 12: Acts 4:32-35 describes shared ownership among early followers of Jesus. As a result of this shared economy, no one goes hungry. Psalm 133 exuberantly celebrates the gift of living together, comparing it to anointing with precious, priestly oil, and to the dew of the far-off mountainside of Hermon. 1 John 1:1-2:2 beckons others into fellowship, inviting all to daily integrity in God’s light.

April 19: On the Sunday before Earth Day, communion with God is emphasized. Acts 3:12-19 depicts Peter — who has just restored the health of a man begging for money — confronting the hypocrisy of those who surround him, whom he says “killed the Author of life,” and calling them to repentance. Psalm 4 describes the security of entrusting one’s safety to God. 1 John 3:1-7 calls the audience “children of God,” and in Luke 24:36b-48 Jesus allays the disciples’ fears and reminds them that God’s message belongs to all nations.

April 26: The Sunday after Earth Day is the most fruitful of all. Psalm 23 and John 10:11-18 draw upon shepherding imagery to describe trust in God’s provision for all needs, while 1 John 3:16-24, which closely echoes the John passage, instructs the audience to carry out God’s generosity by providing for the needs of brothers and sisters, loving “not in word or speech, but in truth and action.”

Such words may seem idealistic. But what if idealism, including the Bible’s lofty visions of “all,” becomes a springboard to imagine other ways to structure the world we have? Two new and promising economic movements have long-term justice dimensions that faith communities should be watching closely.

The first is a new economic index. When human life is a component of a thriving creation community, the Gross Domestic Product (GDP) makes little sense as a benchmark, because according to GDP logic, disasters that cost billions in hospital, damage, and clean-up costs are an index of well-being, while days when nothing bad happens fail to enhance the GDP and are therefore not valuable.

Because these old measures make no sense, the states of Vermont and Maryland are leading a movement to replace the GDP with the Genuine Progress Indicator (GPI), which measures sustainable well-being rather than dollar spending alone. Eighteen other states are investigating use of this measure, as well as many whole nations.

The second movement concerns international economic and ecological goals. Three worldwide summits that together could alter humanity’s course on earth will unfold this year:

Now is the time to throw our strong support toward these movements and the leaders promoting them. What better season than Easter and Earth Day to anticipate these grand, idealistic, but imaginable and even achievable plans?

We who long to see “God’s kingdom come, God’s will be done on earth” can turn our sights to movements such as these, seeking no less than the Bible’s own resurrection vision of universal, thriving community.