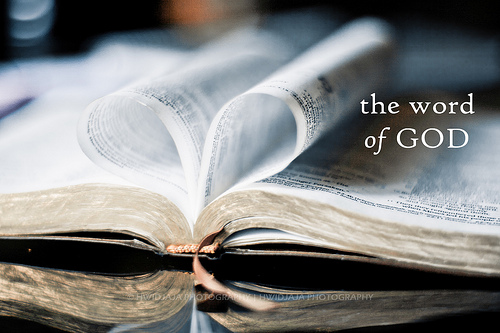 The Word of God(Creative Commons Image by jangkwee on Flickr)

A young woman came into my office yesterday, terrified.

I don’t know much about her background. She spoke broken English with a thick accent that made communication difficult.

The object of her concern was a human figure, made out of wire, with a hangman’s noose wrapped around its neck. She had found this in her bed. She did not seem to know where it came from or why it was in her bed.

But in her mind it was voodoo. Since she had found it, she had experienced great fatigue, and she was scared. Convinced that the figure was both evil and powerful, she had come looking for a place where she could escape its powers. A place where there was some stronger magic. A church.

She believed that my prayers as a pastor would be stronger than hers and that I might be able to negate the power of this evil.

But it was not the place for either a theological or psychological discussion.

All I could do was offer a prayer for her to calm her fear, take the object of her distress away from her, and promise to destroy it — which I did.

There are a great many people who do not understand religion. They believe pastors to be high priests of the magic arts, whose spells (the rite of baptism, for instance) can overpower the dark forces of the world. Those who believe in this sort of magic come to a church for a dose of it. Those who do not believe in magic dismiss all religion as bogus.

I don’t do magic. I am a microbiologist by background. I understand very little of the existence of spirits and their powers. I can’t tell you exactly where spirituality ends and superstition begins.

A few years ago, I was talking with a woman who had friends in a Christian sect who were urging her to submit to them so they could perform a miracle for her. I told her that we muggle pastors can’t do that kind of thing. We don’t claim special, superhuman powers. We do not provide miracles on demand.

That does not mean we are useless. Through the power of Jesus Christ, we are able to change lives. A young woman needed to be released from a dark power that had her tightly in its grip. That is exactly what the Gospel does. It calms our fears and takes the object of distress away and destroys it.

We don’t just preach because it sounds nice, or holy, or we like to hear ourselves talk. The Word is not magic, but it has power. Great power to bring God’s love and grace into the world. That is why we preach.