God of Death and Life 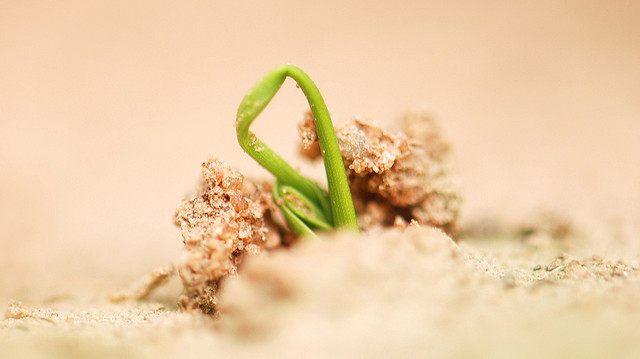 Death and life dominate the Lenten lectionary in March, beginning on the first day with Abram’s childlessness and the promise of continued new life through both his wives (Genesis 17:1-7, 15-16), along with the psalmist’s mysterious saying that “to him shall all who sleep in the earth bow down” (Psalm 22:29), Paul’s description of God “who gives life to the dead and calls into existence the things that do not exist” (Romans 4:17), and Jesus’ observation that “those who want to save their life will lose it, and those who lose their life for my sake, and for the sake of the gospel, will save it” (Mark 8:35).

Death and life reappear throughout the month, along with the sense that things are not as they appear. What appears to be alive will die; what appears to be dying or dead will spring up to new and fruitful life.

On March 8, the mute skies, which moderns consider inanimate, proclaim a living word (Psalm 19); and Jesus tells his opposers, “Destroy this temple, and in three days I will raise it up” (John 2:19).

On March 15, a deadly serpent in the wilderness becomes a sign of healing (Numbers 21:4-9); sick people, growing “near to the gates of death” (Psalm107:18) are healed by God; people “dead through the trespasses and sins in which you once lived” are “made alive together with Christ” (Ephesians 2:1-2, 5); Jesus comes so that those who believe “may not perish but may have eternal life” (John 3:16).

The following week, March 22, as prophet, psalm, and epistle describe deep metanoia as changes in heart through learned obedience (Jeremiah 31:31-34; Psalm 51; Hebrews 5:5-10), Jesus explains his own death, and with it the death of many people and movements, in this way: “Unless a grain of wheat falls into the earth and dies, it remains just a single grain; but if it dies, it bears much fruit” (John 12:24).

On Passion Sunday, March 29, the prophet describes himself as awakened daily to listen to God, who will vindicate him from destructive enemies (Isaiah 50:4-9a); the psalmist seeks divine deliverance from scorn and horror, from being forgotten “like one who is dead” (Psalm 31:9-16); Paul describes Jesus’ having set the example for Christians by humbling himself, obedient even to the point of death (Philippians 2:5-11). The month ends with Mark’s passion narrative, with its story of the woman who, anointing Jesus with pure nard, “anointed my body beforehand for its burial” (Mark 14:8).

Death and life, the Scriptures repeatedly proclaim throughout this month, are not what they appear to be. In fact, the reason we think of death as a tragic ending, and as diametrically opposed to life, both theologians and scientists tell us, is that we are thinking individualistically. Theologically, for Christians, death only leads to new life, whether it is the little death of suffering and disappointment that often prefaces a joyous reversal, or whether it is physical death, the path to eternal life.

Scientifically, everything living is created from what has died. Every element of our bodies has been recycled endlessly from ancestral beings, and will continue to live on in future generations. Though the unique being that is “me” only occurs once, this unique being is, physically, socially, emotionally, philosophically, religiously, ethically, part of the much larger stream of life that began with creation and extends long beyond ourselves.

This understanding of life as a collective experience, which we share even in death, means that for each of us, and for all of us together, there are things in this world not only worth living for, and living well for, but things worth laying down our individual lives for. If so, though death is ever with us, we need not fear. The things worth dying for are also the things for which we might take smaller risks: speaking out to neighbors and in the public square about right and wrong; facing jail to draw attention to injustice; working harder with less pay for causes worth our efforts.

Because we love both life itself and others who have died, death brings sorrow. Yet ultimately, for the faithful, all this talk about death in the lectionary offers liberation. It reminds us that our goal is not to live long (though that is nice) nor to become great (though that is nice too), but rather to live well, and when the time comes, to die well, attentive to what we are handing down to our children and their future children. It sharpens our priorities. And it inspires gratitude.