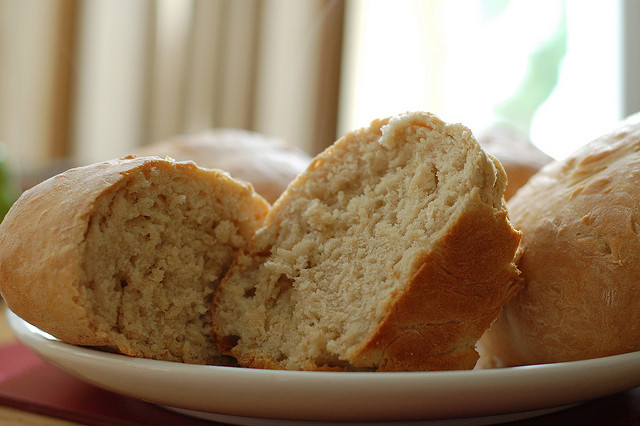 Food fills the menu in August’s lectionary. Four weeks of Gospel readings explore John 6’s discussions between Jesus and others following the feeding of the five thousand, while Old Testament readings and Psalms further reflect on food.

John 6’s conversation begins with a puzzling question from a crowd who had just feasted on bread and fish that miraculously multiplied. Their bellies still full, they ask, “What sign are you going to give us, so that we may see it and believe you?”

The unintended, unacknowledged ironies voiced by Jesus’ interlocutors in John often leave readers’ jaws hanging. Here, beneficiaries of a life-giving miracle demand a bigger sign. They appear even more oblivious to the wonders they witness than the prior wilderness grumblers who once complained, “There is nothing at all but this manna to look at” (Numbers 11:6).

But rather than take the low road of disapproval, we could see the writers of Numbers and John holding mirrors before our own faces. We could ask ourselves the same question: what sustaining miracles do we take for granted, or altogether miss?

My spouse and I grow fruit and vegetables in a borrowed plot near our home. Last winter he spread a load of composted manure, our offering for the garden’s health. Two days ago I harvested a crop of plump onions. Yesterday I discovered a first apple growing on a four-foot tree that had never made an apple in its life. Today I collected an eggplant, a cucumber, a cabbage, tomatoes, basil, parsley, and three kinds of peppers, and observed corn, beans, okra, fennel, and potatoes coming to fruition. Since March, asparagus, broccoli, garlic, peas, kale, raspberries, strawberries, lettuce, and spinach have already come and gone.

I should point out that this downtown plot is pretty small. Granted, we did apply compost and wait, but I’d still call this a miraculous multiplication given by God, food from heaven.

Without this constant witness to seeds interacting with sun, rain, and soil, working wonders that humans, with all our intelligence, could never achieve, the idea of food as a divine miracle would remain theoretical. We “create” meals of what nature gives, but like the Israelites in the wilderness, like the Galilean crowds, without the miraculous multiplication that only God provides, humans would simply starve.

When Jesus replies to the Galileans’ challenge by calling himself the bread of life, moderns often read him as disparaging the manna, in fact disparaging food itself, setting himself above these mundane, earthy processes, bidding the faithful to forget about food and concentrate on spirit. Such misunderstandings lead not to asceticism (we still have to eat), but to devaluing nutrition as a gift God gives to all humans and animals. We forget that God loved the Israelites, and therefore fed them every day. We forget that Jesus’ compassion compelled him to feed the crowd. We forget that following Jesus means doing the same.

Not only can spiritualizing Jesus’ words lead us to forget to the nutritional needs of hungry people. It can lead us to neglect the very processes on which we depend — climate stability, pollinators, topsoil, fertility itself — until we find ourselves in drought, or heat, or salinated fields, or some other agricultural crisis.

Jesus wasn’t disparaging the manna. He was drawing an analogy between himself and that legendary gift from heaven. As New Testament scholar Susan Hylen points out, the manna was more than physical sustenance. It was daily training in trusting God; it was living by God’s teaching word. In comparing himself to humble bread, Jesus reminded hearers that they too, like their ancestors — and like contemporary gardeners — haven’t got their fill when their bellies are full, but when they comprehend with gratitude the miracle they witness daily before them.1

Similarly, Pope Francis speaks of the Eucharist as joining heaven and earth:

Many August passages dwell on the gift of food, while others underscore the need for gratitude, generosity, and wise discipleship: