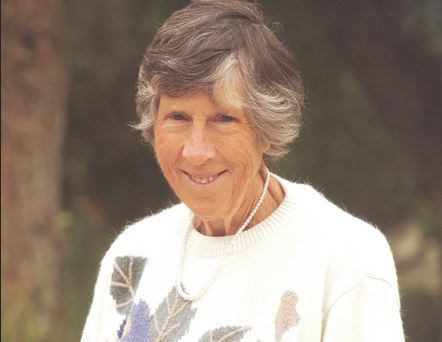 “As we continue to watch the regrowth, nature’s ability to recover after a fire is truly amazing and worth emulating. I challenge you to go out to the fire area. Enjoy God’s world in all its beauty. Suck up the fresh air and fill your body with new life. Become renewed in Spirit. What God can do in nature he can surely do in your life. May we bloom in all the glory of the lilies, stopping to pause for a moment, thanking God for all of the bounty around us.” Excerpt from a 1996 sermon by Dr. Barbara Collins, author of You Lead a Mean Trail (2012).

If I learned anything in preaching at all, I credit it all to a botanist. Sure, the heavy lifting of systematics helped, as did learning Greek and all the biblical scholarship. At seminary, I gathered all the tools for crafting a fairly cohesive, coherent sermon, but I learned to be a preacher from Barbara Collins.

Late last April, Dr. Barbara Jane Collins died in her sleep after an incurable lung infection. In my college years, I studied botany with her at California Lutheran University, and it was because of her, I fell in love with small things. It was from Barbara I learned to see, to notice, to be utterly taken aback by the humble, splendid beauty of a tiny lily, or how valley sycamores point us to water, or to revel in late nights in the microbiology lab where we simultaneously ate homemade ice cream and gloried in staph and strep gram stains. (She and her husband Larry bought me an ice cream maker for a wedding gift. We still use it.)

In her agile, astonishing, insistent botany world all things were worthy of beauty, and each had a name and personality. Ragweed lived up to its reputation, and as she pointed out, its pollen looked particular ominous and menacing taking on the character of a tiny medieval weapon. The chocolate lily always sent her over the edge with gratitude, and one could hear her scream at its discovery as if she bumped headlong into a Jesus himself. I remember her teaching about the life cycle of a liver fluke in sheep and as repulsive as the process was, she stepped back from the image to remark that the host snail was “just adorable.”

It came as no surprise to me that only days after her death, fires raged through the hills she so loved north of Los Angeles. The news, of course, reported how many homes were endangered or saved which are, of course, unquestionably important. But, I thought of Barbara and the wildlife. I thought of hardened seeds whose shells need fire to crack them. I thought of Barbara and how she would have known these fires are vital to rebirth. And with Barbara in my head, I thought of resurrection. I watched online as the maps showed the fires burning through Sycamore Canyon, a creek bed, where I had hiked with her so many times. I knew exactly what plants were burning.

I write this to preachers, I know, but it is because I have discovered the best preachers have had someone in their lives who taught them to notice. I write this for all those who came before us and pointed out to us what’s really vital, what matters, what is important in the kingdom of God. I write this because I’ve talked to my preacher friends who are caught up in synod assembly doings and “outlining” the upcoming year and feeling unbelievable loneliness because they’re taking care of so many people and congregation members who are firing at them to be this or that. They have forgotten, or are too tired to notice, to see, to be surprised, to play; to return to what originally called them into a pulpit.

Every day, we forget (except for the saints and most humble among us) we are no more than dust, and yet Solomon in all his glory was not adorned in such lovely attire as the desert lily. I write this because all of us who call ourselves preachers feel called in our deepest selves to point to Christ and what he’s done, we feel called to speak for the least of these in whatever form they take; we are called to say, yes, in God, there is hope and healing. We are called to help people notice. And, I write this for a brilliant woman, a botanist, a geologist, a pioneer, a mother, a wife, mentor, a writer, and a dear friend; the most articulate preacher of all simply because she felt astonishment at the lily, gracious and stubborn, and its promise to always return.

Of course, nature is an unreliable prophet. The sea, one day pacific, can the next day produce a tsunami after the earth scoots itself into a more comfortable position. And yet, we also proclaim that all creation speaks of Christ; if we do not, the rocks will cry out. From the very beginning, Christ was there, his spirit soaring over the waters and this Spirit created all things, in infinite and mysterious beauty. And I know, Christ, who always has a special fondness for the least of these, the lily and lupine and all who love them, is probably, as you read this, delighting in Barbara Collins, a very rare, gorgeous flower, who he so carefully and lovingly crafted. She, I’m sure, is enchanting him what he already knows and loves, but longs for us all to notice.

Thank you Barbara, for noticing, and for teaching us all to notice. For pointing to flowers, for believing in the resurrection of all things, and for preaching using words, as St. Assisi wrote, only when necessary (but if you’re hungry for words check out her book. Really). For in Christ’s world, as in yours, catching your breath at God’s small beauties is the deepest of prayer, the most authentic of praise, and the most humbling shape of gratitude.

P.S. Barbara Collins: I miss you. We all do.