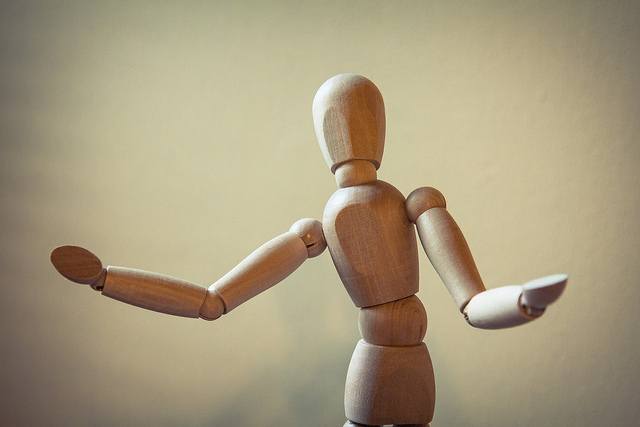 The Explainer explains.... Image by Ahd Photography via Flicker; licensed under CC BY-NC-ND-2.0.

I recall many years ago a national politician who was known for his awkward and contrived way of relating to audiences. A comedian spoofed this politician by impersonating his speech, something like this: “My fellow Americans, I say to you now, with a sincere gesture of my right hand, that . . .

This episode was brought back to me last week when I read an article in a magazine aimed at preachers, speaking about the importance of gestures in delivering a sermon. The article went on at length and in detail about ways to bring gestures into one’s delivery.

Perhaps my communications with fellow humans would be more effective if I used my hands more in speech. Perhaps my failure to do this is a fault that I have been negligent in failing to correct over the years. I do not see a lot of evidence, though, that this fault is either significant, or a moral failing. That’s just how I am.

I am closely related to a number of people who do use their hands, continuously, when they speak. I am fascinated to watch them converse on the phone with their hands energetically punctuating their speech even though the listener cannot see these gestures. The fact that these gestures are not accomplishing anything as far as communication is concerned convinces me that, just as my sparse use of gestures is a part of who I am, their reflexive gesturing is a part of who they are.

Were I to begin speaking with my hands during my sermons, my congregation wouldn’t know who this person in the pulpit is. Just as there are those who if they tried to refrain from gesturing would seem like strangers.

I have been convinced by worship experts that use of gestures can have a role to play in leading ritual worship, particularly with blessings and benedictions. But I am of the opinion that the most important element in preaching is authenticity. The listeners have to believe that one proclaiming is a real person — a person without pretense or ulterior motive, who truly believes what he or she is saying, who is not putting on a show, or manipulating the audience, who is simply called to share a word from God.

Authenticity cannot be attained by a calculated hand gesture. Hand gestures can be authentic; by all means, I encourage those who routinely speak with their hands to keep doing so in their sermons. For them, that is authentic speaking. For those of us who do not speak with our hands in everyday interaction, there is nothing to be gained from reinventing ourselves in the pulpit.

In Nathan Aaseng’s bimonthly Working Preacher column, “Preaching Life,” a writer and preacher reflects on the rhythms of preaching in a parish in central Wisconsin.