Preaching the Easter Vigil: Notes on an ancient sermon 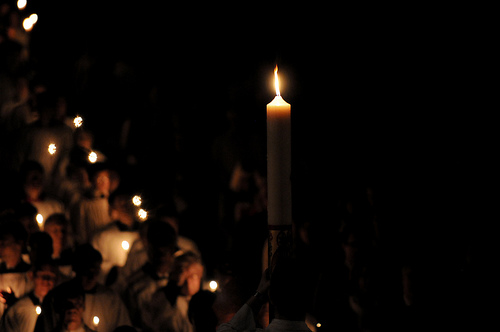 The Vigil of Easter is just what it says: a vigil. At the Vigil, we remember that Jesus is dead, gone “to crush hell underfoot,” as the old Hippolytan eucharistic prayer has it.1 We listen to the story of who we are, and we respond to the readings with widely varied songs while we clutch our candles. Little lights against the darkness, we await the Resurrection.

In my experience, holding the Vigil takes about 2-1/4 hours including all the parts found in Evangelical Lutheran Worship (pp. 266-270). Time flies because the stories are so good, and sitting with other people in candlelight is entrancing. For many people, it is their favorite liturgy of the year.

Anyone who looks at the list of readings knows there are many: twelve Old Testament readings, an Epistle, and a Gospel reading. Some preachers may deem this too daunting, but it need not be. This is a night for pure gospel preaching. When the one who was to save us is trampling down death, we need to hear that God’s power is sure, that we should not be afraid.

The Vigil sermon should enact hope in the one who was raised from the dead. This is, of course, what ought to be preached weekly from every pulpit, but on the night of the Vigil, it is of particular importance. Having a model can help.

One sermon that has long been held out as the exemplar of Easter gospel preaching has been attributed to John Chrysostom (347-407), but scholars believe it is from Pseudo-Chrysostom, someone who honors Chrysostom by imitating his voice.2

Chrysostom (“golden mouth”) was born in Antioch and served in Constantinople. His scriptural teaching applied practical, biblical precepts to everyday life. In part, his sermons chastised those who did not use their riches for the relief of the poor. He particularly angered the emperor’s wife and was banished in 404.

From the voice of this Easter sermon (no matter who wrote it), we have much to learn about gospel preaching for such a sermon does not ignore the darkness afoot in the world or avoid insisting on the duties of the faithful. Pseudo-Chrysostom attests that among us are those who lack consistent faithfulness (perhaps all of us?), coming to the feast “at the eleventh hour.”

Some of us are conscientious, but even those who are “lazy” (all of us?) should celebrate. Along with those who have fasted, we who have failed should “rejoice, this day, for the table is bountifully spread … Let no one go away hungry.”

To say that this sermon is gospel means that it sets human failure next to God’s deep understanding in such a way that we see God’s power shining upon and overcoming our failings. An honest person must sigh great relief that God fully knows and fully welcomes us. Preachers cannot say a convincing word about God’s merciful embrace of us if we do not lay out the reasons why this love is so astounding.

You will notice that this sermon does not deal specifically with any of the scripture readings. Instead, it focuses on the point of the entire liturgical experience: that God overcomes all that means to destroy, that God welcomes all who yearn to belong.

In very few words, this sermon assures us that God’s divine power has saved us from ourselves. The sermon does this by first depicting hell as a tangible place where the crucified one has desecrated hell’s strength and then extending the metaphor of hell from that of a place to that of a living being. The preacher attributes emotions to hell, says hell feels itself torn apart — in “turmoil” — until nothing is left of it. Oh, what a joy to preach such good news!

In the next move, the preacher twists the image so that we see Jesus, the rabbi who was murdered on a cross, in a new definition: “Hell grasped a corpse, and met God. / Hell seized earth, and encountered heaven.” Why is this such a strong statement? The incarnation is recognized by evil itself. Proclaiming makes it so. The word “performs” what it describes. The preacher doesn’t simply talk about the metaphor of supreme horror; the preacher addresses hell directly.

As if that wasn’t enough, the final lines of this sermon cry out what the rising of the crucified one has brought into being: hell is thrown away, demons are dead, and angels sing with joy. Liberation is real. This is the truth of the Resurrection. It is unbelievable; it must be proclaimed.

At Grace Cathedral in San Francisco one recent Vigil night, after the Old Testament readings, twenty adults were baptized. The entire assembly, then, followed the newly-baptized through the darkened, echoing sanctuary to stand near the altar table from which the bishop preached. At the final paragraph of Pseudo-Chrysostom’s sermon, his arm shot up into the air each time he shouted “Christ is risen … !” I saw the Resurrection, standing with all the saints in light. We rejoiced as we ate together. This is the gospel. Amen.