Preaching Baptism in the Days of Easter 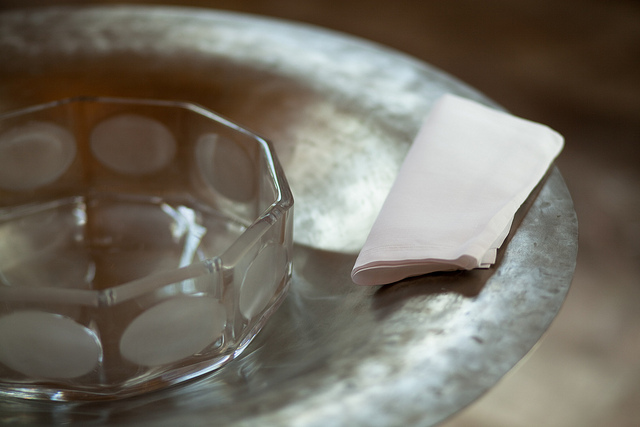 When I served a church in Atlanta, the churches on Ponce de Leon Avenue — Methodist, Presbyterian, Baptist, and Lutheran — met outside in the glorious Southern spring to celebrate Palm Sunday together. After blessing the palms, we marched to one of the churches for the remainder of the service. One year, at the Baptist church, the pastor preached, ending his sermon with what sounded like a liturgical altar call. The words flowed as if they had been said countless times. He invited anyone to give their life to Jesus. He paused, just like you would if you were saying, “Speak now or forever hold your peace,” maybe breathing twice, then going on with the service.

Then, someone raised her hand. Obviously surprised, the pastor invited the young woman to come forward, giving instructions to the organist to sing a hymn. While we sang, we could see him speaking earnestly with the woman, his hand on her shoulder. When the hymn was over, the pastor announced that she would come to be baptized the next Sunday on Easter. The assembly erupted in applause, and the tears flowed: hers, the pastor’s, ours.

As a German Lutheran, formed by a stereotypical understanding of the Southern, Evangelical “altar call,” I was inspired. We struggled at my own church to call the already-baptized into membership. People resisted attending a series of classes, some of them already on top of their theological game, others just wanting to be part of a serving community, not really interested in the nuts and bolts of jurisdictions or doctrine. Still others had schedules that precluded every-week attendance.

The evangelism team decided that we would take up the “altar call.” On four Sundays a year, we called the assembly to the waters. Those who wanted to join were invited to come forward to affirm their baptisms. We were often surprised about who came forward. After a few times, we included a call to baptism, an invitation to follow Jesus — to journey through the waters into a life of resurrection faith.

I discovered that the liturgical invitation wasn’t enough. The sermon needed to serve this profound call to the water. The day’s texts and the sermon hymn drove to that moment when we stood together at the font, inviting the unbaptized to come to grace.

In these days, when it may be increasingly likely that those who come to our tables have not already come to the font, can the mainline church recover this evangelical call to discipleship through the waters of Baptism? As I write, we stand near the edge of the great baptismal feast, either at the Vigil or on Easter morning. Could these coming days of Easter, as Christ sends us back to Galilee, to our regular church life, be a season to recover an invitation to baptism? Could our preaching be as evangelical as it is gracious?

The Easter season is perhaps our most sacramental season — the paschal candle, Christ’s presence, burning near font and table. What if our preaching could capture the deep joy of resurrection that we find in the water? What if we assumed that these waters flowed with their own invitation to come? Is there one as unlikely as the Ethiopian court official in Acts 8 who comes forward to say, “What is to prevent me from being baptized?”