Book Review: “The Four Gospels on Sunday” by Gordon Lathrop 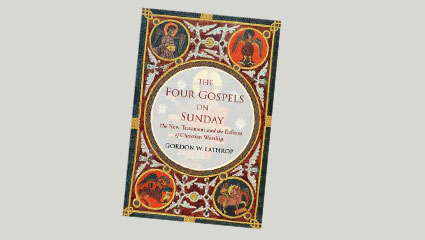 Reviewed: “The Four Gospels on Sunday: The New Testament and the Reform of Christian Worship” by Gordon W. Lathrop (Minneapolis: Fortress, 2012)

Gordon W. Lathrop engages us in a truly cross-disciplinary work, juxtaposing Bible and liturgy, having them each speak to the other, yielding imaginative, rich, stimulating, even godly meaning for every Christian assembly.

Citing the need for the renewal and continuation of this dialogue between liturgical theologian and biblical scholar, Lathrop demonstrates how the Gospels have an attention to the assembly, how Scripture comes alive beyond the desks of commentary writers, personal devotional booklets, or online preaching resources and speaks as a living, reforming voice. At the same time, he challenges liturgical scholarship to take up the New Testament texts with more than a naive or uncritical use.

The Four Gospels on Sunday begins with the intriguing and ancient association (dating back to Irenaeus of Lyon) of the Four Gospels with the four beasts: Mark like a lion, Luke like an ox, Matthew the one with a face like a human face, and John like a flying eagle (xviii).

The four beasts come from Ezekiel but most notably Revelation 4 and 5, where these living creatures worship the Lamb seated on the throne. One meaning is made clear from the outset with these four symbols: there is not one symbol, there is not one text, there is not just one word (as Lathrop would also insist in his public teaching) that can speak Jesus, crucified and risen.

Another meaning becomes equally clear throughout the pages of this provocative book: each of these words, each of these beasts, each of these gospel texts has its own character, flavor, dynamic, issues, questions, proposals for reform, and structure for proclamation. A third significant factor also arises as one dives deeper into the imagery Lathrop evokes: this book is a symbolic interpretation of Scripture. It proposes a (perhaps) new genre of engaging the biblical text, one that every pastor, preacher, and theologian will find challenging, creative, and vital.

Lathrop begins by exploring what the word “gospel” really is in Scripture, tracing its usage not to the Four Gospels but back to Paul’s proclamation and his twisting, distorting, reconfiguring of an expression common in the ancient world for the good news of a Roman emperor to a very specific, singular, usage to announce another type of lordship — that of Jesus Christ, God reclaiming the world.

Lathrop then proceeds to analyze over three chapters the Four Gospels (Matthew and Luke, though dealt with separately, are treated in one chapter as two synoptic expressions). These three chapters are worth their weight in gold. The specific character of each Gospel is highlighted, particularly how it addresses each and every local assembly for the sake of reforming the practice of that assembly.

This is the critical point: the Gospels are not just stories about Jesus. They are not just narratives. They are living speech making Jesus, crucified and risen, the Jesus, crucified and risen in this moment, in and for this assembly gathered in worship. The focus of the reform that the Gospels engage is always based on book and meal, on word and sacrament. The reading of the book, the reading of the Gospel, is the moment, the place of encounter with the living Christ. And the meal, which is of primary concern in each one of the Four Gospels, each with varying concerns and emphases, is the enacted book.

The final chapters deal with current issues of reform and how the four beasts still speak to us today, asking: How are our assemblies places of word and sacrament, places living the gospel for the neighbor? And then, what does this imply for preaching, eucharistic celebration, and baptism? Another chapter addresses the matter of leadership, especially the critique of leadership and its reversal (as witnessed in the Gospels themselves), and finally a call to retrieve the deep connection between biblical scholarship and liturgical theology, between Scripture and worship.

This final point is perhaps an underlying concern of the entire book. In a culture of worship that looks to and uses Scripture variably as a source of rules for living or simply as a narrative, as a source of information about God and the Christian story, or sometimes as a pedagogical tool (something that is not to be belittled, particularly in a post-Christendom society), Lathrop proposes a truly doxological approach to Scripture. He gets at the heart of what lectionary usage is all about.

The lectionary (in this case, the Revised Common Lectionary) is not just three long readings that an assembly needs to sit through and then suffer a sermon that addresses only one point from, perhaps, the Gospel text (if it even does that!). Scripture — the Bible — in the worshiping assembly is a juxtaposition of stories, of images, of symbols that call out to one another, critique one another, correct one another and incite within the assembly praise for the one in the center, on the throne, the Lamb of God.

Lathrop’s fine analysis of the four Gospels will be an invaluable resource to anyone planning worship and preparing to preach and preside, for it places the words, the images, the symbols of Scripture — those symbols that the Four Gospels used to reform worship and practice in the nascent Christian assemblies — next to the ritual actions every assembly hopefully enacts from week to week and invites into a sustained movement of renewal and reform.

A version of this review was published in the Spring 2013 issue of Word & World: Theology for Christian Ministry. Access the full review at http://wordandworld.luthersem.edu/issues.aspx?article_id=3710