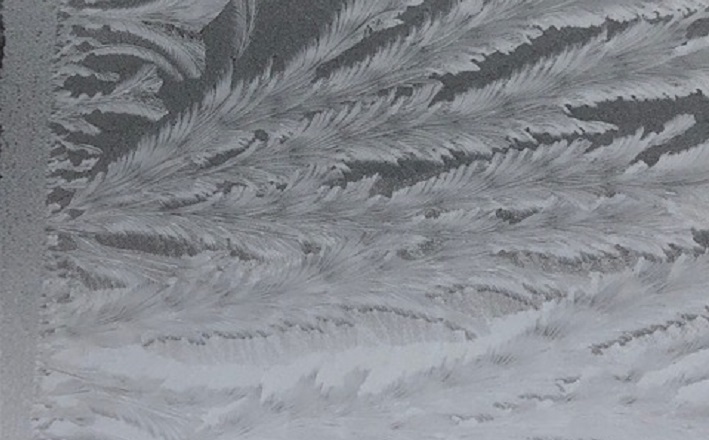 As I write in February, awaiting spring, Easter, and Earth Day (April 22), outside it is 18 degrees, cloudy and dark.

Snow and sleet cover the air, the ground, and the solar panels; the pond is thick with ice. In anticipation of single digits, my spouse and I created a homemade heating system for the greenhouse to protect our winter greens. And, as if it knows what the greenhouse is for, frost on the windows has assumed the unexpected visage of unfurling ferns, anticipating the vegetative growth that will soon appear.

Some seasons it is easier to carry hope than others. Last year, we are told, was yet again one of the warmest on record, capping off a decade of relentlessly deteriorating climatic conditions. Ironically, the forces that brought a sweltering summer have also wrought another polar vortex, rendering pandemic precautions even harder as the virus mutates into more dangerous forms.

And yet, like the hope of spring, we also see glimmers of global progress, redemptive acts, shifting human history. COVID vaccines are rolling out. The U.S. has rejoined the Paris Climate Accord. More federal lands are becoming protected from environmental degradation. Industries are leading: General Motors announced its all-electric vehicle future; asset manager BlackRock adopted a climate-focused investment strategy; coal-fired power plants are closing—even in coal-producing states—and all over the world; renewable energy and energy efficiency are growing exponentially. Faith-based earth care continues to rise. It is as if we were living through the longest Easter vigil ever.

The first thing the Bible tells us on page 1 is that God created the world, its features, and its creatures, and seven times called them good (Genesis 1:4, 10, 12, 18, 21, 25, 31). Page 2 (Genesis 2:15) describes the vocation God gave to humankind to till and keep—or, more accurately, to serve and preserve the land. Genesis 3:17-19 and Genesis 4:1-16 recount the breakdowns occurring almost immediately with the land, one another, and God, and begin the story of the blunders polluting both the earth and our own well-being. The rest of the Bible, and the rest of faith history, narrate the divine project of redeeming humanity from such blunders, long-arced divine redemption that might just make us whole again. In patience, God promised never to destroy the earth again with a flood, but did not promise to keep us from destroying ourselves. It’s up to us, with God’s guidance, to make that promise and live into it.

With the spring come new opportunities to choose how we humans will treat creation. With Easter comes the remembrance of God’s redeeming us despite ourselves. With Earth Day comes the chance both to celebrate the world’s splendor and to revitalize our own pledges to our descendants, pledges to live out our first vocation of serving and preserving God’s earth. As faith leaders and spokespeople, how will we spread the good news this season?