Sanctuary, the Bible, and Clarification 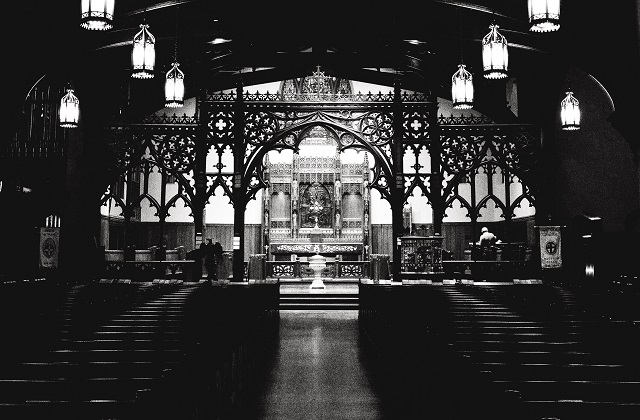 Photo by Jack Sharp on Unsplash; licensed under CC0.

Over the summer, you may have heard in news and social media feeds about an action taken by the Evangelical Lutheran Church in America (ELCA), my denomination. If so, you may have associated the ELCA with a word that sounds innocent yet is loaded with significance: sanctuary.

In August, the delegates of the ELCA voted at its8 Churchwide Assembly to become a sanctuary church. (To learn more about what this does and does not mean, I direct your attention to these ELCA links: website, YouTube video primer, and downloadable PDF policy brief.) In the following weeks and months, I’ve noticed that discussions concerning this decision usually start with the same thing: What the Bible says about sanctuary.

Yet very rarely are we discussing what the Bible actually says about sanctuary—that is, the sacred space where the line between the divine and the human realm becomes blessedly, dangerously, thin.

Instead, we talk about the modern concepts that have become attached to the word “sanctuary”: asylum, refugees, protection of the vulnerable. In discussions, the Bible verses referenced reflect not the physical space of sanctuary, but something that the Bible says about these other important modern concepts.

What I’d like to do here is to unpack a little bit about what the Bible actually does and does not say about the physical, sacred sanctuary space. The Hebrew word for sanctuary is miqdash, which means “sacred place.” According to the Harper Collins Bible Dictionary, sanctuary in the Bible is “[a] holy place where God is present. In the wilderness, this was the tent of meeting; in the time of Solomon, it was the Temple at Jerusalem. In both places, the Lord’s presence was made visible as a pillar of smoke during the daytime and a pillar of fire at night.”1

“A holy place where God is present” sounds like balm to our modern ears. But God’s presence in the Hebrew Bible both was and was not a good thing for humans. The fact that the Almighty Creator of the Universe would deign to make a habitation among humans was, of course, good news for God’s people.

Good news—but not particularly safe news. The raw power of divinity was dangerous for humans. In 2 Samuel 6:7, as King David processes into Jerusalem, leading the Ark of the Covenant (the holiest object in the sanctuary, a lodestone of divine power), the cart carrying the Ark lurches. The Ark totters, and a man named Uzzah stretches out a hand to steady the Ark. The instant he touches it, he is struck dead by an outburst of divine power.

There are, however, examples in the Hebrew Bible of humans seeking refuge in the sanctuary. Two, to be exact: Adonijah in 1 Kings 1:50 and Joab in 1 Kings 2, the one a royal usurper to David’s throne and the other a royal hitman for David’s army. Both men enter the sanctuary and lay hold of the altar, convinced that their nearness to the holy place of God will ensure their safety from Solomon’s wrath; for who would dare to spill blood in God’s presence? Adonijah the usurper was right; Joab the murderer, however, was wrong, and his lifeblood mingled with those of the animal sacrifices on the floor. The concept of seeking refuge in the sanctuary was present in the Hebrew Bible, but it was a minor idea at best, and an ambiguous one at worst.

Bishop Jon Anderson from the ELCA Southwest Minnesota Synod wrote a response to the ELCA decision soon after it was made. In it, he writes about a time when he was vulnerable to harm and to danger: a 7th-grade boy, moved up to varsity wrestling, dressing in the same locker room as a group of high school young men who were not pleased at the presence of this interloper. He writes:

They were picking on me with their mouths, snapping me with towels, and pushing me around. That was when my teammate Alvin stepped in and said, “That is enough.” He came and stood between us. He made it clear that he would protect me. He told them they needed to stop. He protected me when I was so vulnerable. I did not know him really at all. I still remember it. Jesus came to call us to protect and love our neighbors and strangers and even our enemies.2

For Anderson, the core of the issue is protection of the vulnerable. Leading with that discussion will lead to much more productive places than getting looped into an argument about the word “sanctuary,” either in politics or the Bible.

We all, as pastoral leaders, need to clearly define what is at the core of this issue for us. When the core of the issue is clearly identified, the biblical images will present themselves—and, they will more firmly support the call that we feel from God.

For me personally, the core of this issue has to do with healing. When we follow the biblical image of the sacred space of sanctuary through to the end, we find an image in Ezekiel 47 that is taken up in the Revelation 22. In the final moments of the prophet-priest Ezekiel’s encounter with a divine messenger, Ezekiel is brought to the New Temple—the New Sanctuary. Under it are flowing rivers of water, whose banks are flush with trees, heavy-laden with fruit. The messenger say to Ezekiel,

“[When this water] enters the sea, the sea of stagnant waters, the water will become fresh. Wherever the river goes, every living creature that swarms will live, and there will be very many fish, once these waters reach there. It will become fresh; and everything will live where the river goes … On the banks, on both sides of the river, there will grow all kinds of trees for food. Their leaves will not wither nor their fruit fail, but they will bear fresh fruit every month, because the water for them flows from the sanctuary. Their fruit will be for food, and their leaves for healing” (Ezekiel 47:8-9, 12).

A river, flowing out of the sanctuary of God’s holy presence; a river, the touch of whose waters brings life to stagnation; and trees, roots nourished by that river, whose leaves shall be for healing.

In Revelation 22, another messenger of God shows a vision to another man: “the river of the water of life, bright as crystal, flowing from the throne of God and of the Lamb through the middle of the street of the city. On either side of the river is the tree of life with its twelve kinds of fruit, producing its fruit each month; and the leaves of the tree are for the healing of the nations.”

At the end of its biblical path, the sanctuary is the source and ground of healing for all nations. May we swim and move and have our being in these waters, so that we might be sent out to all nations as healers of God.