Read Before Preaching: Forming Communities of Resistance (2 of 3) 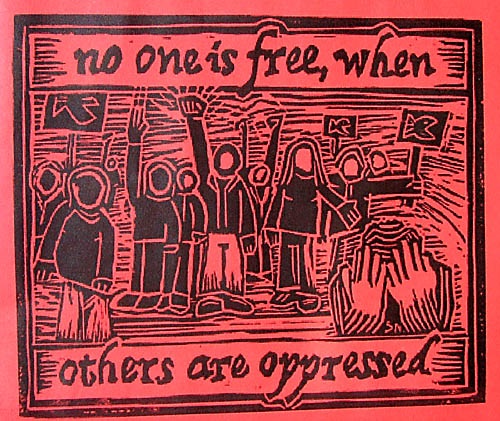 Preachers who want to form communities of resistance must give an answer to a very serious question: Has my preaching, my tradition, my denomination, or any other connection I have in this world, condoned or been complicit even through silence in any form of oppression against anyone or anything in God’s creation?

As I write this piece, I am deeply grieved by what has been proclaimed over centuries from pulpits all over the world and called Gospel preaching, that has fallen on the ears of any group of people as anything but Good News.

Messages preached from the local church to St. Peter’s Basilica have divided nations, segregated communities, and split congregations. This preaching has supported the creation of class systems, upheld the status quo, and rubber-stamped the policy through misappropriation and intentional misinterpretation of scripture for their own ends.

To get more specific, David M. Whitford’s The Curse of Ham in the Early Modern Era: The Bible and the Justifications for Slavery discusses the interpretation, understanding and application of the story of Noah’s curse from Genesis 9 and how it ultimately came to be used as justification for slavery and erroneous teachings on race and class. Whitford uses reception history to develop an understanding of “how people in the early modern era understood Noah’s curse of Canaan — how they used it, how they changed it, and how it changed them”1 (emphasis mine). Whitford classifies Genesis 9 as a text of opportunity, meaning it is a text that raises questions by what it does not say. Readers and commentators filled in the blanks on their own and “clearly left the realm of exegesis — that is, the act of examining what a text means — and entered the arena of myth building” (Whitford, 15).

This myth building continued through sermons, popular fiction and propaganda, leading to the use of Genesis 9 as proof that the claim of African inferiority was of God’s design. Referencing the work of Ulrich Luz, Whitford explains Luz’s position that, “Because biblical texts claim to contain revelations from God to humanity, they do not have a ‘simple’ fixed meaning, which would be identical to their original meaning; they have the power to create new meanings for new people in new situations” (Whitford, 12).

This begs the question; how many other texts have been used to reinforce stereotypes and prejudices? What text could you as an interpreter and expositor have possibly preached in this manner? Is your preaching unintentionally reinforcing any form of oppression? Is your preaching preventing the formation of authentic community?

Preaching to form communities of resistance will take reading and listening broadly in several areas: historical, theological, hermeneutic, and homiletic. Since communities are formed in context, it is critical to know as much as possible about the context in which you preach. Current data on educational and healthcare systems, the practices of law-enforcement and social services, gerrymandering of voting districts, banking and housing practices, along with the equitable distribution of tax dollars for neighborhood services, are essential issues for the local minister to grasp. Understanding national, state, and local history will help separate myths from realities on the timeline of social and political developments in the United States.

Eric Foner is one of the nation’s foremost historical scholars who has documented with clarity the social, political, and economic history of United States. Foner’s 2017 work, Battles for Freedom: The Use and Abuse of American History, uncovers the complex history of the United States and brings to bear a critical review of ideas, events, and people. This work can help the preacher relate how we have come to the current moral and political crisis, that it is not a recent phenomenon but a systemic part of U.S. history.2 This understanding helps lay the groundwork for a community of resistance that understands the historical truths about the development of the nation.

At many points in American history, the pulpit has been co-opted to favor oppressive agendas. Dr. Charles E. Booth’s book, Bridging the Breach: Evangelical Thought and Liberation in the African-American Preaching Tradition, provides a history of the rise and the message of the New Christian Right and modern white evangelical preaching that has served to reinforce the status quo in politics, economics, and race.3

Another timely work on the history of the white Evangelical church’s oppression from the pulpit is Jemar Tisby’s The Color of Compromise: The Truth About the American Church’s Complicity in Racism. Breaking down barriers to community by knowing and acknowledging truths about the nation and the church will serve to set up an atmosphere of reflection that can lead to repentance.4 Repentance can move beyond a question of personal salvation to bearing fruits worthy of repentance that include opening hearts and doors to more inclusive community.

In the area of theology, I suggest refreshing your views with Awake to the Moment: An Introduction to Theology, edited by Laurel C. Schneider and Stephen G. Ray, Jr., and written collaboratively by The Workgroup on Constructive Theology. The writers state, “Theology that locates itself at the center of life where the needs are greatest is also theology that actually can help make a difference in the world.”5 They also seek to decentralize the presumption of the superiority of Western culture and white expressions of Christianity. The writers argue that working for justice is a norm in Christian tradition and, “involves identifying and describing the Christian teachings and practices that nurture God’s promises for justice, peace, and the integrity of creation.”6 This constructive theology fights against the “othering” of dissimilar groups and seeks ways to fight environmental distress, corporate wealth production, and working poverty. I suggest reading Ethics of Biblical Interpretation: A Reevaluation by Daniel Patte alongside Awake to the Moment. Patte argues that, “Critical interpretation is a praxis that is intrinsically ethical, because from its starting point to its concluding point it is structured by concerns for others (and the Other).”7 It argues that traditional critical exegesis from a male, European-American perspective has done a great disservice, having resulted in marginalizing women and other groups. Patte concludes that interpretation from this perspective alone has made biblical interpreters and the ordinary Bible reader into a proponent of racism, classism, sexism, and colonialism. Ethically responsible exegetical practices are multi-dimensional and “will not oppress other people or promote injustice.”8 Finding interpreters that have taken up these multi-dimensional exegetical practices and expanding your theological outlook is essential to preaching to form communities of resistance.

A fresh view of Biblical interpretation with hermeneutic expressions that may be unfamiliar or different from your own is essential to preaching. In the work Fire By Night: Finding God in the Pages of the Old Testament, Melissa Florer-Bixler has wrestled with the Old Testament text and come away with deep and timely insights. Her chapter on Genesis 19, titled “God of Victims,” gives eye-opening commentary on the destruction of Sodom and Gomorrah.

Far from the usual condemnation of the LGBTQIA community, she presents Genesis 18 and 19 as “a case study in oppressive systems, a narrative that invites us to consider a violence so pervasive, so destructive for the people who are caught up in it, that it takes a miraculous and devastating intervention from God to undo it.”9 In her commentary she raises the issue of systems of routinized violence and how we become witting or unwitting participants in those systems. For Florer-Bixler, God is a God that breaks apart these oppressive systems. If the preacher is blind to the history and presence of systematic oppression, there is no way your preaching can act to resist those systems and may even cause your preaching to be supportive of those systems because of failure to expose and denounce them.

Another great thought- provoking viewpoint comes from Willie James Jennings, whose article “Eco-Theology and Zoning Meetings” expresses the need for a richer doctrine of creation in church life. Jennings promotes a practical theological working out of the doctrine of creation that understands that there are moral and pragmatic consequences to the working out of an eco-theological vision. A deeper expression of creation doctrine recognizes the struggle for habitation and how corporate, capitalistic, and political ideologies have determined what is possible, usually in favor of the dominant class. Jennings sees a relationship between eco-theology and local policy. “I want people of faith to crowd into those zoning meetings. You discover how segregation is built inside real estate policy, how violence is formed inside zoning policy. Policing practices always follow zoning practices.”10 In giving these voices a hearing, you may need to set aside voices you have been more inclined to hear over the years. These may be the voices of mentors or the voices in your tried and true commentaries that have interpreted only through a White, male, western, Eurocentric lens. Opening your ears and heart to these voices will open the door to journey into the lives and stories of those with whom you may not have shared community.

If preaching is anything, it is imaginative. Bruggemann in The Prophetic Imagination reminds us that imagination is a theological force. Preaching that stops at the goal of personal behavioral change is not enough. In Bruggemann’s preface, he relates the cultural situation of the United States as “satiated by consumer goods and propelled by electronic technology, is one of narcoticized insensibility to human reality.”13 Moral and prophetic imagination in preaching has as its goal to bring us out of this narcoticized insensibility that has us living in an imagination described by Brueggemann as “that of ‘the generals and their opponents,’ or that of consumer ideology and its resisters.” But the hope in preaching that forms communities of resistance is that we can move human beings out of this American imagination and enable ourselves through prophetic imagination to live inside God’s imagination. Brueggemann encourages this move into God’s imagination by reminding us, “What the prophetic tradition knows is that it could be different, and the difference can be enacted.”14 Therefore, a community of resistance can be formed that refuses to “live inside an alien, numbing imagination and embrace the very imagination of God.”15