Naming the Name of Jesus 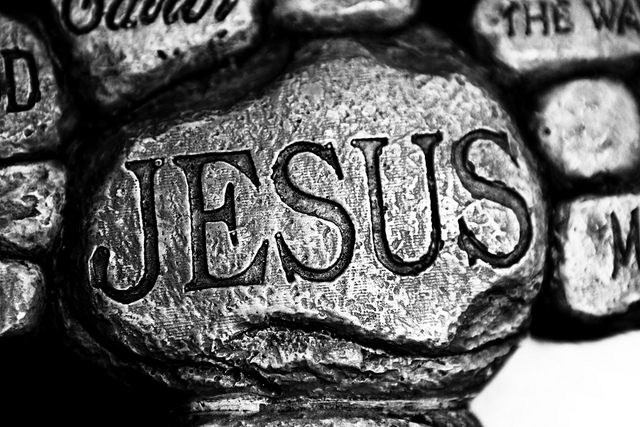 “Preach the Gospel at all times, and if necessary, use words.”

This saying, attributed (apocryphally) to St. Francis, has become popular in the last few years among students at my seminary, judging from the many papers I’ve read that include the quotation.

It is a lovely sentiment, really. Preach the Gospel at all times, and do it by living a life worthy of the Gospel, working for justice and peace. One can imagine Francis saying this, he who renounced wealth to live among the poor. Of course, Francis was also a noted preacher of his day, so it seems he felt it necessary on many occasions to “use words.”

I must admit, I cringe whenever I hear, “Preach the Gospel at all times, and if necessary, use words.” Why? Because, frankly, the problem it addresses is not the problem of the mainline church, of which my seminary is a part. Generally speaking, mainline churches do a fairly good job of preaching the Gospel through actions, but we suffer from what Rachel Wrenn, in an article from June 2016, calls a “spiritual speech impediment.” We answer Jesus’ call to care for the “least of these” (Matthew 25:40), but we often ignore Jesus’ call to “make disciples” (Matthew 28:19). And both are foundational to proclaiming the Gospel.

I am reminded of a conversation I had a few years back with a former student of mine named Galgalo, a pastor in the Ethiopian Evangelical Church Mekane Yesus (one of the fastest-growing Lutheran churches in the world). Galgalo spoke to me about his puzzlement over American churches’ hesitation to evangelize. He was speaking specifically about his visit to an American church that had a vibrant ministry to Muslim refugees, providing tutoring in English, assistance with housing and food, and other social services.

Now, I know that congregation had what they thought were good reasons for not evangelizing. They did not want to coerce or pressure the people they were helping. But Galgalo had a point. We as the church are not primarily a social service agency. We are called to preach the Gospel at all times, through actions, yes, but also through words. We are called to witness to what God has done and is doing in our lives.

We are called to name the name of Jesus.

January 1 in the liturgical calendar is the Festival of the Holy Name of Jesus. Mary and Joseph, following Jewish law (in Leviticus 12:3), have Jesus circumcised and named on the eighth day of his life (Luke 2:21). So the church observes this festival on January 1.

The Gospel text appointed for the day begins with the very familiar story of Jesus’ birth as told in Luke 2, but it focuses on what happens after the shepherds see the infant Messiah:

After eight days had passed, it was time to circumcise the child; and he was called Jesus, the name given by the angel before he was conceived in the womb. (Luke 2:17-21)

Over and over again in Scripture, those who have encountered God go and witness to others about what God has done — the psalmists, the prophets, the woman at the well (John 4), the Gerasene demoniac (Luke 8), the apostle Paul. The shepherds are no exception. They do not keep the good news (gospel) of Jesus’ birth to themselves. They share it with anyone who will listen, praising God for all that they have heard and seen.

Naming the name of Jesus — it does not have to be done as a door-knocking evangelist. (I tried that once in high school with an evangelical youth group, and it was excruciating for me, a painfully shy teenager.) It is simply about sharing the good news of what God in Christ has done for us. It is about being a witness.

The Washington Post, in a recent article, told the story of a young pastor, Eric So, who left a comfortable home in the suburbs of Washington, D.C. to move with his young family into an apartment complex populated by recent immigrants, refugees from around the world. As the political climate became more hostile to refugees, the So’s were inspired by the incarnation, God’s radical act of dwelling with human beings, to move into their neighborhood. Pastor So works as a tutor, counselor and social worker, and he also witnesses to what God has done in his life.

“I see it as for myself, personally, this good news of Jesus is the best thing ever in my life. It would not be consistent if I didn’t want others to at least hear about it.” According to Pastor So, not talking to his neighbors about Christianity would be like making new friends but not mentioning his wife and children to them.1

Proclaim the Gospel at all times, Pastor So might say, and do it as an authentic, whole person, through words and actions. Care for the least of these and make disciples. Name the name of Jesus.

If we truly believe that the Gospel of Jesus Christ is good news for the whole world, then we need to share that good news, not coercively but in authentic, day-to-day relationships, caring for the whole person, body and soul. We need to witness to what God in Christ has done for us, “so that,” as the Epistle lesson for this festival day, says, “at the name of Jesus every knee should bend, in heaven and on earth and under the earth, and every tongue should confess that Jesus Christ is Lord, to the glory of God the Father” (Philippians 2:10-11).

May God give us grace to join with full voice in that confession and to invite others to do the same.

1 Julie Zauzmer, “As Donald Trump railed against refugees, a pastor made his life among them,” The Washington Post (Nov. 23, 2016). Online: https://www.washingtonpost.com/news/acts-of-faith/wp/2016/11/23/as-donald-trump-rails-against-refugees-a-pastor-makes-his-life-among-them/