Preaching to (and Caring for) Vets: Memorial Day and Beyond 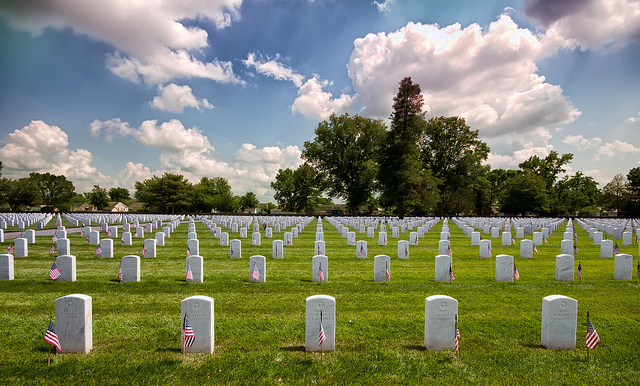 On Monday, May 25, 2015, Americans will celebrate Memorial Day, an annual observance in which we remember those who have died while serving in the military. This commemoration began three years after the Civil War ended. Known then as Decoration Day, it was “a time for the nation to decorate the graves of the war dead with flowers.”1 Following the atrocities of World War I, Decoration Day, as was expanded to honor the memories of those who died in all Americans wars and in 1971 Memorial Day was declared a national holiday to be observed annually on the last Monday of May.

Many churches find ways to mark Memorial Day in some way. While observances range widely, it is not uncommon for preachers to mention it, either in a prayer, a litany, or in their sermon. Some will, regretfully, ignore it altogether. This latter option may be particularly tempting this year, since the Memorial Day weekend coincides with the Day of Pentecost (May 24, 2015). This year, while we mark the birth of the church by the living giving power of the Spirit, we also remember the significant costs of war, the human lives that war claims. I will return to this below. But along with those killed on the battlefields we’ve sent them to, there are at least two other facets of Memorial Day that we should face.

First, we should remember those whose war experience led them to take their own lives after returning home. According to the latest U.S. government data, about 22 veterans commit suicide each day. That’s almost one per hour. Rita Brock, director of the Soul Repair Center at Brite Divinity School, wrote that “[t]o ignore veteran suicides as casualties of war is to abnegate our own moral responsibility for having sent them to fight. It’s also a failure to heed the lessons about the costs of war to our whole society.”3 While recent legislation is aimed at improving the Veteran Administration’s suicide prevention program,4 ministers should remember that the friends and family members left behind by these suicides may be sitting in our pews.

Second, we should also remember those who may struggle with memories of fallen friends, wondering why they survived while others didn’t. In March, 60 Minutes aired a segment on the struggles many veterans face when returning home from combat. One of the most striking interviews was that of Devin Jones, who remembered the death of his friend Dennis Burrow, who was killed by a landmine. When asked by Scott Pelley, “Did you sometimes think you’d like to trade places?” Jones replied, “Every day. Every single day. How do I deserve to be here?”

The anguish that leads some to commit suicide, and the survivor’s guilt experience by veterans like Devon Jones, are symptoms of moral injury, which has been describe as “the pain that results from damage to a person’s moral foundation.”5 Though it shares some symptoms with post-traumatic stress disorder (PTSD), moral injury is caused by what the individual senses as a “violation of what’s right” rather than by a sudden traumatic event.6

The sorrow, grief, shame, alienation felt by many veterans may indeed fill our pews from week to week, with anger and depression filling the gaps between Sundays.

While we memorialize the lives that war has claimed, we must also acknowledge the losses that war takes once veterans return home. At the practical level, we might make this Memorial Day meaningful by taking a little extra time to prepare our congregations and ourselves.

Let us give thanks for those who serve our country, especially for those who have given their lives in the line of duty. But let us also acknowledge those who returned home, alive and well, but feeling empty, numb, even dead, on the inside. And let us call attention to these invisible wounds that affect so many, raising awareness of the need for our congregations to take action to help their recovery.

4 Richard A. Oppel Jr. “Preventing Suicides Among Veterans Is at Center of Bill Passed by Senate,” New York Times, Feb. 3, 2015.

6 Jonathan Shay uses this phrase to describe moral injury, though he did not use the term, in his Achilles in Vietnam.