Sensing the Gospel: A Five-Part Series of Meditations for Lent 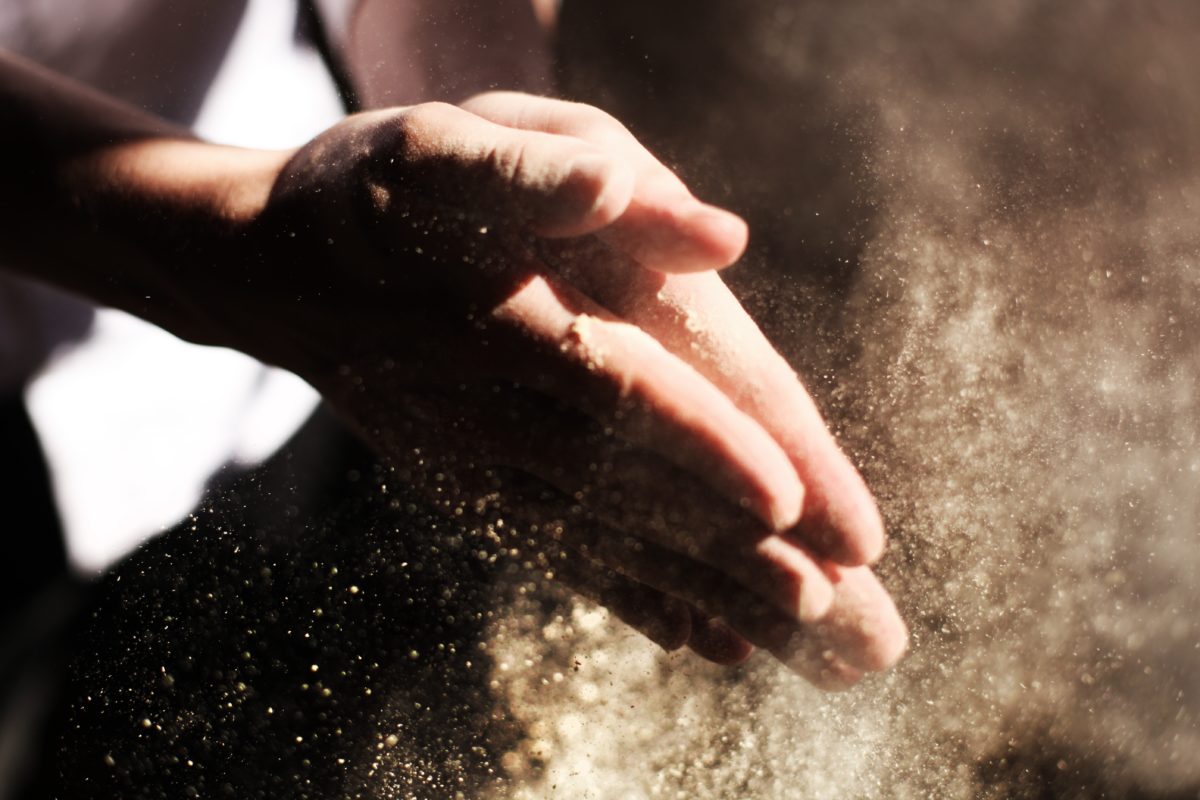 In Jesus Christ, the salvation God provides cannot be reduced to an idea or abstraction. Salvation happens, instead, in human flesh. Indeed, God arrives as human flesh.

Moreover, people encountered Jesus in their own bodies. These were real people in real contact with a real man from Galilee.

Even today, we encounter God and God’s salvation in embodied ways — in our bodies’ abilities to perceive familiar realities and to interpret new ones. Lent provides opportunities to acknowledge this. The season begins with smelly and greasy ash as a stark liturgical reminder of our flesh’s dusty finitude. It will end with our feet washed in cool water or a bittersweet taste of wine in our mouths as we imagine the horrible sight of a man’s body mangled on a cross. In between, Lent allows us to consider together who we are and how we encounter an incarnate God.

For the additional worship services or Bible studies that come your way during Lent, consider a series that invites people to think about Jesus’ ability to make God known in tangible, sensory ways. Explore biblical passages that permit us to reflect on who we are and how we bear witness to the gospel — not so Lent causes us to denigrate this life, but so we learn to encounter God among us and to know Christ through our bodies.

The short commentaries I offer here provide starting points for considering the biblical texts I have chosen for a five-week series during Lent. Listen to the special Lenten Sermon Brainwave podcasts for extended conversations on these passages.

All the action in Luke 7 ceases when Jesus’ hand contacts the bier carrying the son’s corpse. He halts the funeral procession’s somber inertia with his body. Life obstructs death, allowing it to proceed no further. With a touch Jesus inserts himself into the circumstances. He becomes part of a village’s grave ritual and a widow’s departure into an uncertain plight. The Savior physically reckons with death and the destruction it inflicts on survivors. With a touch, he takes over the scene. No one frets about defilement or his risk of contracting impurity; here Jesus commands full control. Palpably, his touch injects life and renewal into desolate conditions.

If you remember watching video footage of Mother Teresa, you may recall how frequently she employed touch as a vital expression of ministry — holding people’s faces, clutching their hands, embracing them without fearing their disease or frailty. With touch she dignified sufferers’ humanity and offered to carry their pain for them. Her touch poked through any boundaries that would keep their bodies isolated from hers.

Several biblical texts speak of a future devoid of grief and suffering. One of the final visions in Revelation picks up on a particular detail found in Isaiah 25:8: God wiping tears from mourning faces. Such a caring action requires a delicate touch to prevent it from inflicting greater damage to a mourner. A God who dabs the tears from our eyes isn’t commending stoicism for all eternity or minimizing the pain anguish causes. God wicks tears away, so their repetitious flow won’t carve permanent grooves into us.

This strange story, which only Mark tells, symbolizes that Gospel’s emphasis on mystery and delayed disclosure. Most people in Mark find Jesus difficult to see in unmistakable light; they cannot grasp his identity or figure out what he wants from them. An ugly execution and a shocking resurrection finally illuminate the character of Jesus’ kingship and the nature of discipleship. Until then, he and his mission remain opaque. It’s not that people lack curiosity or wallow in apathy. Instead, with the exception of an occasional woman with a hemorrhage or a loudly persistent beggar at the edge of Jericho, few can generate much insight about him. They struggle when Jesus clashes with their expectations. If he is to open these confused people’s metaphorical eyes, he will need to remain committed to the task, and to people themselves, for this kind of vision-correction requires time, persistence, and repetition. Mark tells a story about the Christ’s veiling and disclosure, but it’s also a story about a Jesus who never gives up on myopic disciples and who alleviates human suffering whenever it presents itself.

No wonder the Bible often uses sight as a metaphor for faith. Seeing provides a way of situating ourselves in the world. Sight allows us to perceive our wider context and plot our next movements with a measure of confidence. But our eyes also play tricks on us. We cannot observe all dimensions of an object from a single angle of vision. Even a person blessed with keen eyesight still can see only as much as the conditions permit. Likewise, the faith that the Bible commends rarely means we know everything and believe with utter certitude. To see Jesus is to discover he is with us and then to commit our selves to him.

Paul understands sight’s limitations. A defective or foggy mirror permits only limited perspectives, even for those who can boast of the sharpest eyesight. Mature faith likewise remains cognizant of its limitations. Don’t limit the presence of God’s grace only to those realities that you hope to behold one day, “face to face.” We encounter God’s gifts in our ability to detect even subtle traces of salvation here and now.

I’d like to see the expression on the chief steward’s face when he tastes the sample of Jesus’ private reserve to determine whether it will be appropriate for consumption. In this crisis, probably anything better than vinegar will do, for the steward is undoubtedly open to whatever can save his and the bridegroom’s reputations. All at once his fears dissipate, as just one taste of wine tells him: this is the good stuff. And there’s lots of it. This sign, Jesus’ first in John, announces that his time indeed has begun, a time bursting with the flavors of fulfillment and abundance. It says the Messianic feast is now open for seating. But for that to happen, the initial sip has to satisfy the steward’s desperate yet discriminating palate.

Too many people in the world don’t enjoy the luxury of worrying about how their food tastes. Famished people experience any bread as delicious. But taste involves more than delighting a foodie’s sophisticated appetite. A first bite of any food will fuel a body’s anticipation for more, as taste buds respond by sending signals to the salivary glands and stomach. Taste, like its close friend smell, awakens vivid memories of familiar foods, settings, and friendships. To taste something is to test it by comparing it to what we remember from the past, judging whether it is safe to ingest in the present, and determining whether we want more in the future.

The thing about tasting, as 1 Peter notes when it echoes Psalm 34:8, is that it can lead to longing. Having received tastes of God’s goodness, how can we not hunger for more? Life’s joys and pains both can fuel intense cravings for the thing that fully quenches our thirst: the fullness of salvation.

Authority resides in the Son of God’s voice, authority to initiate judgment that results in either life or condemnation. But how can this voice penetrate the ears of dead people? Probably not because of its decibel level but due to its innate ability to accomplish what it says. The eternal Word used this same voice to speak creation into meaningful existence. It summons four-day-dead Lazarus from his tomb (John 11:43). When Jesus discusses judgment in John, he places more emphasis on life than on condemnation. His ministry reverberates with sounds that beckon people toward life and safety, as when sheep respond to the trustworthy timbre of a familiar shepherd (10:4).

Being roused from sleep is almost always a startling experience. A familiar sound — a regular alarm chime, the bark of the neighbor’s dog, a family member speaking your name — makes the experience easier on the body. By contrast, shattered glass or a scream in the night starts the adrenaline flowing. Discipleship involves learning to find familiarity in God’s words, so we respond rightly. Such familiarity creates a kind of harmonious resonance, the result of growing into greater intimacy with God. It does not mean a dismissive attitude toward the divine voice as something tame and predictable.

When Paul draws a connection between hearing and believing, he reminds the saints in Rome about the social or interpersonal nature of Christian faith. Faith means something other than adherence to doctrines. Faith comes from listening to another’s report. Faith comes when people hear God addressing them. Faith implies a communion shared with a communicative, expressive God. Christ still speaks today, through the audible and manifest words of his witnesses, a noisy group that includes among its members the Holy Spirit, the scriptures, and the church.

Things smelled horrible just a few verses ago, when Jesus had people open Lazarus’s tomb (John 11:39). Now a pound of ointment, equal in value to a laborer’s annual salary, spreads its aroma throughout the house. The scent does not mask the death that is coming in just a few chapters but declares the inevitability of Jesus’ demise. Mary pre-anoints a corpse, unleashing a fragrance that is just as wild as her lavish act of devotion. The smell confirms her untamed love for Jesus, a love that brings her so close to him that she massages it into his pores. Soon, on Golgotha and as he is placed in his garden tomb, Jesus’ lifeless body reeking of both trauma and embalming perfumes, will make a statement of its own in declaring God’s resolute love for Mary and the rest of the world.

Some smells permeate everything. Odorized curtains, clothes, and car interiors can preserve stories of recent meals, long hours in a coffee shop, or a furtive cigarette break. Smells get into our heads, too. Our brains process scents in close proximity to our emotion and memory centers, meaning that smells can participate in how we catalog our experiences and respond to what affects us. Smells lure us into restaurants we hadn’t noticed before. Aromas wafting into my window from neighbors’ outdoor grills have been known to trigger urgent desires in me. God’s grace may operate in similar ways.

Paul declares that knowledge of God radiates from Christians like the sweet-smelling incense that enveloped ancient parades to honor gods and military victors. While some in the Roman world would have automatically discredited Paul’s ministry because his experiences of suffering and shame didn’t pass the conventional smell test, Paul inverts the categories: a cross known for the stench of decay and defeat actually becomes the means through which Christ produces the fragrance of life and new creation.