A Thriving Community of Resistance (1 of 3) 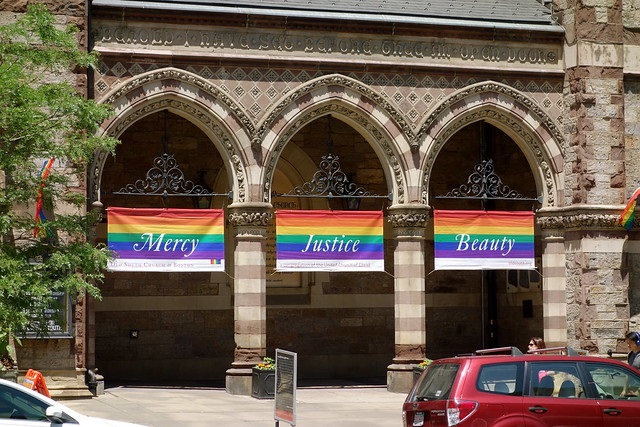 “Liberation is not a catch phrase—but is at the heart of your desire for all people.”
– Pastor Marcus McFaul, Olin T. Binkley Memorial Baptist Church, Chapel Hill, N.C.

A tapestry at the entrance to Olin T. Binkley Memorial Baptist Church in Chapel Hill, North Carolina reads “All are Welcome.” The words are far from church-sign fodder. Named for Dr. Olin T. Binkley, a President of Southeastern Baptist Theological Seminary and the Association of Theological Schools in the United States and Canada, this congregation describes itself as an inclusive fellowship with no hidden barriers. A timeline of Binkley’s 60 years of leadership on issues of race, economics, politics, gender, and theology from its founding in 1958 to the present day is in the lobby.

Binkley chose its first female Chair of Deacons in 1967, affirming the congregation’s support of gender equality. Binkley later ordained and hired a woman as associate minister and adopted gender non-specific language in its church covenant and worship. The 1990’s began with Rev. Linda Jordan as the church’s second Senior Minister. Sunday School classes, sermons, and family group discussions were presented on the Spirituality and Theology of Human Sexuality. Binkley licensed its first openly gay minister, resulting in disassociation from the Southern Baptist Convention. The church conducted Holy Union Services of marriage for church members regardless of sexual orientation. Binkley joined the Alliance of Baptists and the Association of Welcoming and Affirming Baptists. While hosting a Holy Union Ceremony for members of the United Church of Christ, the church was picketed by Westboro Baptist Church.

Over the years, Binkley members tackled issues in education, homelessness, and immigration even before local or state government intervention. The congregation opened a state-approved, private non-profit kindergarten in 1965, 12 years before the state established public kindergartens. Members were instrumental in bringing Habitat for Humanity to Orange County. Binkley’s Church School has supported the integration of immigrants into their community and offered classes for immigrants. The 2019 teen summer camp is called The Exodus, with a theme of Liberation. Binkley practices eco-theology, most tangibly by sorting trash into recycling, landfill, and compost throughout the church building.

Binkley’s intentional design as a community of resistance extends to its worship and proclamation. Sanctuary seating is in the round with the pulpit as part of the circle. This year’s July 4th service was a prayer service for the nation. The call to worship included a responsive reading inspired by Psalm 46 reading in part, “For the distraught and displaced and dismembered in Syria, Palestine, Iraq, Afghanistan and elsewhere; God is a very present help in trouble.”

Pastor Marcus McFaul’s meditation was entitled, “Mend Thine Every Flaw,” taken from the third verse of “O Beautiful for Spacious Skies” by Katherine Lee Bates, and his preaching texts were Psalm 74 and portions of Ephesians 6. McFaul’s meditation lamented the uncivil public life of the nation, declaring the Church’s vested interest in concerning itself with public life because the Church carries with it a vision of human unity. Pastor McFaul spoke of his presence at a gathering in support of Pastor José Chicas who is in sanctuary in Durham, North Carolina.1 After 30 years of ministry and residence in the country, Chicas is in danger of being deported to El Salvador where he would face serious risk to personal safety. Pastor McFaul stated, “Yahweh asks, are you OK with all this violence?” and implored church members to pray not only that God would arise but that the people of God would arise. He drove home the point with a Frederick Douglass quotation: “I prayed for 20 years but I received no answer until I prayed with my legs.”

The meditation was followed by a litany for national concerns, and anyone who wished to pray or ask for prayer stepped up to the microphone. During the offertory, the doxology “Praise God From Whom All Blessings Flow,” is sung and performed in sign language by the entire congregation. The closing hymn was “God of All Peoples, Cultures and Nations,” a 2016 hymn by Carolyn Winfrey Gillette to the tune of “Morning Has Broken.” The fourth verse reads:

How will the ones campaigning to lead us
care for the stranger, outcast and poor?
Will they hear ones who long have been silenced?
Or will they say that wealth matters more?2

The ministries, worship, and proclamation of the Olin T. Binkley Baptist Church make this congregation a model community of resistance.