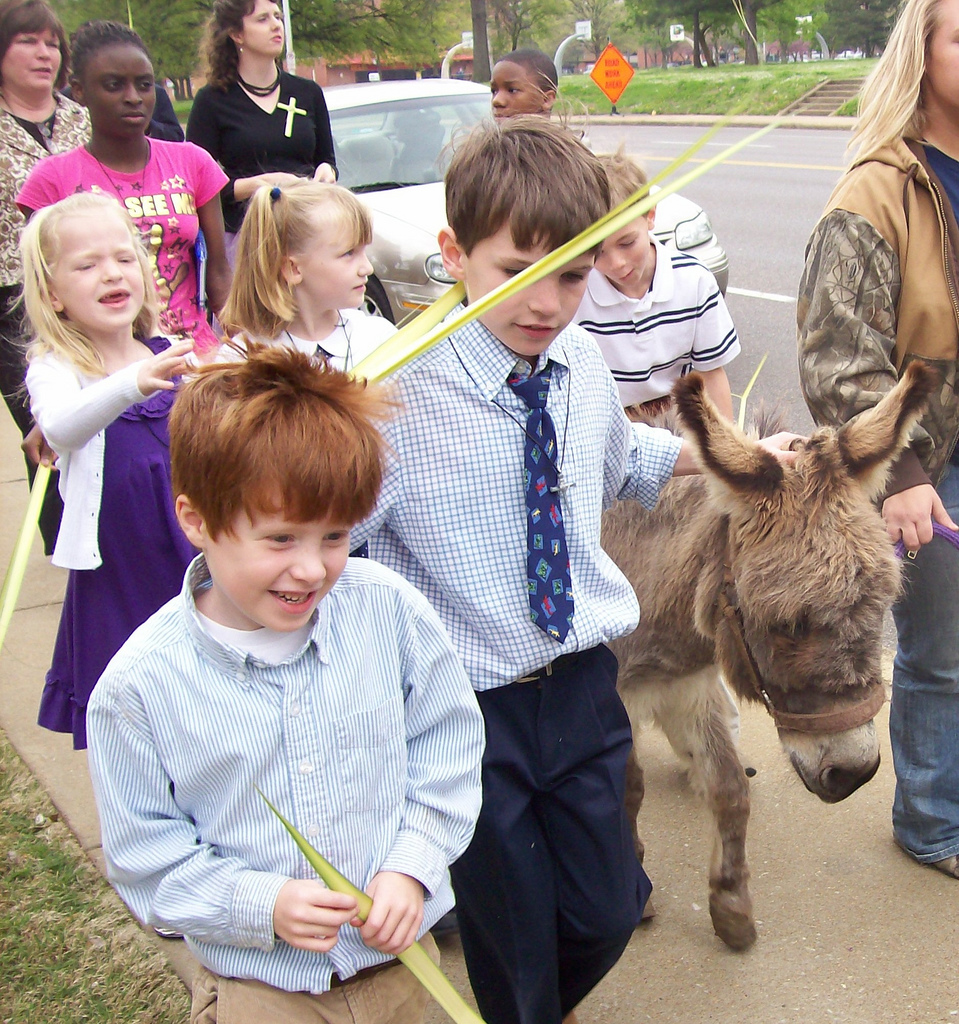 A few years ago I was visiting a congregation in downtown Washington, D.C. on Palm Sunday. It gathers for worship in a historic and challenged urban environment and has a remarkable history of social concern and activism. On Palm Sunday, the tradition of the congregation is to march with palms, not simply around the sanctuary, but around the neighborhood and then return to the sanctuary for the reading the Passion. My initial response to participating in this march around the community was one of excitement. Having just heard the story of Jesus’ entry into the capitol city of Israel accompanied by his faithful disciples and hopeful crowds, I felt a rush of exuberance to be doing the same, lauding Jesus’ name and witnessing to our hope of salvation in him in our own capitol.

At the same time, however, I also felt a bit trivial. It’s a vibrant congregation with two services, but it’s not a large congregation. At the early service in particular our group of marchers was fairly small. The people we passed greatly outnumbered us, and this was fairly early on a Sunday morning! I realize that’s the point — bearing witness to our Lord — but at times I also felt a bit discouraged, even a tad foolish, as our march seemed to make little to no impression. Most folks glanced our way for a moment and then returned their attention to the conversation or cup of coffee they had been enjoying. While a few folks smiled their encouragement, most of those who watched our progress for any length of time looked a tad puzzled, perhaps wondering what we were doing. No one, however, joined our pilgrimage or shouted out “Hosanna.”

I remembered this service while reading Matthew’s account of the triumphal entry, because in his story there are also two groups of people, the crowds witnessing to their faith in Jesus and the “city folk” who are confounded by this procession and ask amid their turmoil and perplexity, “Who is this?”

Who is this? Is this not the question of the day we somewhat confusedly call both Palm Sunday and the Sunday of the Passion? Who is this one hailed by peasants and lepers and cripples and prostitutes and day laborers as messiah? Who is this who, though every inch a country hick and peasant, yet rides into the city like a king? Who is this whose devoted followers soon turn on him, as the disciples disperse, his friend denies, and the crowds accuse? Who is this who is tried by both religious and political elite and found, not just wanting, but also threatening, an enemy to the establishment? Who is this who is dragged through the streets of Jerusalem and hauled to the execution grounds? Who is this who is hung on a cross abandoned and forsaken? Who is this?

Is it little wonder that the city folk are confused? There is nothing about Jesus — his entry into the city, his confrontation with authority, his brutal and lonely death — that would inspire anyone to devotion. He comes not in power but in weakness, not in might but vulnerability, not in judgment but in mercy, not in vengeance but in love. Nothing about him conforms to the expectations of a world that has come to believe above all things that might makes right or, at the very least, that might wins.

And yet Christians have claimed for millennia that in Jesus’ crucifixion we see this assumption called utterly into question. The fatal flaw in the logic of the world is that the cycle of power and influence and might lead only to violence and death. There is no hope in the way of might, no possibility of redemption or victory or defeat of evil through violence. As Martin Luther King Jr., once said, “Darkness cannot drive out darkness; only light can do that. Hate cannot drive out hate; only love can do that.”

This is Jesus, the One we confess died not in order to make it possible for God to love us but rather to demonstrate that God already does love us and that God’s love is our only hope. This is Jesus, the one we proclaim each week as messiah and lord, source of hope and healing. This is Jesus, the paradigm of God’s action in the world, whose story comes to a climax this week in order that our story might begin anew and afresh with the hope and promise of a good ending.

Who is this? It’s not just the question of the day, Working Preacher, it’s the question of the week we call Holy and, truth be told, of the ages. Who is this? Week after week we answer that question in trust and confidence, raising our voice above the din of the culture to speak his name and point to God’s redemption. But perhaps, on this day, perhaps it is enough — and perhaps even better — that we don’t answer the question, but only ask it. Perhaps we might ask this most significant question and then allow our people to ponder, to wonder, and we pray to answer, with the flawed and fickle crowds then and now, that this is Jesus, the prophet of Nazareth, who is also Christ the Lord.

Look, I know at times you feel the exuberance of the office as you are blessed to proclaim God’s saving action in Jesus. And I know that at times you feel trivial, small, perhaps even foolish as you wonder whether your witness makes any difference, as the crowds of your day seem barely to take notice.

But here’s the thing, Working Preacher: Given that we follow a crucified Messiah, can we expect much different? So keep in mind, I pray, that what you do matters! And while you may not realize it amid the planning and preparation for all the services just ahead, there are many who will be touched by your words, granted a measure of faith, and see the glory of God revealed in the form of this broken and triumphant man. Thank you. Even more, thank God for you. Blessed Holy Week.