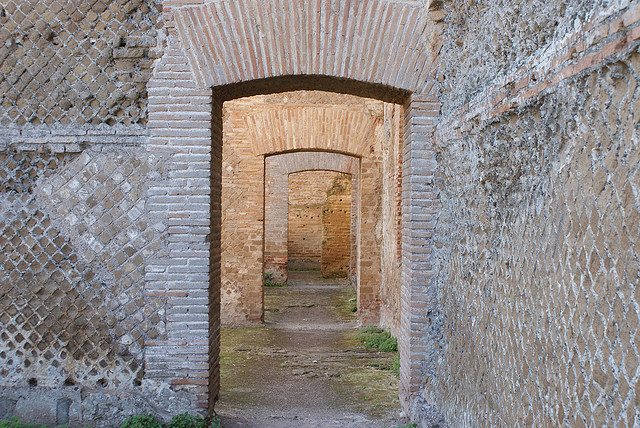 Kardo and Decumanus(Creative Commons image by Jon Cox on flickr)

At our annual Celebration of Biblical Preaching in October 2011, Walter Brueggemann suggested that the primary challenge facing the Christian Church in North America in the 21st century is that for most of our people, God is no longer a primary actor in the story of their lives. Don’t get me (or Walter!) wrong: it’s not that our people don’t believe in God, it’s just that apart from church they don’t think about God all that much.

More than that, the biblical story – the narrative, that is, that teaches us to recognize God’s activity in the world – is relatively and increasingly unfamiliar to them and certainly not a source of the kinds of stories we regularly tell and share as we seek to make sense of our lives. In light of this, I’d suggest that this week’s familiar reading about Thomas’ encounter with the Risen Christ provides the perfect opportunity to reverse this alarming trend.

First, a word or two of explanation. Given that we preach these stories week in and week out, how is it that our people – or we ourselves, for that matter! – rarely reference them in ordinary conversation or activity?

My hunch is that most of our folks see the biblical stories as the history of what God did long ago, but they don’t see them as connecting to our real lives in a tangible way. Not that anyone would say that out loud, of course, as we’ve been trained to believe and repeat that the Bible is a very, very important book (which is why, of course, we are so embarrassed about how poorly we know it!).

But, quite frankly, the stories are just odd enough, just unusual enough, and just foreign enough to our day-to-day experience that we don’t pretend to understand them let alone feel confident at connecting them to our daily lives. Moreover, precisely because we – trained experts in interpreting and proclaiming the Scriptures – have done such a good job in preaching these stories week in and week out, our people have had little occasion to try to make sense of them themselves and, indeed, may be intimidated by the prospect of following our example.

So what can we do? I’d suggest two things, both stemming from today’s reading from John about Thomas. First, remind our folks that the gospel writers themselves did not imagine they were telling stories about things that happened in the past. Rather, they were making what they believed were revolutionary claims that they hoped would shape the immediate present and future of everyone who read them. So at the close of today’s reading, for instance, we hear John confess that while he could have shared many other stories about Jesus, he chose these particular stories because he hoped that everyone who heard them would actively believe that Jesus is God’s messiah, the savior of the world.

John, in other words, is inviting us into the story, inviting us to make this story our story. This becomes most clear at several points in the Gospel, as John opens what I would call a little door through which he beckons us to enter the story. The last two verses of this passage are one of those little doors, as John comes clean that he offers no neutral or objective account but actually writes hoping to persuade, prompt, and provoke us to living faith.

A few chapters earlier, John offers another of those doors. I’m thinking of the “high priestly prayer” where Jesus prays for his disciples, asking God’s care and protection for them especially after he has gone. About two thirds of the way through this lengthy prayer, Jesus says, “I ask not only on behalf of these, but also on behalf of those who will believe in me through their word.” I get a tingle of excitement each time I read those words because I realize that this petition reaches across the millennia to include us. After all, we are some of those who have believed because of the word these original disciples preached, and each time we read this passage we actually get to hear Jesus praying, all those centuries ago, for us! Do you see what I mean? These are brief episodes in the story where the curtain is pulled aside, the doorway opened, and we are invited not just to sit back and listen to the story but actually to jump in and make it our own.

In Jesus’ encounter with Thomas another one of these doorways into the story opens up in front of us. Near the end of this scene, immediately after Jesus has shown his wounds to Thomas, and Thomas, in turn, has made the great confession of John’s Gospel, Jesus says, “Have you believed because you have seen me? Blessed are those who have not seen and yet have come to believe.”

For most of my life I have assumed that Jesus was rebuking Thomas. Which, quite frankly, always struck me as a little harsh, since Thomas only asked for what everyone else had received. A few years ago, however, it occurred to me that this might be another one of those doors, a place where the story opens up and invites us to realize that we are already standing smack in the middle of the story. I mean, think about it: who are those who have believed without seeing Jesus? Well, likely some were the members of John’s community for whom he wrote. But guess what – we’re included in that group, too. We, also, have believed and struggle to continue believing without ever seeing with our eyes or touching with our hands. And so now I think it’s not so much that Jesus is rebuking Thomas as he is blessing us. What a cool door into the story.

So tell your people that, Working Preacher, that this is a never-ending story that started with creation and continues up to our own day and, indeed, to the end of time, and that we are all characters in it, invited to learn from the faith and fear, courage and mistakes of those who have come before, but now invited also to get involved, participating in God’s ongoing work to save and bless all the world.

I mentioned there were two things we can do to engage our people more deeply in the present-tense character of the biblical story. Here’s the second: recently I’ve been working with a dozen congregations around the country on cultivating more participatory, engaging preaching. One of the simple but powerful things we discovered was that if congregation members have a chance to read the passage being preached on sometime during the week before the sermon, they engage and remember the sermon more fully. And if they are invited to think about that passage by pondering two simple questions the level of their engagement skyrockets.

So here’s what I’m proposing: We’ll be in the Gospel of John in the RCL for the next eight weeks. For each of these weeks, I will offer two simple questions and suggest that you print the gospel reading along with these two question in the bulletin and/or send them to your congregational email list, asking them to take just four or five minutes during their week to read the passage and ponder the questions.

I’ll start with two questions for this week’s reading in case you have time to send them out yet this week, but I’ll also write two for next week’s gospel reading about Jesus and Peter in John 21. (And of course feel free to edit them or write your own – these are just suggestions.) It will be interesting, I think, for all of us to see what happens as over the next two months we invite people to engage the Scripture more deeply such that we all read and believe this story not as distant history but rather as the story of our lives.

Thanks for your good work, Working Preacher. I hope you had a blessed Easter, that you get a chance this week to catch your breath, and in your study and prayer you discover new inspiration for the coming year. We need your work and fidelity because what you do really matters. Easter blessings on your week and work.