Taking Refuge in the Goodness of God 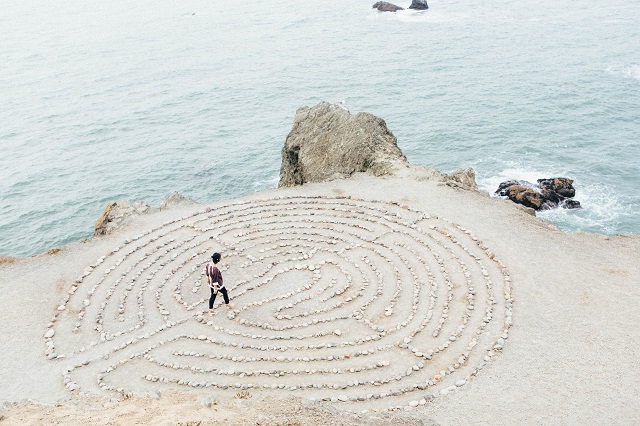 Photo by Ashley Batz on Unsplash; licensed under CC0.

The term “refuge” rings uniquely true in today’s world. Under orders to “shelter in place,” many of us are reconfiguring our domiciles to be fortresses against an unseen but deadly foe: COVID-19. Armed with masks and disinfectant, we raise the drawbridge and fortify our homes in a society-wide attempt to “flatten the curve.”

This week’s readings also deal with the topic of refuge. For the psalmist, God is a “refuge” (ma’oz) from danger (Psalm 31:2, 4), and John’s Jesus offers heavenly shelter for his disciples troubled hearts, promising to prepare for them a heavenly home (John 14:1). In Acts 7:55-60, the martyr Stephen takes refuge in a glorious vision of the heavens, even while he is being stoned to death. And in 1 Peter 2:11, the reader is urged to seek shelter in restraint … from the “desires of the flesh that wage war against the soul” (1 Peter 2:11).

Today’s texts remind us that to live on this earth is to live in a war zone. Nobody says it better than Martin Luther himself, whose own times were also afflicted by pandemics and plagues:

And though this world, with devils filled,
Should threaten to undo us,
We will not fear, for God hath willed
His truth to triumph through us:
The Prince of Darkness grim,
We tremble not for him;
His rage we can endure,
For lo! his doom is sure,
One little word shall fell him.

As the current pandemic makes clear, some members of our society struggle to “endure” the rage of the pandemic more than others. Part of our struggle against COVID-19 is to acknowledge and address the needs of those who are particularly vulnerable to the virus’ cruel consequences. Now is a time to honor the fifth commandment, which Luther interprets in the following way: “We should fear and love God so that we do not hurt or harm our neighbor in his body, but help and support him in every physical need.” We shelter in place and socially isolate for important reasons, not only for our own health but also for the health of others.

This week’s texts could not be more timely. In this moment of heightened anxiety, it is important to remember that true peace, the peace of the Gospel, does not come from our attempts to protect ourselves from earthly harm. No leader, vaccine, or test can truly bring peace. These are important and necessary measures for the flourishing of life in this world, as Luther makes clear above, but they do not bring the peace of Christ.

The peace described variously in this week’s texts does not depend upon a calm storm, the end of adverse conditions, or the removal of distress. To the contrary, the peace of God holds us safely, even while we are “beset as a city under siege” (Psalm 31:21) or suffering from the lashings of “contentious tongues” (verse 20). The psalmist invites us to trust because we know that “my times are in your hands” (verse 15). This is not merely resignation to fate. It is a deep trust in the goodness of God, even when God’s goodness is hidden or obscure.

In John 14, Jesus addresses his troubled disciples and calls upon them to “believe in God” (John 14:1), whose love and works they have concretely seen in the person of Jesus: “Believe me that I am in the Father and the Father is in me; but if you do not, then believe me because of the works themselves” (John 14:11). But Jesus makes the command exceedingly difficult, especially for Peter. Immediately prior to Chapter 14, Jesus informs Peter that he would deny Jesus three times (John 13:36-38). With the weight of this news on Peter’s shoulders, Jesus tells his disciples not to be troubled, but instead to “believe in God, believe also in me” (John 14:1). Jesus calls the disciples to find peace in his trustworthiness, despite the building storm clouds.

Stephen, similarly, finds peace in the thick of persecution. Immediately following Stephen’s sermon, the crowd becomes enraged, drags him outside the city and begins to stone him (Acts 7:54-58). In between the bone breaking blows of his assailants, Stephen sees Jesus at the right hand of God and testifies to his vision (verse 56). Just before death, Stephen commits his Spirit to Jesus and then, in a sign that the Spirit of Christ fills him, ask that God “not hold this sin against them” (verses 59-60; see also Luke 23:34). Stephen finds peace in knowing that the resurrected Jesus sees his suffering, is enthroned on high, and will soon receive him into his heavenly court. At the peak of adversity, Stephen receives the gift of peace—Jesus himself, resurrected and glorified.

O how abundant is your goodness
that you have laid up for those who fear you,
and accomplished for those who take refuge in you,
in the sight of everyone!
In the shelter of your presence you hide them
from human plots;
you hold them safe under your shelter
from contentious tongues (Psalm 31:19-21).

Blessings to you this week, Working Preachers, as you proclaim this word of refuge to your people. They need it more than ever.