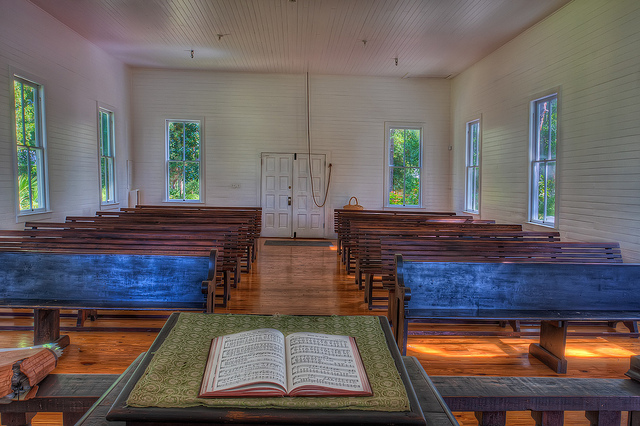 From the Pulpit(Creative Commons Image by Matthew Paulson on Flickr)

There is no end to power’s deception and corruption.

While we don’t need the Bible to corroborate that statement, we seem rather content when it does. The levels of power gone awry narrated in the gospel lesson this Sunday from Mark could be a soap opera or primetime television show at its best. If you need to find an illustration for this passage so as to “bring the sermon home,” well, then the dimensions of human brokenness manifested in Mark 6 have not been fully appreciated.

When power usurps mercy. When power demands drama. When power manipulates and connives and only looks out for the self? Well, there is power in its most destructive form.

Given the issues of these last weeks in our world, this story from Mark has now become one of those texts that on Sermon Brainwave we say, if you are not preaching on it, you can’t read it out loud. Why? Because it’s all about power misused. And the wielding of power for the purpose of destruction has been more than potent lately. Damaging. Demoralizing. Debilitating. Demeaning. Desecrating. Discriminating. You can’t read the story of John’s beheading and then preach a sermon on another supposedly safer text. Because the story of John’s death is power at its worst. And this is the kind of power that has to be called out from the pulpit.

Why? Because we all have the potential to dismiss the origin of destructive power — a lack of recognizing one’s starting point. Where you start determines your end.  What controls you?  Domination or dignity? Self-service or true service to the other? Self-protection or honor? For Herod? He starts from self-preservation. For Herodias? Pleasing the other. For the mother? Who knows. And that’s scary. There’s the rub — the starting point of your power matters. Because look where they all end up.

If you cannot articulate the seat of your power, that you have it, that you know what to do with it, then your power will have the potential to disempower. If you do not know the starting place of your power — and whether or not it comes from love and dignity and honor and glory — then abuse of power is just around the corner. And a letter of call is no justification for yielding power unchecked.

Serious talk about power and how it’s used and misused? Well, my hunch is that it would be welcomed from the pulpit — a place of assumed power talking about power in ways that might even call into question your own. Power potentials on multiple levels.

This becomes the litmus test for power, does it not? When power’s starting point is money, the bottom line, rules, control, competition, manipulation? That’s not power. That’s bullying. That’s abuse. That’s nothing else than one getting one’s way.  That’s force. That’s coercion. That’s narcissism. And that kind of power leads to a head on a platter.

A rather grotesque image, yet, if we are honest, full of truth. How many times have you felt like your head has been served on a platter as the result of all of the above? That what you stand for, what you believe, your thoughts, your ideas, your aspirations, your truth, your sense of justice, your commitment to mercy, your dedication to preaching the truth of the Gospel, rather than celebrated is objectified on a silver serving dish for the world’s mocking?

We are simultaneously drawn to and repulsed by power. And that convergence, or juxtaposition, if you will, is worth some contemplation this week. These past weeks have indicated that there is no lack of illustrations to help us negotiate and contemplate this issue of power and I trust deeply that you will know what specific concretization to bring to your sermon for your people. People wonder about power, want it, misunderstand it, have been the recipients of its generosity and the objects of its negativity. It takes a biblical imagination, it will take you, to offer an alternative and corrective, to be a conversation partner about the nature of power for the sake of providing something different than the world, to invite an alternative way of thinking about power so as to prevent it from being the one-sided perception it is now.

And this, my friends, is the kind of power that will truly save the world.