Out of Our Forts, into the World 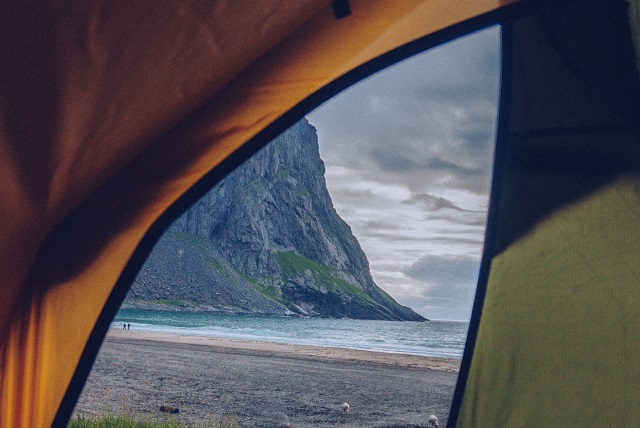 Photo by Martine Jacobsen on Unsplash; licensed under CC0.

How are you? I stopped and prayed for you as I wrote this piece—you who get up to preach the Gospel week in and week out to a weary world. And oh, how weary we are. Thank you for your commitment to your calling.

I’ve read that children have been doubling down on fort-building during the pandemic, draping quilts over furniture, absconding with all the household’s pillows, and swaddling themselves in the cozy, dark spaces.

While this trend is partly a function of needing something to do while stuck in the house, forts also make spaces of safety and control in the midst of anxiety and uncertainty. So many forts were built in my house early on during the shutdown that we finally invested in a small indoor tent—purple with a unicorn motif—in hopes of keeping the dining chairs at the table for meals.

Jesus needs a fort this week, I think.

As we saw in last week’s Gospel reading, Jesus, having heard news of the gruesome murder of the man who baptized him, tries to get some time alone with his grief. But large crowds trail him, desperate for his healing, and so he attends to their illnesses and their hunger. This week, Jesus tries again for some alone time. He sends away the crowds and the disciples and goes up the mountain alone to pray.

Three Gospels include versions of this story: Matthew, Mark, and John. In each of them, Jesus has been alone on the mountain, and the disciples are in a boat on the sea. A storm blows in, Jesus walks on the water toward the boat, and the disciples are terrified. Jesus identifies himself and tells them not to fear. However, the episode with Peter is not in Mark or Luke’s versions of this story, only Matthew’s.

To be honest, I much prefer Mark’s account: “When he saw that they were straining at the oars against an adverse wind, he came towards them early in the morning, walking on the sea. He intended to pass them by” (Mark 6:48). What?! Jesus strolls on the water, spots the disciples struggling in the boat, and wants to just walk right by them, leaving them to fight the waves while he waits for them, still blessedly alone, on the other side.

Have you ever done that—spotted someone across a room or in the next aisle at the grocery store and just kept on walking, only to have them call out to you just when you thought you were getting away? Mark’s Jesus seems to hope he can slip by unnoticed for just a little while longer. And no wonder, as Jesus will again be mobbed by crowds when his feet touch land again, with people hauling their sick to him for a miracle, hoping that just brushing their fingers against his cloak will bring them new life.

Of course, I am sure I am projecting at least some of my pandemic weariness onto my reading of Jesus; I may or may not have retreated to the upstairs storage closet for a little peace and quiet several times since March, having no unicorn tent of my own.

When I stop to think about where I “see myself” in this story, it’s certainly not as Jesus, tired though I may be, and it’s not even as the terrified disciples. I identify with those crowds who want a little touch of that hope that Jesus offers, and maybe you do, too, Working Preacher. I want to bring the sick—so many sick—directly to Jesus for healing. I am clamoring for deliverance from the disease, the fear, the isolation, the deprivation, the grief—all that the pandemic has wrought.

While Mark’s Jesus may have tried to make his way across the sea alone, as soon as the disciples cry out in fear, he attends to them: “But immediately he spoke to them and said, ‘Take heart, it is I; do not be afraid’” (Mark 6:50). The immediacy of Jesus’ response to the disciples’ cries of terror is also in recorded in Matthew 14:26-27, and when Peter cries out as he begins to sink below the waves, “Jesus immediately reached out his hand and caught him” (Matthew 14:31). He never fails to heed the cries of those who call to him, even when he has sought to be alone.

At the Transfiguration (Matthew 17:1-8), a once-again-terrified Peter (this time he’s in all the accounts: Matthew, Mark, and Luke) will offer to build some tents for Moses, Elijah, and Jesus up on a mountain. That will be the wrong thing for him to say; Peter is good at finding the wrong response, as this week’s lesson from Matthew affirms.

Jesus doesn’t stay on the mountain, or in the tent, or in a blanket fort, even though he no doubt really wants to sometimes. Jesus strolls across the sea and out into the world. He shows compassion for the sick and the poor, hangs out with sinners and misfits, and acts with sacrificial love in life and ultimately in death.

Jesus also calls us out of our forts of security and calm and into the messy business of living out justice and mercy in the world. That is as true now as it was before the pandemic. Of course, “going out to the world” looks different now—we make connections over Zoom, or several feet apart in backyards and on patios. We preach on livestreams, and we wear masks wherever we go.

We are not called to recklessness, but neither are we called to hopelessness. Take a little time in the unicorn tent this week, Working Preacher, but don’t stay there too long. There is much to do.