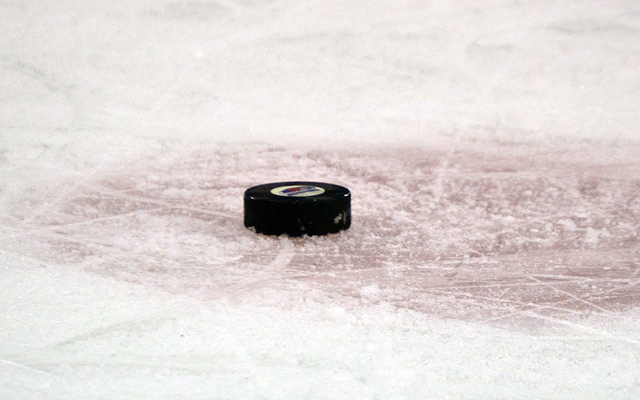 Full disclosure. I do not like hockey, I really, really don’t. This coming from a Minnesota resident whose 13-year-old son is a big-time hockey player. My reason? I am a native Californian. Need more reasons? I don’t get it. I’m not a big sports fan. And then there’s this: I just think that if it takes 45 minutes to put stuff on your body to protect yourself from serious injury, well, maybe that’s something you should not be doing in the first place. Also, being in the warming room, locker room, whatever you want to call it, helping my son get on the gear and lace up the skates, here’s the thing, there’s simply not enough deodorant in the world to make that smell go away. And then after the game, the gear and the boy get in my car.

What am I doing here? I don’t like hockey. I’m freezing my you-know-what off even in an indoor ice rink and not even my venti nonfat no-foam latte from Starbucks can help.

But there I am. As many games as I can attend, swearing I would never do this, but screaming with the rest of parents, “Get in there, Stellan! Go for the puck! Ice it!” like my son could even hear me. And like I even know what I am saying.

And here’s the weird thing. I am actually now watching the games and getting some things. And I’ve started to realize, “Wow, this is a really hard sport. This takes a lot of skill. It’s a fight for the puck at every turn. For all intents and purposes, this is exciting!”

Yet, at the same time, I’m watching my son’s head hit the ice, a lot of very sharp skates coming dangerously close to his face, and wondering if the gear that took 45 minutes to put on will really protect him. Really. And I think concussions. And CTE (chronic traumatic encephalopathy). And bodychecking next year.

What am I doing here?

This is the question you ask when you are called back to yourself.

You see, hockey reminds me who I am. Yes. I am a preacher, a teacher of preachers. A scholar. An author. A theologian. And I spend a lot of time doing and being all of those things. And maybe too much time. Because I am also a mom.

What am I doing here? Maybe this was the question Simon’s mother-in-law asked when she first realized she was healed.

The healing of Simon’s mother-in-law is a classic healing story. It’s all fine and good. It’s what Jesus does. It’s what he’s good at. But there is something sort of disturbing about this story that doesn’t seem to have anything to do with healing. “Then the fever left her, and she began to serve them.”

But, what if the healing of Simon’s mother-in-law was bringing her back to be the mother she always was and that she always wanted to be? And in being brought back to who she was, she became a disciple, called to minister, to serve, like the angels did for Jesus in the wilderness and like the Son of Man, who did not come to be served but to serve?

Have you ever felt like God has brought you back from the brink … to yourself? That you were called back from a place that was not fully you, to be you?

Jesus lifted her up. What if resurrection is being raised up to be who you always were and were always meant to be? That it won’t be hilltop houses, driving 15 cars or bathrooms you can play baseball in (“Rockstar,” Nickelback) but the radical, emotional, incredible feeling of being you. That being raised up is not just some sort of spiritual future but your present reality, here and now, to live you. Your mind, spirit, body, everything together, everything that you were always meant to be. The story of Simon’s mother-in-law tells us that God does not call us to be something we are not but is in the business of restoring us to who we really are.

Of course, most of the time it’s easier to live on the brink, to surround yourself with people and projects and performances that allow you to pretend this is you, that let you avoid the feelings and frustrations and fears that come with acknowledging what is important in your life. It is so hard to live who you are. To paraphrase one of my favorite quotes, “The world is full of people who will go through their whole lives and not actually live one day. I do not intend on being one of them.”

I think a lot of us spend a good part of our lives living on the periphery of ourselves.

The healing of Simon’s mother-in-law (and I so wish she had a name) is God being, living who God is. God called Jesus to be who he was. That’s what the incarnation is all about. Jesus didn’t go around pretending to be something that he wasn’t. “Please, please, let this cup pass. My God, my God, why have you forsaken ME?” are not laments about what should be but the truth about what is.

Being human is to what God committed God’s self and therefore, being who we are is what God wants us to be. God brings us back from the brinks of our lives, from despair, from disease, from desperation, to live. Because then, maybe, we will actually know, feel, and get that we are a part, that God needs us to be a part, of what’s at stake for God when God decided to become one of us.

Jesus will take you by the hand. God will raise you up. When you are brought back from the edge, from the brink, your question will be that of Simon’s mother-in-law, “What am I doing here?” What will your answer be? “I am ______.” That’s who God wants me to be. This is who I am.