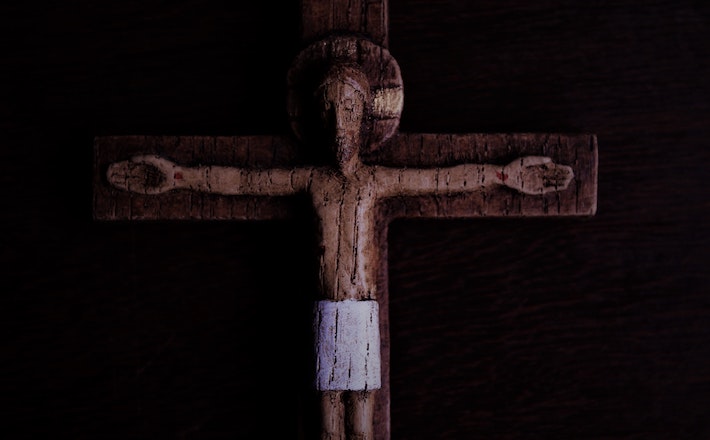 Photo by Rui Silva sj on Unsplash; licensed under CC0.

We approach Passion/Palm Sunday with a long season of suffering behind us.

Reflecting on Jesus’ passion at this point in our nation’s history might be the last thing that any of us want to do, especially in light of the many other “passion” narratives our collective ears and hearts have been forced to ingest—George Floyd, Ahmaud Arbery, Breonna Taylor, COVID-19 victims, and just last week the victims of shootings in Atlanta.

The words of this week’s psalm are tragically pertinent:

my eye wastes away from grief,
my soul and body also.
For my life is spent with sorrow,
and my years with sighing;
my strength fails because of my misery,
and my bones waste away (Psalm 31:9-10).

There are too many among us whose strength fails and whose bones waste away, not because of disease but because of “grief,” “sorrow,” and “misery.” The infection currently afflicting the body politic migrates over into our actual bodies, which break down under the cruel and relentless assault of sin, death, and the devil.

And yet the Passion/Palm Sunday liturgy invites us to turn our eyes upon Jesus’ passion, and to meditate upon this “man of suffering” who is “acquainted with infirmity” (Isaiah 53:3).

From one angle, Jesus’ suffering is unremarkable. He is but one among an innumerable host of bodies pulverized by the cruel machinery of human violence. The reasons for his suffering are all too recognizable, even two millennia later: betrayal, abandonment, arrest under false charges, unfair justice system, physical abuse, and mob “justice.”

But for Mark, Jesus is not only a victim. Jesus’ death was an apocalyptic occurrence. The Greek word, apocalupsis, simply means “revelation.” The suffering of Jesus was revelatory in several ways. It exposed things around him for what they really were, starting with his closest relationships. Jesus’ disciples and friends were unable to stick with their teacher in his hour of greatest need. His suffering revealed the fragility of his friends’ loyalty and courage. His death also exposed the profound cruelty of those with social and governmental power. In Jesus’ suffering we can see the dangerous synergy that can occur between corrupt state power and “mob” justice. The trial of Jesus exposed how the legal system of the time could be manipulated to serve corrupt interests.

To a small number of people Jesus’ suffering also revealed his messianic identity. The woman who anointed Jesus with expensive perfume recognized Jesus coming death in a way that nobody else in the room could (Mark 14:1-9). And when Jesus took his last breath, an unnamed Roman centurion puts everything together: “Truly, this was the Son of God!” (15:39). Jesus’ messianic identity only became apparent at the moment of his death and to the most unlikely of people. It is humbling to realize that most of Jesus’ contemporaries were unable to comprehend his messianic mission, even when Jesus stated his messianic identity explicitly (14:62).

But Jesus’ death was also apocalyptic in another way. It marked a new chapter in God’s redemptive drama. This turning of the page is felt in the darkening of the sky (Mark 15:33; see also Mark 13:24-25) and the rending of the temple curtain (15:37-38). The inbreaking apocalyptic age is also apparent in the calendrical context of Mark 11-16. Jesus’ passion week takes place over eight days (10th of Nisan to 17th of Nisan), including Passover itself (Mark 14:1). This chronological setting makes the exodus an important theological and literary backdrop for the story. When darkness falls across the land in Mark 15:33, for instance, one is reminded of the plague of darkness (Exodus 10:21-39) followed by the death of the firstborn in Egypt (Exodus 11:1—13:16). The upshot is that Jesus’ own suffering is part of a larger story of apocalyptic liberation, effected in this case by the death of the divine Son rather than the firstborn of Egypt.

As we reflect on our own “present evil age” (Galatians 1:4), it becomes readily apparent that we are still waiting for the Son of Man to “arrive on the clouds with great power and glory” (Mark 13:26; see Mark 14:62). Jesus’ ancient command to “keep awake” (13:37) remains pertinent. But the absence of Christ’s glory does not mean that we are left without God’s power. In this apocalyptic age, power appears to us in the form of weakness, and the gift of healing comes wrapped in the garbs of suffering.

The Passion of Christ in the Gospel of Mark makes the strange and mysterious claim that the spilled blood of Jesus contains the gift of a new covenant (Mark 14:24). As we pivot from Lent to Holy Week, we set down our Lenten crosses and direct our gaze at the cross of Christ, where we find the clearest expression of God’s love, compassion, and hope for the world.