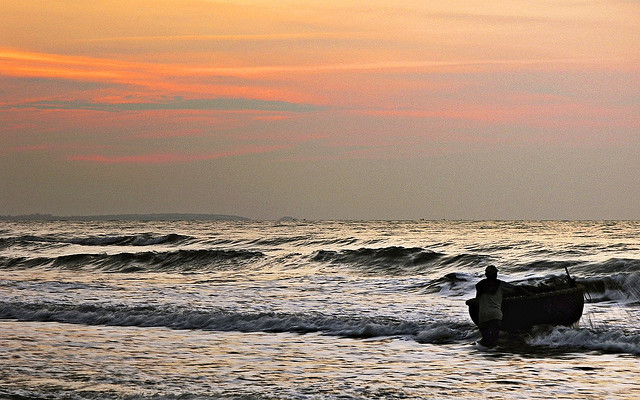 My theme in a nutshell: Jesus called ordinary people right in the middle of their ordinary lives to do extraordinary things … and he still does.

Sound familiar? I hope so, as I’ve written on this topic before. Three years ago, in fact, on just this passage, and while I don’t expect you to remember that particular letter, I suspect that you’ll recognize this theme as a persistent one in my writing. I suppose I should be embarrassed by this fact — that I keep writing about the same thing — but I think some things bear repetition.

Here’s why: In the research leading up to a grant on Christian vocation funded by the Lilly Endowment, a team of folks with whom I was fortunate to work discovered two perplexing things. 1) Graduates of the five institutions involved (Catholic Theological Union, Duke Divinity School, Fuller Seminary, Princeton Seminary, and Luther Seminary) all reported that “vocation” was a significant category in their teaching and preaching. Not all that perplexing, you might say; and I’d agree — this was all to the good! 2) At the same time, however, it turned out that most members of the congregations they serve don’t feel called. Most of the folks listening to our preaching and teaching on vocation, that is, don’t see most of what they do outside of the church as worthy of God’s attention and interest.

How can that be? One possibility is that in our teaching on vocation we have overly emphasized work as a — and perhaps the — primary place of vocation. We have, that is, all too often equated “vocation” with “occupation.” In fact, in a survey conducted by one the members of our research team, we discovered that clergy tend to greatly overestimate the amount of satisfaction, meaning, and purpose that their people derive from their work. Why? Probably because we religious professionals actually do derive significant satisfaction, purpose, and meaning from our work. For most of our folks, however, work is, well, work, with moments of meaning and purpose but often devoid of significant connection to whom they really believe themselves to be and to the rest of their lives.

Where do our people find the greatest sense of fulfillment, meaning, and purpose (terms to which our survey respondents resonated far more strongly that “vocation” or “calling,” by the way)? Relationships. Even those who identified their work as a source of meaning and fulfillment usually cited their relationships at work as the places of particular significance.

All of which highlights one particular phrase in today’s Gospel reading: “Follow me, and I will make you fishers of people.” (I prefer “fishers of…” to “fish for” because it focuses on identity rather than function.) Not “emissaries of the kingdom” or “heralds of God” or “disciples of the Messiah” or “witnesses of the divine” or even “the first Christians,” but rather fishers of people. All of those other things may have been implied or may eventually come to be, but what strikes me is that Jesus is calling these first disciples not into work but into relationship.

And perhaps that’s one of the great challenges to our present preaching and teaching about vocation: we have too often stressed the arenas in which we exercise our vocation — historically, we talk about government, family, and church — or emphasized the roles we play as employees, employers, parents, citizens, volunteers, and the like, rather than emphasize the concrete relationships in which we are involved and the actual persons with whom we are in relationship.

Don’t get me wrong — concern about arenas (or stations, as some theologians have described it) and roles is valuable. But in our contemporary context it may be that we have forgotten, or at least underplayed, the highly relational nature of vocation as articulated by Martin Luther and other reformers. All those roles we play and all those stations appointed by God, after all, are furnished in order to care for our neighbors, both those people who happen to be all around us and especially those who are in need.

Part of the challenge of a passage like this is that it is so difficult for most of our people to imagine getting up and leaving everyone and everything they know to follow Jesus. And so we figure the disciples were extraordinary, first-century super heroes of the faith that we can admire but not identify with.

One way to deal with that, I suppose, is to follow some contemporary biblical scholars who insist that Jesus had actually been living in Capernaum for a while and had known Peter, Andrew, James, and John for some time, and so this call was neither sudden nor abrupt but was the natural outcome of their friendship. Maybe that was the case (huge emphasis on “maybe”), but given that Matthew reports that when Jesus comes and calls they immediately follow, I think we are meant to take notice.

So rather than downplay the import and narrative flow of the text, perhaps we might re-imagine just what it is that Jesus is calling these first disciples to be and do: fishers of people. And that implies relationships. Jesus, that is, calls these first disciples into relationship — with himself, with each other, and with all the various people they will meet over the next few years and, indeed, the rest of their lives. This Gospel ends, keep in mind, with another invitation to relationship: make disciples by baptizing them (into the name of the relational God, by the way) and teaching them what Jesus had taught them.

Jesus issues the same call to us — to be in genuine and real relationships with the people around us, and to be in those relationships the way Jesus was and is in relationship with his disciples and with us: bearing each other’s burdens, caring for each other and especially the vulnerable, holding onto each other through thick and thin, always with the hope and promise of God’s abundant grace. Sometimes that call — to be in Christ-shaped relationship with others — will take us far from home and sometimes it will take shape in and among the persons right around us. But it will always involves persons — not simply a mission or a ministry or a movement, but actual, flesh-and-blood persons.

So maybe I should re-state with the theme I started with this way: Jesus called ordinary people right in the middle of their ordinary lives to be in relationship with the ordinary people all around them and through that did extraordinary things … and he still does.

With that in mind, here’s my suggestion this week, Working Preacher. After helping your people to imagine the call of the disciples differently — relationally — and after inviting them to imagine that God is also calling them to be fishers of people, why not then ask them to call to mind one person with whom they are in relationship? Perhaps it’s a relationship that brings them particular joy, or sorrow, or frustration, or hope. It doesn’t really matter, just so long as it’s significant. Once they have that person in mind, invite them to take a moment to pray for that person … and to believe that God is using them — your hearers — to make a difference in the life of the person for whom they are praying.

You see, it’s not just that Jesus is just now calling our folks to be fishers of people, but that Jesus has been calling them — and in fact using them — to care for those God loves so much for quite a long time.

I don’t know whether this will redeem “vocation” as a helpful word in our day, Working Preacher, but I’m not sure that’s our primary concern. I am convinced, however, that it will help people imagine and believe that God is already working in them and through them to care for those around them, drawing all of us into deeper, Christ-shaped relationships with those God has placed in our lives. And that, I think, is precisely what it means to be a disciple and fisher of people.

Thanks, as always, for your good work, Working Preacher. Not everyone sees or notices the time, energy, and just plain hard work that you put into your preaching and ministry. But I know that you do and am grateful. More than that, I know that God uses your faith and labor to “catch” people in God’s net of grace and new life. Thank you. Thank God for you.