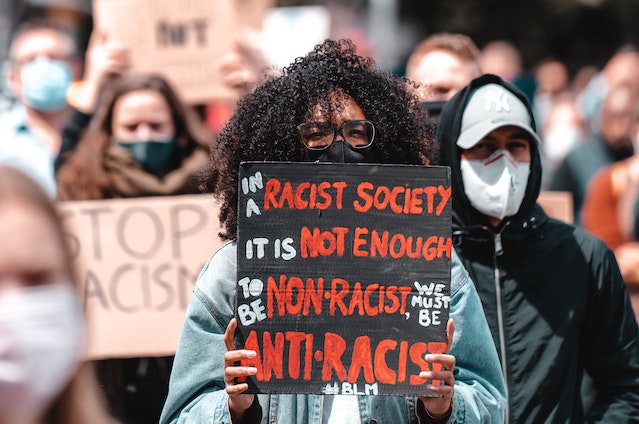 Photo by Joan Villalon on Unsplash; licensed under CC0.

“Racism is not getting worse, it’s getting filmed,” said Will Smith in August 2016.

Who could have imagined how true these prophetic words would become? Things are not worse; they are getting uncovered and the truth is almost unbearable to speak. For far too long, we have denied our racism—and when I use these first-person plural pronouns, I am not only referring to the United States in which I live, or global racism—I mean the church and its leaders.

Of course, I am neither the first one to do so, nor am I naming anything new. But Jesus in Matthew knows that human nature is wont to remain comfortable in our denial so as to avoid exposure. And that we are also quite adept at dodging disclosure, making up excuses for sidestepping the truth. What is getting exposed, of course, is not just racism, but our complicity. Not just how deeply systemic racism is, but how the church as an institution expertly harbors racism. Not just how the church has relied on white privilege, but how it has kept silent in preaching the truth of the Gospel.

I am receiving messages from former students who “dare” to preach about racism and people walk out and church councils ask whether or not their church should leave “the liberal ELCA.” I watched how members of my own denomination—in response to a sermon preached by the presiding bishop on Holy Trinity Sunday that linked the murder of George Floyd with the crucifixion of Jesus—debated whether or not the sermon aligned with Lutheran orthodoxy.

And therein exposes the church’s embedded license—the unchecked assumption that preaching about racism as a sin is a choice, not a mandate. That the meaning of the cross can only be about forgiveness of sins—and usually our own personal depravities, not corporate or systemic sins—conveniently forgetting that the cross first was an indictment of empire. We have reduced the cross to the means of salvation instead of how it rebukes tyrannical power.

The cross exposed that autocracy kills that which threatens its toppling; that totalitarianism silences that which rises up against it; that dictatorships sit on the neck of those whose suffering is inconvenient, whose voice for the powerless might elicit riot and resistance, expressionlessly, without empathy and without any will for the good of the whole, watching the laboring of breath and the slow ebbing of life. We cannot forget that this also is the good news of the cross.

Ibram X. Kendi argues that the heartbeat of racism is denial; the heartbeat of antiracism is confession.1 Being an antiracist, says Kendi, requires persistent self-awareness, constant self-criticism, and regular self-examination. Will the church and its subsidiaries engage in this kind of self-exposure? The Gospel has been hoarded, personalized, monetized, institutionalized, theologized, denominationalized–when in fact, it denunciates despotism. If the church cannot be the model for confession, then we have no right to claim that we are living out the great commission.

The time is now, dear Working Preachers, to hear Jesus’ words and do them: “What I say to you in the dark, tell in the light; and what you hear whispered, proclaim from the housetops.” No wonder three times in this passage we hear Jesus’ injunction, “do not be afraid.” There is a lot of which to be afraid these days, but it is not just the spread of COVID-19. It’s the insidious inability of those who profess faith in Jesus Christ to tell truth to powers that know not love.

Do not be afraid.