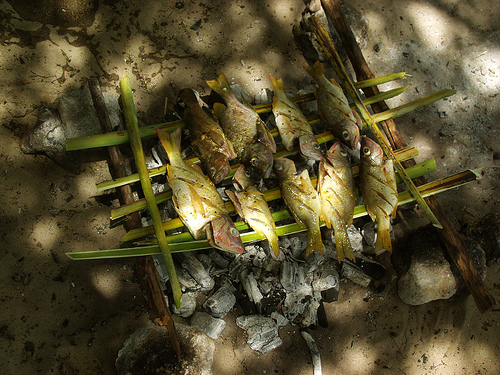 Fried Yellow Snapper on a beach near Lamu, Kenya(Creative Commons image by rogiro on flickr)

For years I’ve enjoyed calling John the “oddball gospel” because of its many idiosyncrasies.

John’s preference of the “beloved disciple” over Peter is one clear example – I mean, goodness, but not only is he the beloved disciple (which makes the others what, exactly…?) – but he beats Peter in their footrace to the tomb, and when he sees only the linen clothes left behind believes instantly whereas Peter is only confused.

Or consider the fact that John’s Jesus doesn’t do all that much. Compared to the synoptic versions of Jesus – where he is traversing all of Galilee and beyond in an almost frenetic series of healings, feedings, and more – John’s Jesus pretty much sits around and just talks … usually about himself! “I am … the good shepherd … the vine … the light of the world,” etc.

None of this diminishes John in my opinion. Rather, I think it makes the Fourth Gospel incredibly fun to read and preach.

Today’s reading offers one more example of John’s, well, peculiarity. Because whereas the other Gospels have Jesus calling and commissioning the disciples at the beginning of the story – makes sense, doesn’t it? – John puts that scene right at the end, in what most careful readers regard as the epilogue to his gospel. Bearing closest resemblance to Luke’s call-narrative (Luke 5:1-11), John’s story is presented as another resurrection appearance. But don’t be mistaken; it is also a commissioning story in its own right.

Or, maybe more accurately, it is a story of re-commissioning. After all, in John’s gospel it is only the beloved disciple who keeps faith with his Lord to the end, staying with him to the cross and taking Jesus’ mother as his own. All the others have fallen away. And so perhaps their failure to catch any fish not only serves as an occasion to elicit Jesus’ involvement in the miraculous catch of fish (and the subsequent revelation of his identity), but also represents their failure to remain faithful. Notice, in this regard, that Jesus invites them to try again, even after failing all night long.

Not only that, but once they have hauled their catch ashore, Jesus invites them to bring some of what they have caught and add it to what he has already provided for them. I think there is something powerful here, as Jesus not only provides for the disciples – in what is as close to Eucharistic sharing as you will get in John’s account – but also invites them to contribute what they have and, by extension, who they are. As they are join what they have to what Jesus provides, they are drawn back into the fellowship of those who not only see but also believe.

The scene with Peter is even more explicit and powerful. Three times Jesus’ asks Peter to confess his love. Three times Peter does, though by the third time he is disheartened, even hurt. But what Peter doesn’t quite catch in this moment the reader surely does. For the last time Peter was gathered around a charcoal fire was when he was in the high priest’s court yard and denied his Lord three times. So three times Jesus invites Peter to confess, symbolically wiping away the three times Peter denied.

Moreover, just as before, Jesus doesn’t merely provide, he also invites Peter’s participation by telling him to “feed my sheep.” Peter isn’t merely forgiven; he’s also drawn back into the discipleship community and given meaningful work to do.

Again, I think there is an important connection between this scene and our life of faith. We are commissioned at Baptism to share in the work and ministry of our Lord. And yet we often fall short, failing to give witness in word or deed to our faith in the living Lord. And yet Jesus doesn’t just commission us, Jesus also forgives us when we fall short. And Jesus doesn’t just forgive us, but calls us to try again. And Jesus doesn’t just call us to try again, Jesus also invites us to share what we have and gives us meaningful work to do.

Do you think our people are ready to hear that? That all their lives are potential arenas to add what they have to the bounty Jesus has provided in order that, together and with Peter, we may feed his sheep? I’m not sure. Ask most Christians and they have a hard time connecting what they do most of the week to their faith on Sunday. Which means we need to tell them, Working Preacher, maybe three times, maybe three hundred and three, that what they do matters. As parents or friends, employees or volunteers, citizens or neighbors, they are called to look for opportunities to care for the people and world God loves so much.

But don’t just tell them that, Working Preacher; also prepare them for failure. For we will fall short of our goals and aspirations. We will at times have to compromise. We will not always follow through. And we will time and again disappoint and even fall away. Which is why we not only need Luke’s story of commissioning, but also John’s of re-commissioning. Because Jesus does not give up on us. Ever! Rather, after each failure he invites us to try again, providing encouragement and nourishment – what else is our Sunday gathering? – and then calls us to add what we have and depart worship to meaningful work in the world.

So many of you have written me over the last three years to tell me that what I say at the end of most of these letters – that I am grateful for what you do, that your work matters, that God is working through you – is your favorite part of the letter. I do that, most simply, because I can, because I know how important and how hard and sometimes how lonely your work is. And I am glad to do it. This week, Working Preacher, I would invite you to do the same for your folks. Invite them through this peculiar story of John to hear Jesus commissioning and re-commissioning them again and again to work that matters.

They need to hear it, just as you do.

P.S.: Continuing our Easter pattern of inviting folks to consider to questions related to the upcoming week to prepare them to engage the biblical story more fully on Sunday morning, here are my suggestions for the coming week’s Gospel reading: